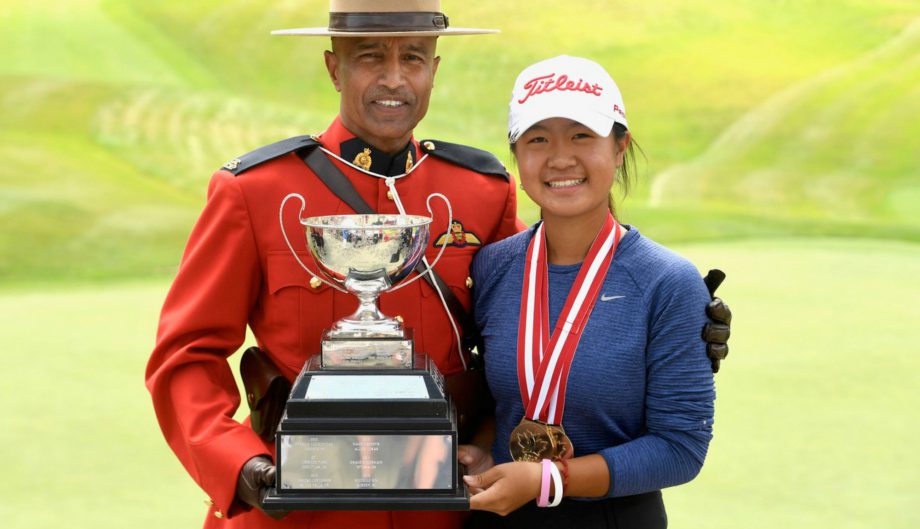 54-hole leader Susan Xiao from Surrey, B.C., didn’t blink in the final round of the 2017 Canadian Junior Girls Championship at Camelot Golf and Country Club carding a 3-under-par 69 to finish with a five-stroke victory.

Xiao started the day with a one stroke lead at 2 under par and was rock solid in Friday’s final round. She started with a birdie on No. 2 – then made eight consecutive pars before three straight birdies on holes 11, 12, and 13 to build a comfortable lead over the field.

“I am so honoured to win, words can’t describe how happy I am right now,” said Xiao. “This is definitely one of the biggest wins I’ve ever had.”

“We were walking off 17 green and they blew the horn so we had to come back. At first I was a little bit sad thinking it’s the last hole can’t we just finish but it’s better to be safe,” said a smiling Xiao from the 18th green after the closing ceremonies.

Xiao is the third straight British Columbian to win the Canadian Junior Girls Championship, following Team Canada’s Naomi Ko from Victoria in 2016 and Michelle Kim of Surrey in 2015. The 15-year-old also took home the juvenile championship for players 16-and-under.

Mary Parsons, a member of Team Canada’s Development Squad, from Delta, B.C., threatened to take the lead early in the day.

Playing in her last junior tournament she had birdie putts on No.9 and 10 that would have brought her to within a stroke of Xiao who made the turn at 3 under par. But Parsons was unable to make a charge playing the final eight holes even par.

“I could have sunk some more putts out on the course, I was inside five feet and 10 feet,” said Parsons. “But I’m really happy for Susan and everyone who played really well this week at Camelot.”

Parsons’ junior career has come to a close but the 18-year-old is looking ahead to the next chapter as she joins the Indiana University Hoosiers in the fall.

“I have one more tournament before college. I’m going to the U.S. Amateur in San Diego so I’m excited for that,” added Parsons. “Moving forward in my career it’s good to know I have the shots in my bag to succeed and I’m excited for college.”

London, Ont., native Ellie Szeryk was 2 under par through six holes and it looked like she would challenge Xiao for the title, but a bogey on No. 7 and a triple-bogey on No. 8 proved too much to recover from.

“After six holes, I thought all Susan does is hit it in the middle and on the green so I started to press,” said Szeryk. “My mental game is something I have to work on.”

Emily Zhu from Richmond Hill, Ont., finished tied for fourth at 2 over par, alongside Development Squad’s Monet Chun, also from Richmond Hill. Just 13-years-old, Zhu was in second with two holes to play before a bogey-bogey finish set her back.

With her victory Xiao earns an exemption into the 2018 Canadian Women’s Amateur Championship at Marine Drive Golf Club in Vancouver.