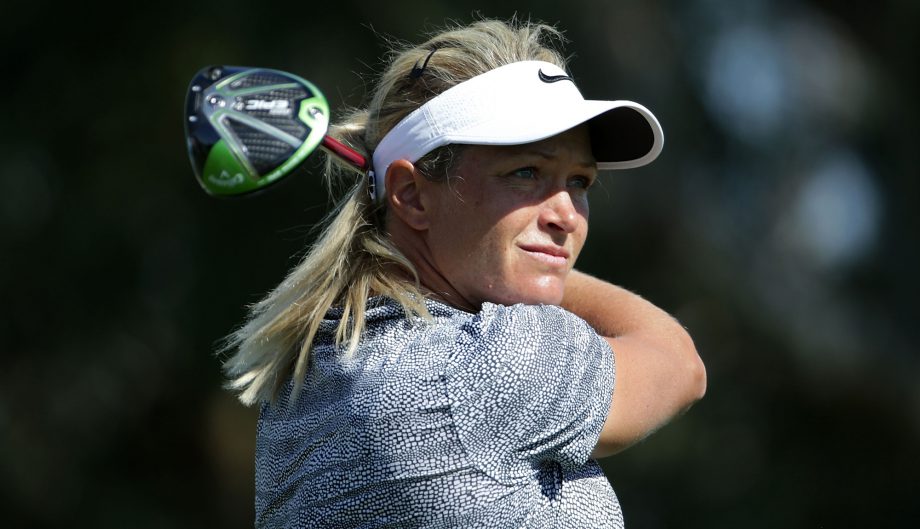 RANCHO MIRAGE, Calif. – While the entire field at the ANA Inspiration spent the whole day playing catch-up, Norway’s Suzann Pettersen and the Korda sisters managed to get ahead.

Pettersen finished her wind-delayed first round with a 4-under 68 and added a second-round 69 Friday, taking a one-shot lead over rookie Nelly Korda and five other players after two shortened days at the LPGA Tour’s first major of the year.

After an early end to Thursday’s play and a late start on Friday for cleanup from the windstorm, play was halted by darkness with 56 players still on the course. They will complete their second rounds Saturday morning.

“Towards the end of my second round, I was getting a little tired,” said world No. 1 Lydia Ko, who sat three shots off the lead at 4-under 140 after playing 31 holes Friday. “I played 31 holes in Thailand a few weeks ago, so compared to that, this is nothing. That week was a lot of undulation plus a lot of heat. … But it’s been such a long day, and I’m craving some sleep.”

Korda, Inbee Park, Michelle Wie, Cristie Kerr, France’s Karine Icher and Minjee Lee were all one stroke behind Pettersen when play was halted, but Wie and Icher hadn’t completed their second round.

Nelly Korda shot a pair of 69s to climb onto the leaderboard in her first major as a professional. The 18-year-old’s big sister, 24-year-old Jessica, also is in the hunt at 3-under 141.

Pettersen, a two-time major champion, capped her impressive day with a long putt for birdie on her final hole. She is feasting on the Mission Hills Country Club’s par-5s, getting three birdies on the course’s three longest holes in each of her rounds.

“I played fantastic golf all day,” Pettersen said. “You’ve got to be in the mood to fight if you’re a little bit out of position, so I did.”

The first round on Thursday was halted several hours early by 40-mph winds that whipped across the Coachella Valley until midnight. Bulldozers and trucks hit the Dinah Shore Course at dawn, removing a fallen tree and countless branches and leaves from the desert course.

Workers were quick, but the cleanup forced a 90-minute delay to the planned start of Friday’s play. At least the wind largely calmed down and left cooler temperatures at a tournament frequently played in a stifling dry heat.

Jessica and Nelly Korda are the daughters of former Czech tennis stars Petr Korda and Regina Rajchrtova. Their younger brother, 16-year-old Sebastian, is a promising teenage tennis player who just reached the semifinals of the Easter Bowl USTA Junior National Spring Championship just down the road at the Indian Wells Tennis Garden.

The Florida-based family is living in a house in the Palm Springs area for the week, relishing a rare chance for togetherness. While their parents drive between the tennis court and the golf course, the sisters have spent their down time playing with the family’s new Pomeranian – a future gift for their grandparents – and rooting loudly for their favourite players while they watch the Miami Open tennis on television.

“It’s really relaxing, to be completely honest,” Nelly Korda said. “Just chilling and hanging in my room, talking about our tournaments and catching up.”

Jessica Korda is extraordinarily proud of her kid sister’s strong start, but she’s also worried about their season-long bet: Whoever finishes lower on the money list this year has to buy an expensive purse for the other.

Ko and world No. 2 Ariya Jutanugarn are both at 4 under, along with Lexi Thompson and Paula Creamer.

Hamilton’s Alena Sharp was the only Canadian to complete 36 holes. She shot a 4-over 76 and is 6 over. Maude-Aimee Leblanc of Sherbrooke, Que., is 8 over and Brooke Henderson of Smiths Falls, Ont., is 3 over, but both golfers have to finish their second round.

Icher left the course Thursday with the first-round lead, but when first-round play finished near lunchtime Friday, she had been joined by Kerr and Germany’s Caroline Masson at 5 under.

Park charged into the lead with two birdies and an eagle on the first six holes of her second round. The seven-time major champion and 2013 winner of this event finished with a pair of 69s.

Park took six months off from golf after winning a gold medal at the Rio de Janeiro Olympics last summer, healing her injured thumb. While some wondered whether her career was over, she has returned in outstanding form, winning the HSBC Women’s Champions in Singapore four weeks ago.

“Just looking at the scores, everybody can think it was a good round, but actually (it was) really a nightmare for me on the greens,” Park said. “I struck the ball great. I’m really happy the way I’m hitting the ball, but just putting was very disappointing.”