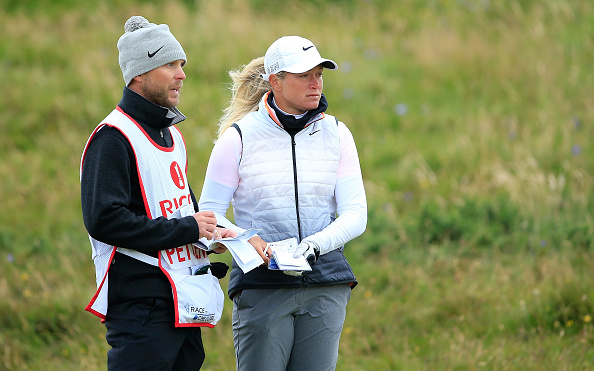 TURNBERRY, Scotland – If the first day of the Women’s British Open was all about Donald Trump, the second day belonged to Suzann Pettersen.

The Norwegian took a two-stroke lead into the weekend after being one of just two players to break 70 in a soggy second round at Turnberry that left many in the 144-woman field scurrying for shelter and bemoaning the un-summerlike conditions.

Out at 6.41 a.m. Friday in the second group, Pettersen shot a 3-under 69 for a score that only looked better and better as a grueling day on the wind-beaten Ailsa links wore on. Maria McBride of Sweden was the only player to beat Pettersen’s score with a bogey-free 66 but was still way off the pace after an opening-round 79.

“I was in 100 percent control of the ball, the flight, the spin, everything you need to do in conditions like this,” said the sixth-ranked Pettersen, who called it one of the best rounds of her career. “It felt like I was pulling off every shot I was standing over.”

Pettersen’s 7-under 137 put her two shots clear of a quartet tied for second that included Lydia Ko, who shot a 73 in some of the worst conditions in the afternoon, when the winds swirled and gusted up to 25 mph.

“I was eating my sandwich – my bread was getting wet in the rain,” said the 18-year-old Ko, who wore four layers of clothes, hand warmers and ear muffs at times during her round.

Teresa Lu (71) of Taiwan and South Korean pair So Yeon Ryu (72) and Jin-Young Ko (70) were also on 5 under with Ko, who is trying to become the youngest winner of a major.

Top-ranked Inbee Park, seeking to complete the career sweep of the majors, shot a 73 to sit five strokes off Pettersen. Michelle Wie withdrew after aggravating a left ankle injury when she slipped to the ground as she walked off the 13th tee.

Defending champion Mo Martin shot an 80 and missed the cut, which was at 5 over, as did Morgan Pressel, Paula Creamer and U.S. Solheim Cup captain Juli Inkster.

Golf reclaimed center stage after the Donald Trump Show on Thursday. The American presidential contender, who owns Turnberry, had made the opening round of the year’s fourth major a mere sideshow by landing in his private helicopter during play and grabbing the attention of the media by continuing his election campaigning in the plush hotel overlooking the course.

The Republican was less conspicuous on Friday, although his cell phone went off as he watched Martin tee off at No. 1.

Instead, it was Pettersen who hogged the spotlight.

On a day when more than a quarter of the field shot 80 or higher, Pettersen tamed a course she described as a “beast.” She hit an 8-iron to three inches on No. 2 for the first of four birdies in her round, and emerged from holes 12-18 – playing into the wind – 1 under par.

Pettersen is oozing confidence right now. A switch of coach at the start of the year, from David Leadbetter to Butch Harmon, has led to a minor change in her swing and major change in her mentality.

“I always thought playing through the Olympics (in 2016) would be a good goal for me,” Pettersen said. “But now, feeling and seeing what I can do differently and how easy I can do stuff, it definitely has changed my perspective of my own career.

“I have a lot of goals left out there that I want to achieve.”

First-round leader Hyo-Joo Kim dropped seven shots in her last eight holes for a 78, to slip to 1 under.

McBride’s score in a round that finished in the gloom was scarcely believable, given what had happened to the rest of the field.

“It’s one of the worst rounds I’ve played, conditions-wise,” said the Swedish player. “It’s probably the best round ever in my golfing career.”

Canada’s Brooke Henderson and Alena Sharp make the cut to the weekend. Henderson signed for a round of 3-over 75 and sits 4-over for the tournament. Sharp sits at 5-over after a second-round 77.