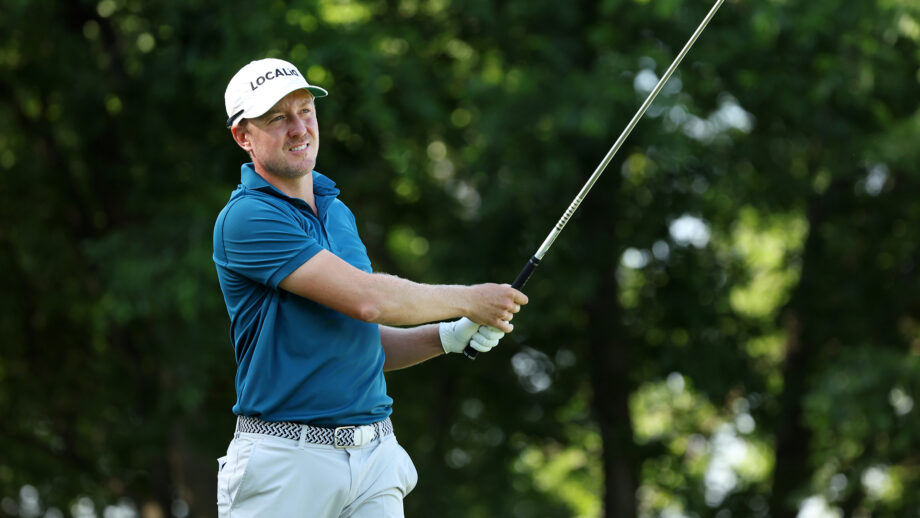 MCKINNEY, TEXAS - MAY 12: Jonas Blixt of Sweden plays his shot from the fifth tee during the first round of the AT&T Byron Nelson at TPC Craig Ranch on May 12, 2022 in McKinney, Texas. (Photo by Gregory Shamus/Getty Images)
John Chidley-Hill/ Canadian Press

MILTON, Ont. – Jonas Blixt has always struggled with overthinking on the golf course.

But the Swede cleared his mind on Monday for two rounds to finish atop the leaderboard in a U.S Open qualifying tournament at RattleSnake Point Golf Club. Blixt was tied for the lead after the day’s opening round and finished the day alone at No. 1 with an overall score of 10 under.

“Today I was just going to go out there and not think too much technically, and just play,” said Blixt with several players still out on the course. “I had some gnarly shots, but I saved myself and made some putts and things are going a lot better with my game.

“It was nice to see that today no matter what happens.”

Blixt is playing this season on a major medical extension. He’d missed several weeks of the PGA Tour season before competing in Monday’s qualifier and found playing 36 holes in a single day tiring.

Fortunately for him, the forecast called for heavy rain on Tuesday, giving him a ready excuse to miss practising at St. George’s Golf and Country Club to prepare for this week’s RBC Canadian Open.

“I’m going to be in my bed for a long time,” said Blixt with a laugh.

England’s Callum Tarren and Japan’s Satoshi Kodaira tied for second a shot back of Blixt to earn the other two U.S. Open berths.

It’s only the second time a U.S. Open qualifier has been held in Canada, with RattleSnake Point also hosting the event in 2019.

Jared du Toit of Kimberley, B.C., had to settle for one of two alternate spots after he bogeyed No. 18. Derek Bard of the U.S. took the other alternate spot for the third major of the men’s golf season, tying du Toit at 7 under.

Du Toit earned the first alternate position ahead of Bard after a three-hole playoff in the driving rain. That put du Toit in a solid position to still play in the U.S. Open at The Country Club in Brookline, Mass., June 16-19.

“Oh it was not fun, especially bogeying my last hole to cause all that. It was kind of a punishment for bogeying the last hole,” said du Toit of the playoff. “I’m very fortunate that bogey didn’t really cost me and I was able to give myself some good looks in the playoff and then convert with a birdie.”

Three players withdrew from the qualifier on Monday morning, reducing the field to just 22 players despite having three berths at the prestigious U.S. Open on the line. There were eight other qualifiers happening across the U.S. on Monday, with the field in Canada the smallest.

“When I heard there was 27 players I thought there’d be only one spot and then to hear three I was like ‘holy moly!” said Tarren, who was originally scheduled to play in the qualifier at The Club at Admiral’s Cove in Jupiter, Fla., on Monday.

“But my caddy was like, ‘you may as well play in Canada because we’re playing the Canadian Open this week.’ So I changed it and it’s paid off.”

There were nine Canadians playing at RattleSnake Point. Toronto’s Riley Goss tied for sixth at 6 under and Michael Gligic of nearby Burlington, Ont., tied for 12th at 4 under.

Du Toit said that having a U.S. Open qualifier on the Monday before the Canadian Open and only a short drive away is helpful for growing the sport in Canada.

“It’s a great fit in the schedule with the Canadian Open being here,” he said. “The strength of field is great, which a lot of guys really liked.”

David Hearn of Brantford, Ont., and amateur Owen Mullen of Truro, N.S., who were paired together, tied for 15th at 3 under.

Branson Ferrier of Barrie, Ont., was 18th at 2 under, Brendan Leonard of Cambridge, Ont., was 19th at 1 under. David Li Sheman of Aurora, Ont., and Hamilton’s Michael Blair tied for 20th at even par.