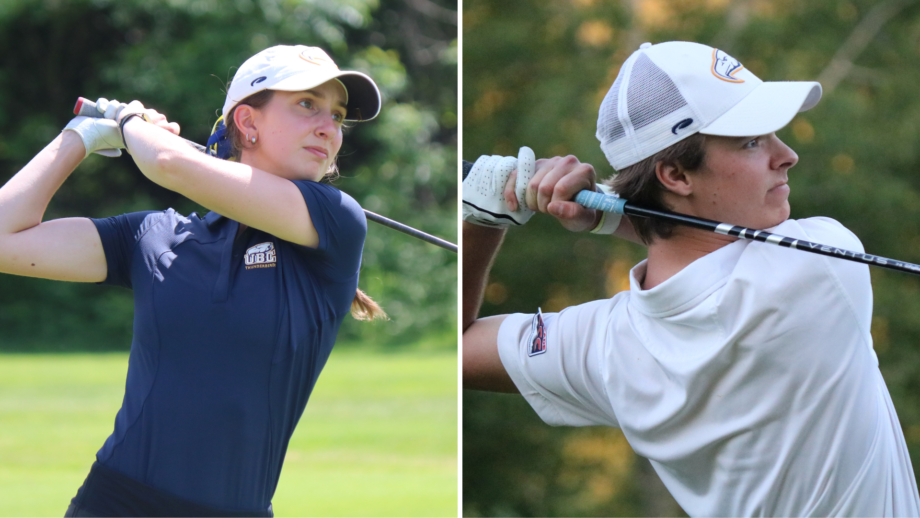 Bromont, Que. – It was a rainy morning, but the University of British Columbia Thunderbirds continued to shine in the third round of the 2022 Canadian University/College Championship, presented by BDO at Golf Château Bromont.

On Saturday afternoon, the Thunderbirds will attempt the four-division sweep, looking to become only the second group in the history of the event to do so, and first since 2016. As it stands, UBC leads in the men’s and women’s team divisions, while Thunderbirds Élizabeth Labbé and Aidan Schumer sit atop the individual standings.

The T-Birds women’s team built on their notable lead in round three, which now stands at 77 strokes, just nine shy of breaking the record for the largest margin of victory in any of the team divisions at the event since 2004. That year, the Thunderbirds won by 135 shots.

The men in blue and gold stayed steady in round three shooting a combined 4-under 284, but it was the team in red and gold from Université Laval who made the biggest splash on moving day, combining for a 9-under 279.

Alexis Leray, who has flown under the radar all week, piloted his Laval team with a 4-under 68, and re-entered the conversation in the men’s individual competition. The 2021 RSEQ Champions will, however, need to make up at least six more shots on the T-Birds in the final round for any hope of a national championship.

Schumer, who finished birdie-birdie on holes No. 17 and 18 to take the outright lead, holds a one-shot advantage over Leray and Samuel Breton Gagnon (Champlain St-Lawrence) ahead of the final round.

“It’s just like with running; if you run more, you’re going to get faster. You’re to get better at anything you train, including your mind,” said Schumer on visualizing winning a national championship. “I definitely enjoy being in this position and regardless of the outcome, it’s been a really good week with the guys. Hopefully I can put together one more good round.”

Labbé stretched her lead to four strokes in the women’s individual competition with an even-par 72. Round three was a rollercoaster ride for the Lévis, Que., native, who made three bogeys out of the gate, but negated the slow start with five birdies coming in.

“I’ve been having a little more trouble settling into my last two rounds, so I’ve just been trying to be patient,” said Labbé. “Obviously the pins today were a little bit trickier and a little bit harder to reach, so I just stayed patient and I knew it would balance out.”

The Thunderbird, who has lead wire-to-wire thus far, says she feels more and more comfortable playing with the lead and for now, is simply focusing on what she can control: her own game.

As for scoreboard watching tomorrow, there won’t be any for Labbé – “I’m just going to do my thing and hope for the best,” she said.

Sonja Tang is four back of her teammate entering the final, while Shania Remandaban and Grace Bell round out the all-UBC top four in the women’s individual division.

A heavy rainfall early Friday morning delayed the start of the third round. With all hands on deck, the grounds crew took the necessary actions and the course was deemed playable at 9:30 a.m.

“Patrice Fredette and his team did an outstanding job of providing playing conditions worthy of a Canadian Championship,” said Martin Ducharme, general manager of Golf Château Bromont. Unfortunately, Mother Nature didn’t contribute to the start of the third round, but the grounds crew did the necessary work, and I would say a miracle to get the course back in shape.”

As a result of the morning delay, the gas tank on daylight ran dry and forced a stoppage to round three at 8:31 p.m. due to darkness. Play resumed at 7:30 a.m. Saturday morning and wrapped up at 8:15 a.m.

A quick turnaround is in the works as the final round is scheduled to tee off at 10:00 a.m.

Click here for more information including the leaderboard, final round pairings and course information.