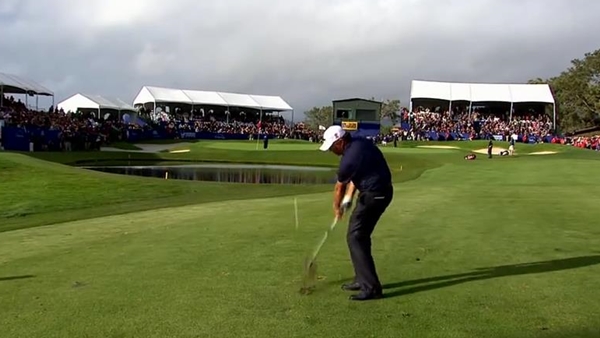 During final round coverage of the championship, a highlight from a past broadcast sparked a rules debate, specifically with reference to Rule 17, The Flagstick.

The fuel for said rules debate was provided courtesy of a CBS flashback to the 2011 Farmers Insurance Open, where Phil Mickelson needed to hole his approach for an eagle on the 72nd hole to force a playoff.  Mickelson sent caddie Jim ‘Bones’ MacKay forward to attend the flagstick as he prepared for his eagle opportunity from approximately 75 yards. Here’s footage of the play.

Rule 17-1 (Flagstick Attended, Removed or Held Up), provides the following explanation of actions pertaining to attending the flagstick:

Before making a stroke from anywhere on the course, the player may have the flagstick attended, removed or held up to indicate the position of the hole.

Based on the standards set forth in Rule 17-1, Mickelson was entitled to have Bones attend the flagstick and was required to have him do so before he made his approach shot.  You’ll notice that Bones does a diligent job of vacating the area where he was attending the flagstick, in an effort to avoid a breach of the Rules, under Rule 17-3 (Ball Striking Flagstick or Attendant), which states:

The player’s ball must not strike:

a. The flagstick when it is attended, removed or held up;

b. The person attending or holding up the flagstick or anything carried by him; or

c. The flagstick in the hole, unattended, when the stroke has been made on the putting green.

Exception: When the flagstick is attended, removed or held up without the player’s authority – see Rule 17-2.

Match play – Loss of hole; Stroke play – Two strokes and the ball must be played as it lies.

Interestingly enough, while some thought Mickelson and Bones pushed the envelope on having the flagstick attended in this situation, the player and caddie are also entitled to also indicate a line of play, under Rule 8-2 (Indicating Line of Play).  Given that Mickelson’s ball lay off the green, he would be entitled to have Bones touch the putting green to indicate a line of play as long as any mark placed to indicate the line of play is removed prior to the stroke being made.  This situation is contemplated in Decision 8-2b/3, which states:

Q. The caddie of a player who is preparing to play a chip shot from off the putting green touches the green with a club to indicate the line of play. What is the ruling?

While the mid-handicapper might not benefit from such advice, indicating a line of play, you can see from the video that Phil is dialed-in to within mere yards of the flag on his approach.

Back to the 2014 Farmer’s Insurance Open… Marc Leishman did provide a worthy attempt to hole out, just as Phil did circa 2011, to force a playoff with Stallings. Like Phil, he too missed.

Next time you find yourself looking to hole out, be sure to exercise your rights under Rules 8 and 17.