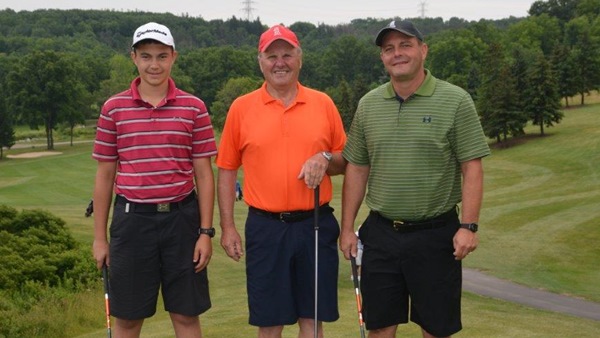 It’s as easy as one, two, three for the Tam Family when it comes to playing golf at King’s Forest Golf Club in Hamilton.

Forty years ago in 1974, John Tam signed up as one of the club’s very first members, when he switched his membership to the City of Hamilton’s newest municipal golf course, after being a member at its sister club since 1966.

At the time, the steelworker, who would go on to retire from Stelco in 1997, never thought his passion for the game would become a family affair, but today he looks back with only fond memories as he tees off with his son Paul and his grandson Michael.

“When I was really young my dad would bring me out and I would walk a few holes with him and just hit the ball,” says Paul, who is a Grade 7-8 teacher at Our Lady of Peace Catholic Elementary School in Stoney Creek. “Then, when I was in Grade 7 in 1983, he bought me a junior membership and I have been here since then.”

As it turns out, Paul has two children, Isabel, who is 11-years-old and plays rep soccer with dad as coach, and Michael, 14, who is walking in his grandfather’s and father’s footsteps. “When Michael was in Grade 7 I decided it was time to buy him a junior membership at King’s Forest and since that time the three of us have had a great time golfing together.”

Their summer golf routine is pretty amazing. They play 18 holes together three times a week and Grandpa John is usually out there with friends on the other weekdays. Michael also plays a few holes with his grandfather in the evenings. The Grade 10 student at Cardinal Newman CSS in Stoney Creek caddies twice a week at Hamilton Golf and Country Club, where he makes $32 for looping 18 holes plus tips.

The trio are quite funny and when asked what they think each other’s Golf Canada handicap factor might be. They all have a different number in mind for each other. To avoid a family scrap, we’ll say it’s in the teens for each of them, but the question of who is the best golfer in the group will surely be debated for years. They are definitely competitive. John says Michael is a “Wildman”, Paul says Michael is “erratic”, Michael says playing with dad and grandpa is “painful.” They all laugh. “I’m really lucky to spend this time with them. A lot of other juniors at the club aren’t out here with their parents, let alone grandparents,” Michael says. Paul says golf has allowed the trio to be best friends. John, who is 74 years-old, says it’s a “Godsend.” They walk all of the time – no carts for these boys!

John hasn’t added up the number of rounds he’s played at King’s Forest, but at an average of 100-plus rounds a year for 40 years, there were some years he had to buy two memberships because he was playing so much, John has played more golf at King’s Forest than any other person on his earth.

Not surprisingly, John has also collected four aces at King’s Forest, which he calls his second home, over the years with one on No. 5, two on No. 14 and once on No. 17. At home, his wife Marisa doesn’t mind when John leaves the house at 6 am to play golf. She continues to welcome him back later in the day with a smile, unless he’s gone to play racquet ball at the YMCA, but that is another story for another day.

The scenic layout at King’s Forest was designed by former parks foreman Matt Broman, who was 76-years-old at the time, with the guidance of Rod Goodes, the Head Professional at Chedoke Civic Golf Club from 1965 to 1990. The design was monumental for its day. It measured just over 7,000 yards, par-72 from the tips over a rolling 250-acre landscape that featured a variety of terrific elevated tee shots, several challenging doglegs and six holes crossing the naturalized Red Hill Creek. It’s interesting to note that the two courses and 36-holes at Chedoke Civic GC are laid out on just over 220 acres!

“It’s a beautiful spot, but it’s getting harder, or maybe it’s just my age,” John says. “It was pretty wide open when I first came here 40 years ago and now the trees have grown up just like my son and his son – it’s a great place to call home.