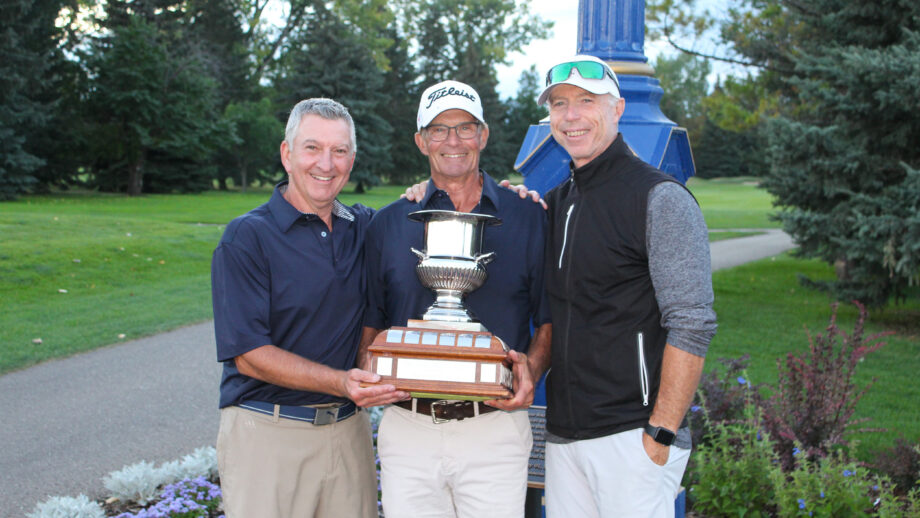 Prevailing winds continued to challenge competitors at Red Deer Golf and Country Club as the 60th edition of the Canadian Men’s Senior Championship, presented by BDO, wrapped up the second day of play in Red Deer, Alta.

Host squad Team Alberta ran away with the lead to win the 36-hole inter-provincial team competition in an impressive 11-stroke victory over runner-up Team British Columbia. Ken Griffith (Red Deer Golf & Country Club), Senan Foley (Public Player – Alberta), and Kelly Risling (Medicine Hat Golf & Country Club) shot a collective one under to give Team Alberta the back-to-back victory as they defended their 2019 title and claimed the Phil Farley Memorial Trophy (the Inter-Provincial competition wasn’t contested the past two years due to complications caused by the Covid-19 pandemic). Rounding out the top 3 was Team Ontario carding a consolidated score of +12.

In the individual competition, American Mike Lohner extended his stay at the top of the leaderboard, earning sole possession of first place after Rusty Strawn (McDonough, Ga.) fell one shot back after a seesaw round of four birdies and three bogeys at Red Deer Golf and Country Club. Lohner, a resident of Southlake, Tex. carded five birdies to remain steady and set himself up well after the halfway point of the tournament.

Strawn and Red Deer Golf and Country Club member Ken Griffith share second place, coming in at 4-under after Wednesday’s round.

Following the conclusion of round two today, the field was reduced to the low 70 players and ties with 72 competitors advancing to bid for the 60th Canadian Men’s Senior Championship title and a coveted spot on the John Rankin Memorial Trophy. The individual champion will also receive an exemption into the 2023 U.S. Senior Amateur Championship.

Round three is set to commence tomorrow at 8:10am MT.