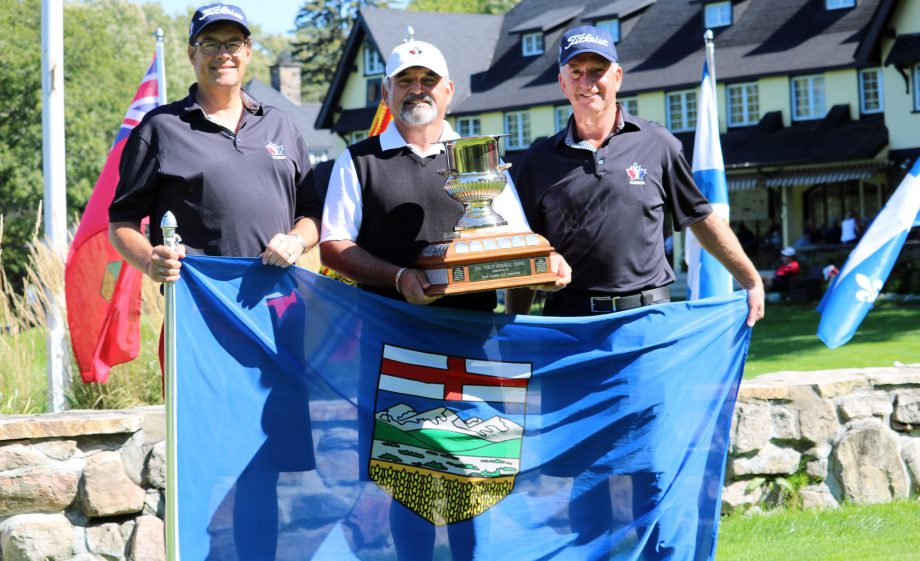 The trio of Frank Van Dornick (Camrose, Alta.), Brian Laubman (Edmonton) and Ken Griffith (Red Deer, Alta.) posted a combined second-round score of 1-over 141 to capture the Phil Farley Trophy with a total of 283 (+3).

The squad finished 12-strokes ahead of runner-up Team British Columbia, which was comprised of Canadian Golf Hall of Fame member Doug Roxburgh (Vancouver), John Gallacher (Burnaby, BC) and Greg Bismeyer (Mission, B.C.) The team had a two-day total of 295 (+15).

In the 65-and-over Super Senior Division, Paul Simson of Raleigh, NC., claimed a one-shot victory over Lance Lundy of Pemberton, B.C. Simpson carded matching rounds of 71 to finish at 2-over 142 for the victory. With the Super Senior title under his belt, the 65-year-old will now set his sights on another trophy.

“The conditions were a little more difficult today and the wind was blowing, which caused some problems,” said Simson, who in 2010 made history by becoming the first person to win the British, U.S. and Canadian senior titles in the same year. “But I’ll take the win. It’s always nice to win something. I’m going to focus over the next two rounds and hopefully I can take home the Senior title, too.”

Lance Lundy of Pemberton, B.C., was leading the Super Senior category after the first round at even-par, but a 3-over 73 dropped him into second at 3-over 143.

Frank Van Dornick of Camrose, Alta., finished third at 4-over 144.

Doug Hanzel of Savannah, GA, took the overall lead in the Senior Division. He’s even for the championship at 140.

“I was very steady all the way around,” said Hanzel, who is the lone player not over par. “I hit 16 greens in regulation today. The greens are tough, you need to nail the speed and the line. But I’ve been putting the ball in good spots. If you don’t, you have some work left to make par.”

Simson and Brian Laubman of Edmonton share second at 2-over 142.

A total of 71 players finished 155-or-better to advance past the 36-hole cut. The third round will begin Wednesday at 8 a.m. EDT.

The winner of this year’s championship will earn an exemption into the 2018 U.S. Men’s Senior Amateur Championship at Eugene Country Club in Eugene, Ore., from August 25th to 30th.

Additional information, including tee times, for the Canadian Men’s Senior Championship can be found here.