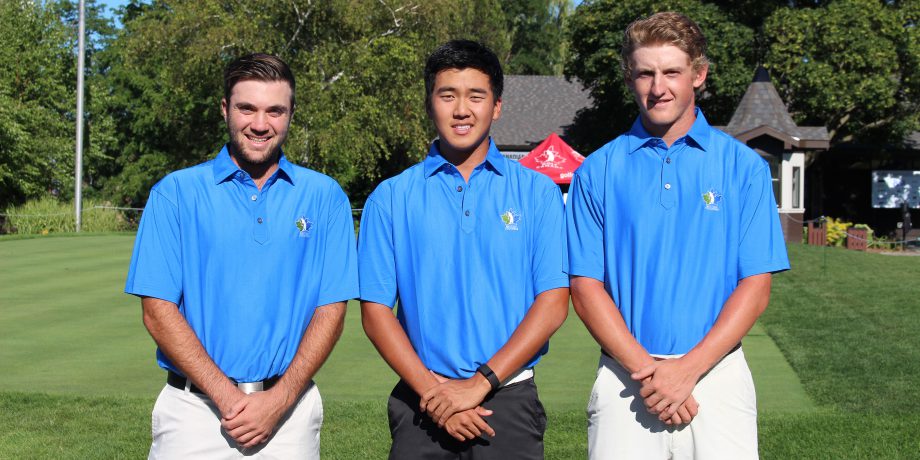 “It was a nice little surprise to wake up to,” said Stuart Macdonald of the winning team. “It feels awesome. We’ve joined some good names up there [in the championship’s history]. I know B.C. has had some pretty good runs with the Willingdon Cup. I thought we had a pretty good team this year.”

The native of Vancouver spoke highly of his teammates – Kimberley, B.C., product Jared du Toit and Maple Ridge, B.C., native Kevin Kwon – when reflecting on their time together. “I felt like we had the three best in the province. I’ve played with Jared in the past and we play a lot with each other. I hadn’t really played with Kevin too much. I’ve always seen him up at the top in a lot of B.C. tournaments. I got to know him pretty well and we’re all good friends now. I think we had a lot of camaraderie between the three of us.”

Since 1927, the Willingdon Cup has been awarded to the provincial or territorial team with the lowest scores from the first 36 holes of the Canadian Men’s Amateur Championship. The top-two daily scores from each round of the twelve three-man teams counted towards the competition.

Billy Kennerly opened the day in third, but supplanted the two 36-hole co-leaders with a 3-under 69 performance. “I played really solid today. I was trying to keep it around par, to be honest. It’s definitely a lot firmer out there today than yesterday.”

The native of Alpharetta, Ga., tallied five birdies on the day, including a 3-under 33 across the front nine. The graduate from Clemson University remained poised when asked about the possibility of victory. “It would be a great honour, but of course, we have a lot of golf ahead of us. [Winning] would be a great boost and I feel really good about my game, so we will see how it all goes.”

National Team Development Squad member Patrick Murphy totaled five birdies, including an impressive four-in-a-row on his final four holes to ascend the leaderboard. The Crossfield, Alta., native’s 3-under performance has him in second place at 6-under. A single shot back in third is Ben Eccles, who began the day tied for first. The Australian is 5-under 210 in the competition.

Buoyed by the team-competition win, MacDonald shot the low-round of the day, a bogey-free 5-under 67, to move into a tie for fifth. “I started off solid. I just really kept the ball in play in the fairway and gave myself a lot of opportunities,” said the Purdue University Boilermaker. “I took advantage of the par-5s. The par-5s out here are mostly reachable. So if you can do that, you can get a good number out here. I putted pretty solid. Overall, I’m pretty happy with the round, happy that I can be up on the leaderboard and maybe have a chance tomorrow.”

The winner of the 111th playing of the Canadian Men’s Amateur Championship will earn the Earl Grey Trophy and gain a prized exemption into the 2016 RBC Canadian Open at Glen Abbey Golf Club in Oakville, Ont., and entry into the 2015 U.S. Amateur Championship at Olympia Fields, Ill. The champion will also be eligible to receive an exemption into the U.S. Junior Amateur, the U.S. Mid-Amateur or the U.S. Senior Amateur, if applicable.

Additional information regarding the 2015 Canadian Men’s Amateur Championship, including tee times and scoring, is available here.