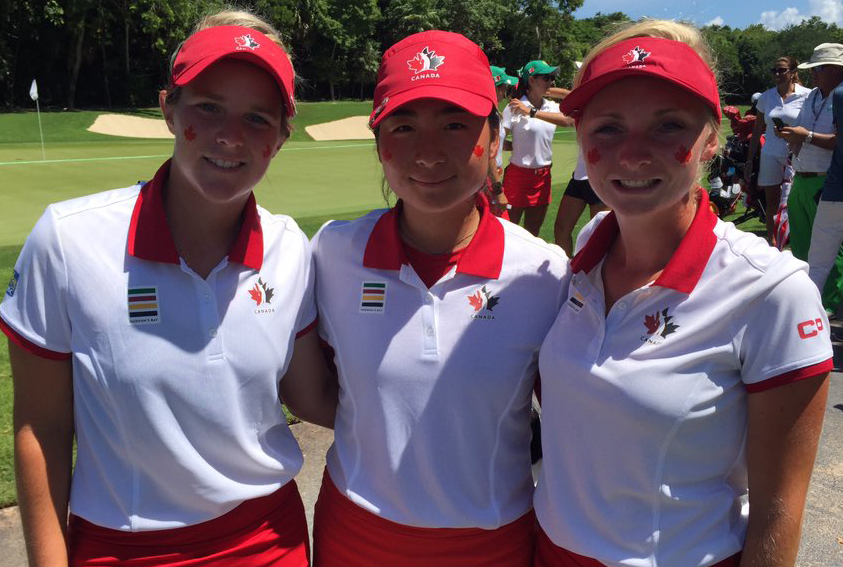 RIVIERA MAYA, Mexico – The Canadian trio held their ground in Saturday’s final round at the World Amateur, posting a 1-under score to finish inside the Top-10 in 9th place, climbing back from a T23 standing after the first round.

The Canucks were once again led by the red-hot Naomi Ko of Victoria, B.C., who closed with a 2-under 70. The reigning Canadian Junior Girls Champion finished the event with a share of 6th place at 6-under par (75-66-71-70).

“I’m very proud of our girls and the way they continued to battle each round,” said Tristan Mullally, Team Canada’s Head Coach. “We were a bit behind after the first round but it says a lot about this team that we climbed back to a strong finish inside the Top-10.”

Korea’s Hye-jin Choi saved her best golf for the final round, firing a 5-under 67 to earn medalist honours at 14-under. Choi, the defending Canadian Amateur champion, earned a two-stroke victory over runner-up Puk Lyng Thompsen of Denmark. Canada’s Brooke Henderson of Smiths Falls, Ont., captured the individual title in 2014 by three strokes.

The Republic of Korea won its fourth Espirito Santo Trophy by a record-equalling margin with a 72-hole total of 29-under-par 547 at the 27th Women’s World Amateur Team Championships at Mayakoka El Camaleon Golf Club.

“The key is the team play,” said Korean captain Sang-Won Ko. “We have been interviewed over the last few days and the players have been so focused on team play. That makes everyone tight and makes for good results.”

“I travel a lot and the first question is always ‘Why is your women’s game so strong?’ And my first answer is we have a greater number of players and they are trying really hard,” said Ko. “Their target is to turn professional. We may be a small country in terms of the land and the population but we have more than 3,000 junior players and they are willing to turn professional, which is really a huge number compared to the U.S. and Europe so that’s why I believe our women’s golf is strong.”

Korea’s 21-stroke margin of victory over second-place Switzerland tied the championship record set by the USA in Chile in 1998. The 72-hole total (547) is also tied for second-lowest score by a champion. The lowest winning score was 546 by the Republic of Korea in 2010, when they won by 17 strokes.

The nation has finished in the top 10 in 12 of its 14 appearances. The Koreans are tied for fourth in most overall WWATC medals with Sweden and Great Britain and Ireland. Only the USA, with 13, has won more gold medals than the Koreans.

After three rounds, the Koreans held a 14-stroke cushion over Switzerland but, in the fourth round, they kept their low-scoring pace as Choi, the 2016 U.S. Women’s Open low amateur, and Park, the 2016 Australian Women’s Amateur champion, shot 6-under 30 and 4-under 32, respectively, at the par 72, 6,295-yard/5,752-meter Mayakoba El Camaleon Golf Club.

The other course used for the championship was the par 72, 6,167-yard/5,637-meter Iberostar Playa Paraiso Golf Club

“We did really well last time (third in 2014), but we couldn’t do as well as we hoped,” said Choi. “But this time we really did our best and we performed really well, so I am very happy now.”

Although there is no official recognition, Choi led the individual scoring with a 14-under-par total of 274.

Sisters Kim and Morgane Metraux, shot 69 and 72, respectively, for the Swiss, who won their first medal in 23 appearances, with a best finish of tied for fourth in 1988. This marks their fifth top 10 finish.

“It feels great,” said Kim, who plays at Florida State University with her sibling and teammate. “We never thought we would win a medal before coming here. We came with no expectations, just to play as well as we could. It’s incredible that we have won a medal.”

“It’s a great historic moment for Switzerland,” said Swiss captain Annette Weber. “The players performed great in very hot conditions and I am very proud of this team for winning the silver medal.”

In a dual that lasted most of the afternoon, Ireland, on the stellar play of Olivia Mehaffey (4-under 68) and World Amateur Golf Ranking No. 1 Leona Maguire (3-under 67), claimed third at 569, edging past Denmark in fourth at 570 and Thailand in fifth at 571.

Ireland also won its first medal in its seventh appearance but it did compete as a part of Great Britain and Ireland from 1966 through 2004. Its best finish previous finish was T-11th in 2010.

“I’m just so proud of them,” said Irish captain David Kearney. “We have got three amazing girls there, just incredible girls. They are all very serious about their golf and they work incredibly hard all year round when they are not at tournaments. I’m just delighted for them. It’s just brilliant.”

With Switzerland’s and Ireland’s respective second- and third-place finishes, 20 different countries are in the official medal count.

The men’s World Amateur Team Championship will follow the women’s event, running from Sept. 21-24. Canada will send Jared du Toit, 21, of Kimberley, B.C., Garrett Rank, 28, of Elmira, Ont., and Hugo Bernard, 21, of Mont-St-Hilaire, Que., to compete for the Eisenhower trophy.