Team Canada goes for gold at Pan Am Games 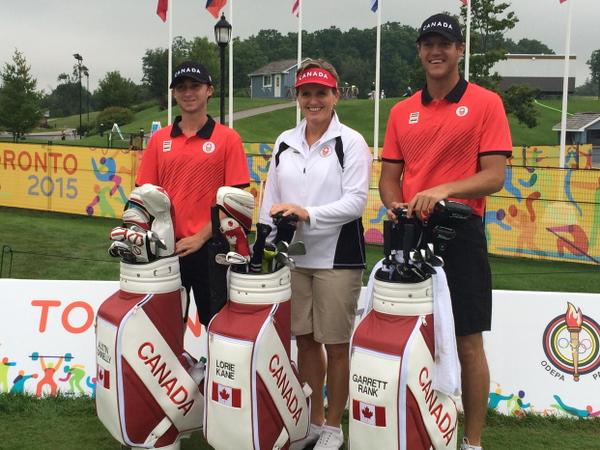 While most of the golf world went to sleep Wednesday dreaming of the third major championship of the year and Scottish greens, Austin Connelly, Garrett Rank, and Lorie Kane did not.

Instead, they were getting ready for the Pan American Games, and dreaming of gold, sliver and bronze.

The three aforementioned golfers will represent Canada when the golf portion of the 2015 games begins Thursday. It will wrap up Sunday afternoon.

Brooke Henderson was supposed to round out the foursome but withdrew June 29th to concentrate on her professional career.

However, on a conference call with Canadian media Wednesday, the conversation had shifted away from who wasn’t there to who were, and what they were trying to accomplish this week.

“It’s too bad for Brooke that she’s not here, but we’ve got a really strong team in myself and the two guys across the table from me. We do have an opportunity to still medal,” Kane said. “I understand Brooke’s situation and it’s a difficult one, but this is where we are.”

“I’m going to tee it up tomorrow as part of Team Canada and I’m going to do my best, as will the other two guys here, and we’ll see how it goes,” she continued.

Rank, Connelly and Kane will combine their scores for the team portion of the competition, while Rank and Connelly will try for a medal on the men’s side, and Kane will go for gold on the female side of the draw.

To get to this point, Derek Ingram – the men’s coach – said the process is something that has been in the works for several years.

“We’ve been preparing a lot of things behind the scenes for a long time – two years or more in some cases – so it’s nice that it’s finally arrived,” he said. “We’re down to crunch time and playing golf, which is what everyone loves to do.”

Mullally, Golf Canada’s women’s national team head coach, will concentrate on Kane over the four days of competition. He admitted there is much more happening now than at a regular golf event.

“We’re part of a team and that’s a great honour, but there are lots of great athletes around. There are people here who are sporting legends and heroes,” he explained. “We’re doing everything we can to make sure these guys can go play and that’s what they will do. And, they’ll do it well.”

Despite the excitement for the Pan Am Games, Connelly and Rank will both be making their debuts at the RBC Canadian Open next week. That said, they both are committed to focusing on one thing at a time.

“This is a great opportunity and a really cool environment to be a part of. Austin and I will probably not get a chance to play in something like this again, so it’s just a matter of staying focused and enjoying the opportunity,” explained Rank.

“It’s an honour to represent Canada,” continued Connelly. “While the PGA Tour event is really an honour to play in, it’s going to be a fun week this week.”

Despite the difference in ages – Kane is 50, while Rank is 27 and Connelly is 18 – the triumvirate is all working towards the same goal.

“We played a practice round together as a team and they kicked my butt to be honest,” said Kane with a laugh. “These two have lots of experience, it’s just a little different than my 19 years on the LPGA Tour. But, we’re all here doing the same thing – representing our country – and we’re all proud to do that.”

And for Rank – who works full-time for the National Hockey League as a referee – this week is particularly special.

“It’s the pinnacle of my golf career so far,” he said.

It might be time for some of those dreams to become a reality.

The Pan Am Games golf competition gets started at 8 a.m. Thursday from Angus Glen. The full schedule can be found here.