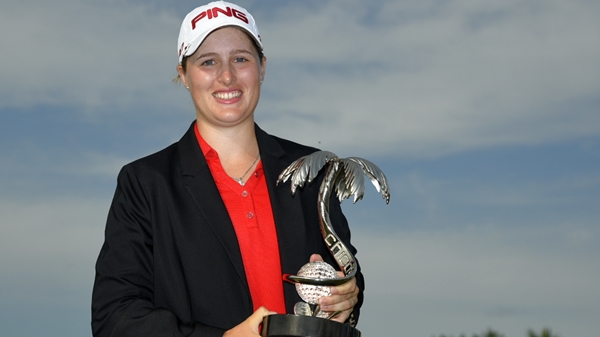 The 22-year-old James, a former North Carolina State player making her fourth start on the tour, closed with a 5-under 67 for a four-stroke victory over Laura Kueny and Brianna Do.

James, a Bath, Ont., native finished at 10-under 278 at Cypress Lake Country Club. Named Augusta after being born on the first day of the 1993 Masters, James won the Canadian Women’s Amateur last year by an impressive six shots.

With the first place check of $22,500, James moves from 58 on the Volvik Race for the Card money list to the top spot.

“It’s a fantastic feeling,” said James, who made only three bogeys over 72 holes. “I’m really happy and really excited that my hard work is paying off.”

It’s great to move to the top spot because my goal is to get one of the top 10 spots so I can play on the LPGA Tour next year,” added James. “However, I’ve been told that as soon as you start thinking about money, your golf game suffers.”

James had an incredible week off the tee. She hit 51 of 56 fairways. The flatstick was also working all week as she needed only 26 putts on the final day.

Canadians have been the story in the early part of the Symetra Tour season. Sue Kim of Langley, British Columbia won the last event in Lake Wales, Florida. Four of the top 10 and five of the top 12 on the money list are Canadians.

Maude-Aimee LeBlanc of Sherbrooke, Que., and Samantha Richdlae of Kelowna, B.C., tied for 4th at 5 under this week.

“Definitely a great Symetra Tour season for Canadians so far,” said James. “We’ve all been playing really well which is awesome and it was great to have Lorie Kane and Gail Graham from the Legends Tour here this week.”