Team Canada’s Austin Connelly is set for a whirlwind summer 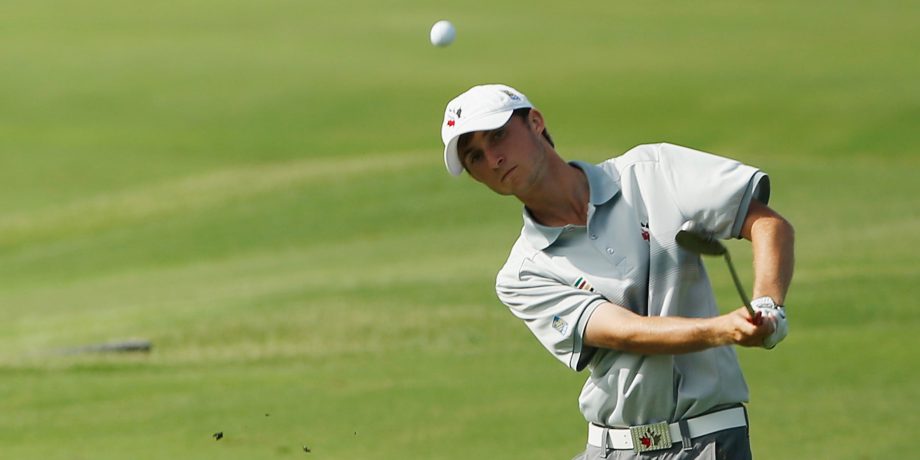 When Austin Connelly was just four years old, he visited his grandparents in Nova Scotia from his hometown in Texas. While he was there, a local news station picked up his story. Connelly was a wunderkind, having just finished third in a junior event up against kids two years older than he.

“He’d rather watch pro golf than watch cartoons,” his grandfather says in the video, as the young Connelly proceeds to knock a 30-foot putt right in the hole at Old Ashburn Golf Club.

Fast forward nearly 15 years, and Connelly is back at Ashburn. This time, he’s making his debut on the Web.com Tour, is on the cusp of becoming a professional golfer and is in the midst of realizing his childhood dream.

Connelly is in the field this week at the Nova Scotia Open on a sponsor’s exemption. He will play the first two rounds with fellow Team Canada Young Pro Squad member Taylor Pendrith after having already played in the pro-am with another teammate in Adam Svensson. The dual-citizen joined the national team earlier in 2015.

“It’s really special to come up here and play in front of my friends and family. I’ve always loved Nova Scotia because it’s a great way to escape the Texas heat,” Connelly says with a smile.

Connelly made his PGA Tour debut earlier this season at the AT&T Byron Nelson, where he made the cut and had incredible hometown support.

That support is likely going to continue at his other home this week.

“Talking to Austin, I know it means a lot to him to be here,” says Gordie Smith, the general manager of Ashburn Golf Club. “Locally, a lot of people may not yet know the name, but once they hear his story, they’ll be cheering him on.”

“If Austin gets it going a little bit, he’ll have a lot of supporters on the weekend. Nova Scotians love to cheer on one of their own,” Smith continues.

It helps that Connelly is not hard to root for.

Although small in stature – he stands about 5-foot-5 and weighs no more than 120 pounds – his game is big. And, the combination of southern charm with Canadian politeness is quite evident, after just a few minutes of talking with him.

“He’s a very nice young man,” says Smith, who also played in the pro-am with Connelly and Svensson.

His parents, too, are very committed to Connelly’s success. Bill Connelly, his father with the Canadian connection, and Bridget, his ever-smiling mother, will be alongside their son as he plays a mix of professional and amateur tournaments throughout the summer.

Connelly will also represent Canada in the Pan Am Games at Markham, Ontario’s Angus Glen in July. The 18-year-old says it will be an honour to represent the red & white.

“Any time you can represent your country, it’s really an amazing thing,” he says. “It should be an amazing experience with all the other world-class athletes. I was so happy when they sent me the invitation.”

Derek Ingram, the men’s national team head coach, will be right there with Connelly and fellow Canadian representative Garrett Rank during the Pan Am Games, even living in the athlete’s village with them.

Ingram explains that even though Connelly is a short hitter on average (and even more so when compared to someone like his playing partner Pendrith, who has been averaging north of 330 yards off the tee so far this season) his game is solid all the way around.

“He’s sneaky long when it’s not wet out. Most championships are firm and fast, so he chases it up there,” explains Ingram. “His long game – 3-wood, long-irons and the like – they’re just so strong.”

Connelly may be in tough this week, as Ashburn got hit with some hard rain leading into the tournament. However, he’s not letting anything bother him. He knows he has a job to do.

Although he is committed to the University of Arkansas, Connelly says he will pass on that opportunity for now and will go to Q-School. Only if he doesn’t get status will he end up a Razorback.

“I’m looking forward in making the next step and playing in these professional events,” he says. “I’m taking each week as they come and really trying to enjoy every second of it.”

So, this week marks the beginning of a whirlwind summer for Connelly. But it’s a journey he’s been on since he first made that television appearance all those years ago.

And maybe he’ll be on again Sunday night, lifting a trophy over his head.

The full field for the Web.com Tour’s Nova Scotia Open is available here.