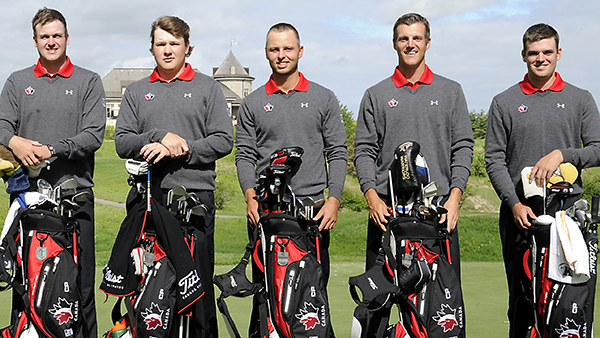 These aren’t the names of the members of the newest boy band topping the charts (although it kind of sounds like it could be). No, this band of brothers are recent products of Golf Canada’s national team program (Corey Conners is still a member) that are embarking on the next stage of their respective golf journeys together.

Adam Svensson, the 21-year-old from B.C., announced Tuesday he has turned professional. He’ll concentrate on PGA Tour Canada – and a few events on the Web.com Tour – this year. This comes after Svensson won seven times in NCAA Division II in 2014 for Barry University and he realized he was ready for the professional ranks.

Svensson joins fellow Golf Canada teammates Taylor Pendrith and Chris Hemmerich on the Canadian circuit. Pendrith, known for his long drives and deft touch around the greens will be heading to PGA Tour Canada Q-school in April, while Hemmerich, on the heels of a successful stretch in 2014, has full status on that tour.

Meanwhile, Corey Conners remains an amateur, if only for another month, so then he can participate in The Masters. He earned a spot in that field thanks to his runner-up finish at the U.S. Amateur last year.

And then there’s Garrett Rank. Rank, the elder statesman of the group, captured the 2014 Canadian Mid-Amateur Championship and will participate in this year’s RBC Canadian Open. While Rank could have continued playing golf full-time, he shifted gears and concentrated more on being a hockey referee. Most would say this was a good decision: Rank has officiated a handful of NHL games already this season.

It’s no secret Golf Canada can’t teach someone how to hit a 350-yard drive (Pendrith) or win back-to-back NCAA championships (Svensson), but the importance of their time with the program isn’t lost on the young men.

“It’s crazy to think that wherever this group of players go, there’s at least one of us near the top of the leaderboard,” says Hemmerich. “It’s pretty fun. It speaks for itself as far as the kind of program Golf Canada is running.”

Both Svensson and Pendrith are a part of Golf Canada’s new Young Pro Program. While Pendrith explains the program really helped to prepare him to make good decisions and have good habits, Svensson explains it’s a team that will help him out through the first steps of his pro career.

“It’s another support group,” he says. “I’ve known Derek (Ingram, the men’s head coach) for many years and I can call him at any time. Golf Canada has been great to me.”

Not lost on the young men are the changes that lay ahead – not so much from a golf perspective, but from the day-to-day way they must carry themselves.

“The physical side hasn’t changed. Its just golf,” says Pendrith. “But you’re not playing for (amateur) points, you’re playing for dollars. It’s a mental adjustment.”

“It’s totally different now seeing how seriously some people take it. It’s starting to sink in,” continues Hemmerich. “Every shot in pro golf means a couple hundred bucks at this level, a couple thousand bucks at the next level, and a lot more at the level after that. Every shot matters.”

Each man credits their agents for alleviating some of the pressure they’re feeling as young professionals (Conners, too). SportBox, who also manage Graham DeLaet and Mike Weir, represents Svensson. Adam Hadwin’s team at Higher Ground Sports is looking after Hemmerich. Pendrith is represented by agency in the U.S. called Empire Sports Management, and Conners has Chubby Chandler of International Sports Management in his corner.

They are alone on the golf course, but have a number of people encouraging them behind-the-scenes.

“It takes a lot of pressure of me,” Svensson says of his team. “I can call them anytime, and they’re a great bunch of dudes.”

Comments like “great bunch of dudes” and Hemmerich saying he’s “fired up” for the 2015 season quickly remind you that there’s a part of each of these men that still make them kids.

But don’t mistake their fun attitudes for lack-of-motivation. Once Conners joins Hemmerich, Pendrith and Svensson later this year as a professional, Canadian golf fans will be treated to seeing this fine crop of players in action.

And, no matter what the future has in store for them, by getting to this point, they’ve already sung the song of success.