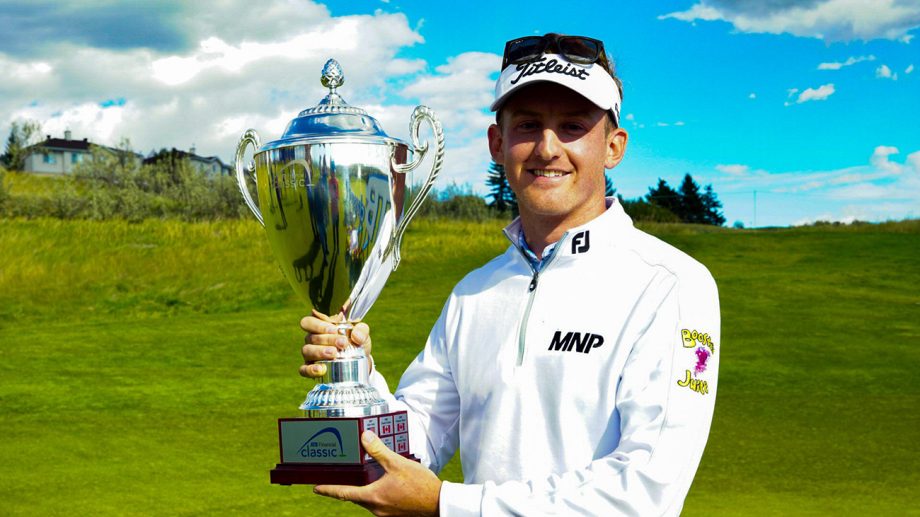 CALGARY, Alta. –  Jared du Toit came up clutch, winning the ATB Financial Classic by one shot over fellow Calgarian, Wes Heffernan. Playing in the second-to-last group of the day, du Toit collected three birdies on the back nine, including a 20-footer on No. 18, to hold off Heffernan who also made a birdie on the last.

“If you win by four or five (shots), it probably feels good, but it feels good in a different way,” said du Toit of his winning putt. “When you make a nice one, it’s a thrill for sure, and being in Calgary and having people cheer me on this week, it meant a lot for sure.”

It was du Toit’s first start on the Mackenzie Tour – PGA TOUR Canada schedule this season after struggling to a 66th-place finish on the Forme Tour.

“It’s hard to win anywhere,” said du Toit. “When you’re beating 100-plus guys at the end of the week, you have to feel pretty good about your game. For me, doing that this week, I’m feeling even more confident heading into future weeks.”

It was another tough-luck finish for Heffernan, who also finished in second place in the 2017 event. Playing in the last group of the day, he got a pretty good idea that he needed an eagle finish to force a playoff.

“We were on the 18th tee, and my caddie said, ‘We haven’t heard a roar yet,’” said Heffernan of the noise that would signify a du Toit birdie. “Then I teed my ball up, got ready to hit and all of sudden we heard the roar. At that point we knew (du Toit’s putt) was to get to 11-under.”

Despite another heartbreaking finish, Heffernan also birdied No. 18, with a big put off his own, eliciting another roar from the partisan gallery.

“When I finished second four years ago, I made a similar putt from the other direction,” said Heffernan. “So, I had some pretty good vibes over that one, and it was just one of those (putts) that went in, which was nice. A great way to finish.”

A third Calgarian, Mitchell Fox, rocketed up the leaderboard on Sunday with the round of the day. His 6-under 65, left him in a third-place tie (9-under), with Australian, Will Barnett, who now makes his home in Coquitlam, British Columbia. Sudarshan Yellamaraju rounded out the top five, finishing at 8-under.

Next year’s ATB Financial Classic will take place in Edmonton as the event rotates between the two cities.