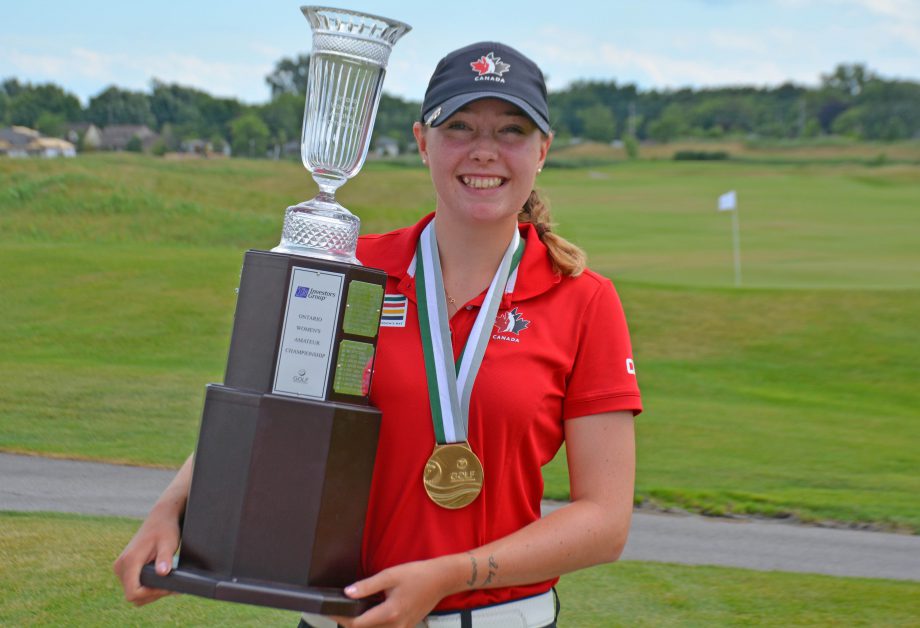 WINDSOR, Ont. — The final round of the 2016 Investors Group Ontario Women’s Amateur Championship at Ambassador Golf Club hosted a crowded leaderboard as eight players remained within five strokes of the lead. Grace St-Germain of Team Canada’s Development Squad built up a four-stroke advantage through the final day of competition to emerge victorious.

St-Germain opened with four birdies on the front nine en route to a 1-under 71 final round. The 17-year-old recorded two additional birdies on the final stretch to secure her 2-under 286 victory.

“It feels amazing to win the Ontario Women’s Amateur Championship,” said St-Germain. “To have my name on this trophy with all of these great players is fantastic!”

St-Germain’s win did not come easily, as tough weather conditions and a challenging course were taxing on the final field of 53. “My putting was the strongest part of my game this week. Getting those birdies at the end of round three gave me a lot of confidence because I wasn’t playing very well. It gave me momentum coming into today.”

Richmond Hill’s Monet Chun remained even on the day for a share of second alongside Marck-Sherk at 2-over.

As a result of their Top-3 finishes, St-Germain and Chun will represent Ontario in the inter-provincial team competition at the 2016 Canadian Women’s Amateur Championship at the Ken-Wo Golf Club in New Minas, N.S., July 26-29. With some players electing not to participate in the event, Pollock has earned the third spot on Team Ontario’s roster. The 21-year-old finished the tournament tied for seventh at 5-over.

For full tournament information, including the final leaderboard, click here.