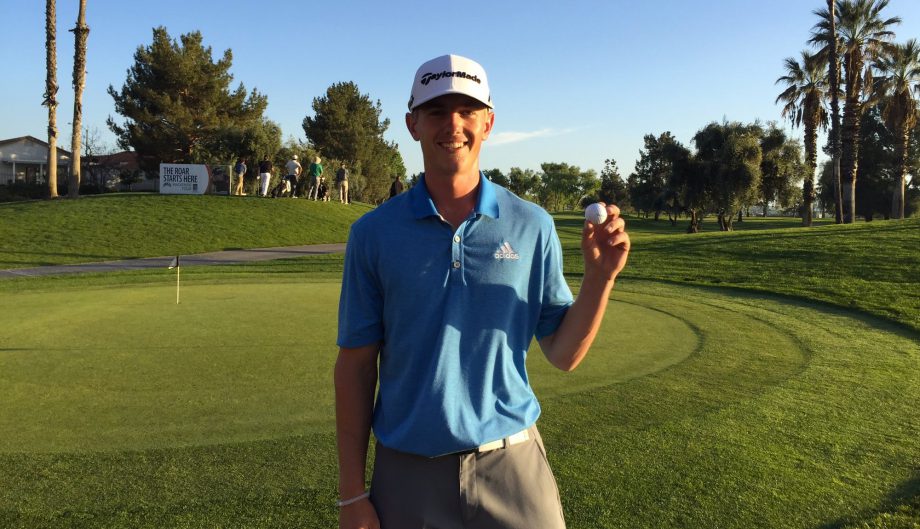 THE RECAP: Costa Mesa, California’s Jake Knapp cruised to victory on Friday at the Mackenzie Tour – PGA TOUR Canada’s USA West #2 Q-School, shooting a 3-under 68 at the Country Club at Soboba Springs to earn medallist honours and exempt status on the Mackenzie Tour in 2017.

The 22-year old finished the week seven strokes ahead of Valencia, California’s Nick Delio, taking advantage of his length off the tee and an improved wedge game to conclude the week at 16-under 268.

“I had the advantage on a lot of the holes to be able to take some of the hazards out of play, so if I knew if I could drive it straight and have a lot of shots between 100-150 yards, that would give me opportunities to make birdies,” said Knapp.

After playing his way onto the Tour mid-way through last season, Knapp made two of seven cuts and said he’s looking forward to having another chance at competing in Canada this Summer.

“Overall, getting a little redemption back,” said Knapp of his goals for the season, speaking optimistically after working on tightening his wedge game in the offseason. “My game’s changed enough now where I think it’s going to fit the courses a little bit better. It’s about being able to score a little better and ideally put myself in a position to win.”

Vancouver, British Columbia’s Stuart Macdonald was the top Canadian, closing with three straight birdies for a closing 68 and a T9 finish to earn exempt status for the first four events of the season.

FINAL SCORES FOR MACKENZIE TOUR STATUS: After 72 holes this week, every player inside the top 40 and ties earned Mackenzie Tour status for 2017. Below is a breakdown of the cut-offs for status:

“I love Winnipeg. That’s where my family’s actually from, and I get to stay with family that week and go out to Gimli and hang out with them.” – Jake Knapp, on which city and tournament (Players Cup) he’s looking forward to most in 2017.

“I really enjoyed my time on that Tour, and it’s helped me develop my game a lot. I’m really excited to get back up there and have some guaranteed starts, especially at the start of the year.” – Jake Johnson, who closed with a 6-under 65 to finish solo fifth.

“I was thinking, ‘you can do this, just stay strong.’ I was little disappointed to be in the playoff, because I was only one shot away, but everyone could find one shot to pick up somewhere, so I said ‘it’s okay, you have a chance right here.’” – Evan Bowser on prevailing in a 4-for-1 playoff to secure exempt status for the first four events.

JAKE KNAPP: Former standout at UCLA, where he recorded two individual wins and qualified for the 2015 U.S. Open. Made two of seven cuts on the Mackenzie Tour last season.

KEVIN LUCAS: Played collegiate golf at the University of Nevada-Reno and won the Money List on the 2014 eGolf Tour.

CAMERON DAVIS: Turned pro in 2016 after a standout amateur career that included individual wins at the 2015 Australian Amateur and 2016 World Amateur. Finished T15 at the PGA TOUR’s OHL Classic at Mayakoba in 2016.

CHRIS KILLMER: Former University of Washington Husky won the Players Cup in 2012 and has earned conditional status on the Web.com Tour each of the last two years.

JAMIE MARSHALL: University of Arkansas grad helped the Razorbacks to a runner-up finish at the 2009 NCAA Championship. Owns one pro win on the Adams Tour.

WYNDHAM CLARK (a): University of Oregon Senior is currently the No. 1 ranked player in Golfweek’s Men’s Collegiate Rankings on the strength of two individual wins this season.

MATT HANSEN: Two-time NCAA All-American at UC-Davis finished 66th and 67th, respectively, on the Order of Merit the last two seasons on the Mackenzie Tour.

JARED SAWADA: Played collegiate golf at the University of Hawaii at Manoa. He has played in the PGA TOUR’s Sony Open in Hawaii twice, including a T69 finish in 2017.

NAHUM MENDOZA III (a): Current San Diego State senior was named a 2nd team NCAA All-American in 2016 and represented the United States in the Palmer Cup.