Team Canada’s Maddie Szeryk charges into lead after second round of B.C. Amateur 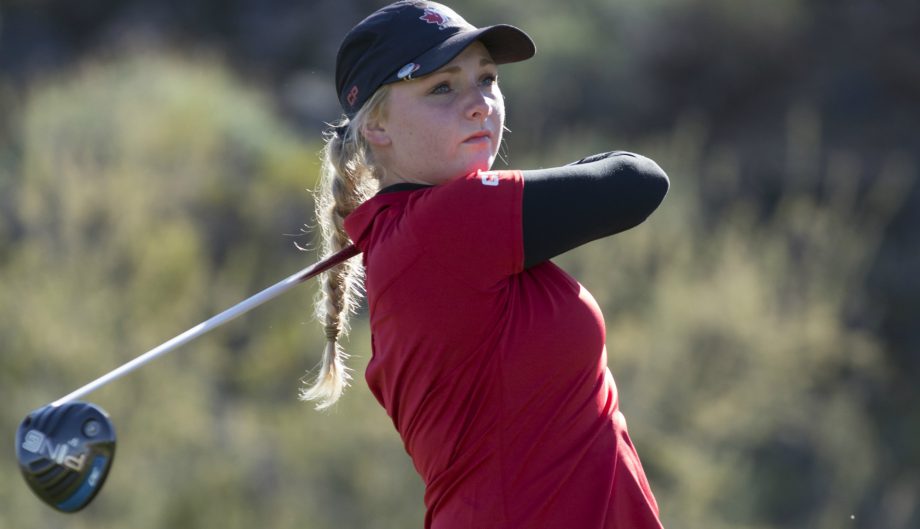 Team Canada’s Maddie Szeryk carded a bogey-free, 4-under-par 69 on Wednesday at the B.C. Women’s Amateur to move to 7 under par and take sole possession of first place through 36 holes at Vernon Golf and Country Club in Vernon, B.C.

The London, Ont., native started the day in second at 3 under par. Four birdies in round two vaulted her into first place—six shots clear of Michelle Kim (Surrey, B.C.) who is 1 under par.

Szeryk, 20, had a stellar junior year with Texas A&M en route to lowering her own season stroke average record with a 71.24 mark in 2016-17 and pouring in an Aggies’ record 128 birdies.

The three-year Team Canada member is coming off an impressive win at the Women’s Western Amateur Championship at River Forest Country Club from June 12-17.

Fellow Amateur Squad golfer Jaclyn Lee is in third at even par (72-74). The Calgary native had five top-10 finishes with Ohio State in her sophomore season helping the Buckeyes reach the match-play quarterfinals of the NCAA Division I National Championship.

Amateur Squad teammate Grace St-Germain is in fourth place at 2 over par. The Ottawa native carded a 3-under-par 70 in Wednesday’s second round.

18-hole leader Naomi Ko (Victoria, B.C) struggled in round two. The fourth-year member of the Team Canada Amateur Squad posted a 7-over-par 80 to drop into fifth place at 3 over par.

Delta, B.C., product and Development Squad rookie Mary Parsons is ninth at 8 over par after a second-round 75. Her teammate Chloe Currie (Mississauga, Ont.) is T15 at 14 over par (83-77).