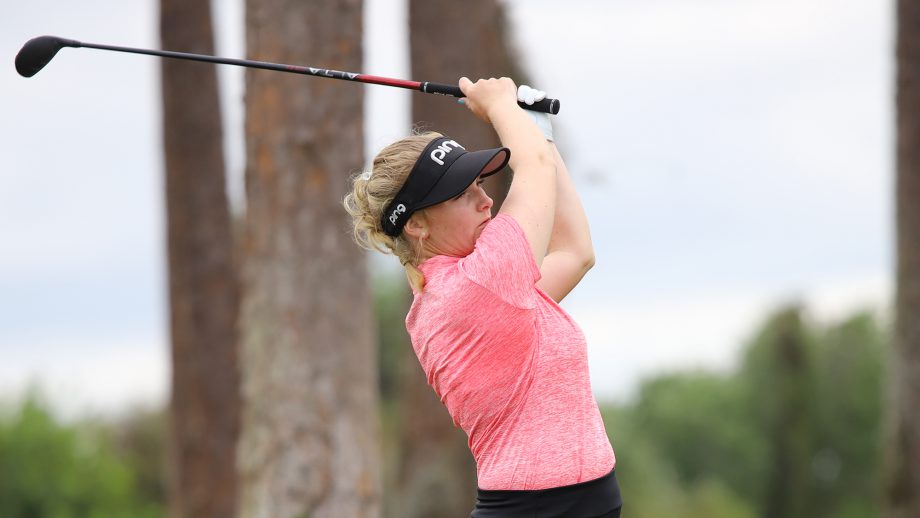 With the first 18 holes of the 2020 Symetra Tour season in the books, it is Texas A&M University alumna Maddie Szeryk (London, Ontario, Canada) alone atop the Florida’s Natural Charity Classic leaderboard courtesy of a 5-under par 67 performance.

“It was good to come out and play again,” said Szeryk, who recorded six birdies around the Country Club of Winter Haven this afternoon. “I was not putting too much pressure on myself, just going to play and whatever happens, happens. Shake off the rust a little.”

The second-year professional finished tied for 71st at the second annual LPGA Q-Series in November and then recharged the batteries. Szeryk traveled to Rosemary Beach in the Florida Panhandle with several former college teammates to “do nothing and just hang out.”

“I took most of November and part of December just completely off, needed a break and a restart,” said Szeryk.

“The first tournament of the year, you never know what to expect. I didn’t drive it super well last year, so that was a big focus for the offseason and I only missed two fairways today, was always in play.”

One shot back of the lead is three-time Symetra Tour champion Daniela Iacobelli (Melbourne, Florida), who found her way to six birdies this afternoon to sign for a 4-under par 68.

“It’s very homey to me, there’s a lot of similarities to my home course [Suntree Country Club],” Iacobelli said. “Plus, I love Bermuda and fast Bermuda. I’ve also played here since 2009, back when the Symetra Tour had a Q-School.”

Starting the season with a BANG 💥

Iacobelli has competed in this tournament at the Country Club of Winter Haven in each of the last three years. Her best finish of runner-up came a season ago while she has never finished outside the top-18 during that span. Even so, Iacobelli pointed out aspects that make her excited for a season opener other than getting off to a fast start.

“It’s cool to see it kind of come together a little bit,” said Iacobelli. “You’ve been practicing for however many weeks and kind of fighting things, or not necessarily scoring how you want to at home. The scoring out here matters. I’m just overly ecstatic to not be sitting on my couch for another week, so happy to be working.”