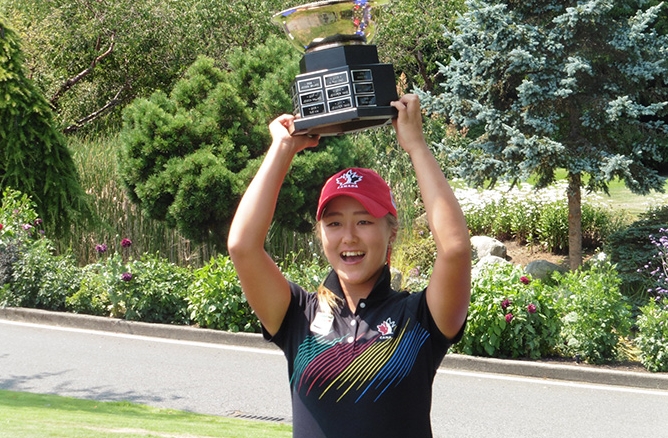 VICTORIA, B.C.  – Team Canada Development Squad member Michelle Kim may be running out of room in her trophy case.

The 17-year-old Surrey native won her second straight British Columbia Golf event with an overpowering final day at Cordova Bay Golf Course. Kim shot a (-4) round of 69 to finish at (-4) 288 to beat 12-year-old Akari Hayashi by nine strokes.

A visibly nervous Hayashi managed to hold it together to shoot a (+5) round of 78 to finish at (+5) 297 to claim solo second place and a spot on the BC team going to the Canadian Junior Girls in Saskatchewan next month.

“I still can’t believe it,” said Kim, who received her trophy from Shirley Nasheim, the 1952 winner of the BC Junior Girls title and the first winner of the trophy. “It feels amazing, especially since I won last week and I’ve played this tournament so many times.”

Kim thanked her family, including her father, who coaches her and her mother, who walks almost every hole with her. But the biggest thanks go to older sister Taylor, who Michelle beat at last week’s BC Women’s Amateur.

“Taylor gave me a really big hug before I came here and told me ‘Go get that trophy. I know you can.’ It’s the only trophy we don’t have in the house.”

For the second week in a row, Kim received a water shower from her friends Gloria Choi, Alisha Lau and Hannah Lee, who rushed the final green to spray Kim.

Kim entered the final round tied with Hayashi for the lead and after both players made nervous bogeys on the first, they also matched birdies on the par-5 second hole. But Kim gained the upper hand she would never relinquish by making another birdie on 3 while Hayashi made bogey.

When Kim made birdies at 5 and 7, and Hayashi made bogeys at 6 and 7, the lead was up to six and it was just a matter of time before Kim was lifting the BC Junior Girls trophy to go along with the Flumerfelt Cup she won last week at Duncan Meadows as the British Columbia Women’s Amateur Champion.

Hayashi made seven bogeys on the day, but saved her best for last, making birdie on the final hole as a large crowd cheered her on. “I am really happy,” said Hayashi. “This is my first time getting into the top 5 or top 10. I’m really happy.”

Hayashi was happy she finished second and got a runner-up trophy with her name on it. “I was really nervous,” she said. “There are so many good girls. I had so much pressure. . . There were so many people on the back 9, I was surprised.”