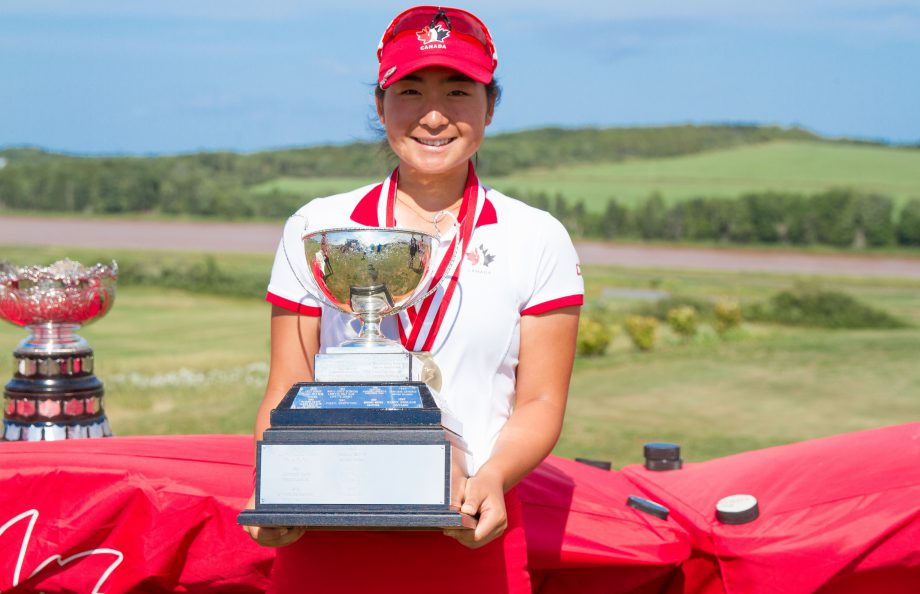 The 18-year-old entered the final round of play in a tie for first at 5-under with Mary Parsons of Delta, B.C. – only one stroke ahead of Mississauga, Ont., native Chloe Currie. Back-to-back birdies on holes 2 and 3 followed by a third on No.5 pushed the Team Canada National Squad member into an early 8-under lead.

“I got off to a really good start on the front nine,” said Ko. “The wind wasn’t really in effect but as I got to the back nine it really started picking up. I really had to adjust and learn from yesterday’s mistakes. I was striking the ball well and I think that was one of the key things today. Putting on the back nine not so good but it got the job done.”

The North Carolina State University sophomore collected three bogeys through the final stretch en route to a 5-under 283 tournament total. Ko has come close to taking the national title in previous years, but fell short in 2014 with a fourth-place finish at Thornhill Golf & Country Club in Thornhill, Ont. She was awarded second-runner-up honours in 2015 when the event was hosted by Deer Park Golf Course in Yorkton, Sask. This victory comes as a relief to Ko who was competing in her last Junior event before she becomes ineligible on the 18-and-under junior circuit.

“Knowing that it was my last Canadian junior I really wanted to win it. I tried to keep myself grounded and play it one shot at a time. I was walking up the last couple of holes and I kind of felt sick. I felt a little bit nauseous and took a deep breath and took advantage on the 18th. I had a good approach shot and knew I just had to get it in or two put, so it was a little less pressure.”

In addition to her 2016 Canadian Junior Girls title, Ko has received an exemption into the 2017 Canadian Women’s Amateur Championship hosted at Cutten Fields in Guelph, Ont., from July 25 to 28.

An impressive 73-71-68 week helped Currie slide into second place ahead of Parsons following a final round 75. The 16-year-old Development Squad member fell into a 5-over hole after carding three bogeys and double bogey through Nos. 5 to 12. Back-to-back birdies on holes 15 and 16 kept Currie in line for runner-up honours. Her 1-under 287 performance also solidified her victory in the 16-and-under Juvenile division.

Alisha Lau of Richmond, B.C., stayed even through the day to earn her place in second on the Juvenile leaderboard with a 2-over 290 final showing.

Parsons recorded six bogeys through her final round to capture third in the overall Junior standings at even-par.

The 17-year-old found victory earlier in the week after capturing the inter-provincial team competition title for British Columbia alongside Development Squad members Tiffany Kong (Vancouver) and Hannah Lee (Surrey). The trio finished the 36-hole competition with a 2-over 290 showing.

Additional information regarding the 2016 Canadian Junior Girls Championship can be found here.