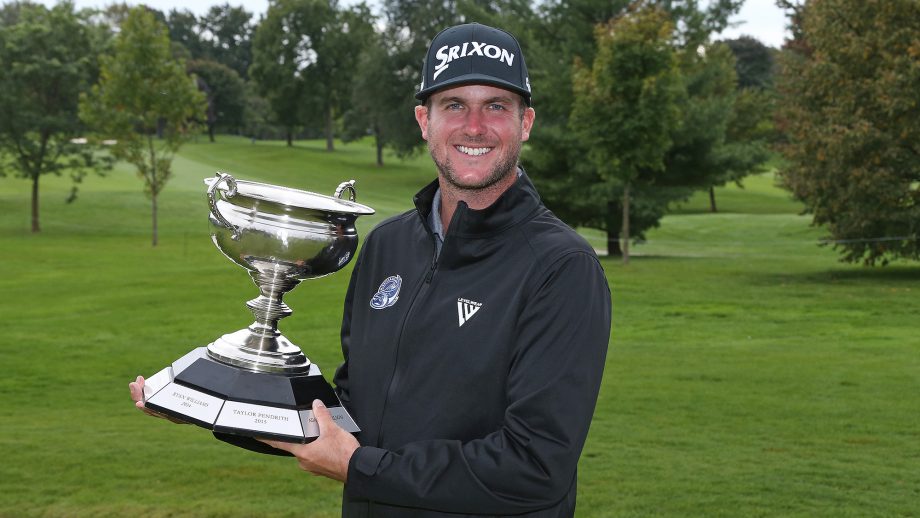 The native of Richmond Hill, Ont., came into Sunday at the Canada Life Championship with a chance to top the Order of the Merit, but after 1-under-par 69 Pendrith ended second, just $2,700 behind Paul Barjon

Pendrith won twice in 2019 – at the 1932byBateman Open and the Mackenzie Investments Open – and had seven top-10 finishes, including a tie for 10th at the Canada Life Championship en route to winning his second Dan Halldorson Trophy (he won the award in 2015, as well).

“Obviously I’ve had a great year with two wins, and I’ve been playing some really good golf,” said Pendrith. “I started off great and didn’t have the weekend I was hoping for but I was there until the end. I was grinding. The putts didn’t go in today, but overall, great year. I’m super excited to be finishing in the top five and hopefully have a great year next year.”

The 28-year-old, who was a longtime part of Golf Canada’s National Team and a graduate of Kent State University – alongside Mackenzie Tour alums and PGA TOUR winners Corey Conners and Mackenzie Hughes – will head in 2020 to the Korn Ferry Tour for the second time.

He said he now knows what to expect on the Korn Ferry Tour having played some of the courses earlier.

“I’ve learned so much about myself and my game in the past few years on the Mackenzie Tour,” said Pendrith. “It really prepares you for the next level. I’ll go in there with a different mindset and hopefully get off to a good start and continue to play well.”

The week in London was marred by a freak injury for Pendrith who woke up Tuesday morning not able to move his left shoulder. He received a few injections early in the week and played through the pain – considering how important the week was.

“Obviously, I wanted to play, but ultimately I didn’t know if I could,” Pendrith admitted. “The first two days were a big grind since I had to adjust what clubs I was hitting and the balls weren’t going very far. I was in a lot of pain, but I’ll take care of it and I earned some time off now. I’ll come back stronger.”

Earlier this year Pendrith became the first Canadian to win on the Mackenzie Tour since Adam Cornelson in 2016. Pendrith said his big goal in 2019 was to finish in the top 10 on the Order of Merit.

Although he fell just short of the No. 1 spot, he said moving on to the next level and getting the opportunities he’s afforded by finishing second is a great boost to his career.

Somewhat inspired by his friends Hughes and Conners, Pendrith is one step closer to joining them on the PGA TOUR. He’s confident heading into 2020 about the prospects of joining them sooner rather than later.

“If I play like I did this year, I should be in contention out there in some events,” said Pendrith. “It should be exciting, and I can’t wait to get going.”

Pendrith was also the Canada Life Canadian Player of the Week a record six times (he received $2,500 for each award), and he will receive a $25,000 for finishing as top Canadian for the year.

“Canada Life has been a great supporter of the Tour for the last few years, and it’s an awesome little bonus for the Canadian players who compete out here,” said Pendrith. “They give a fantastic bonus. I won it in 2015 and (am) super honoured to win it again and be the top Canadian.”