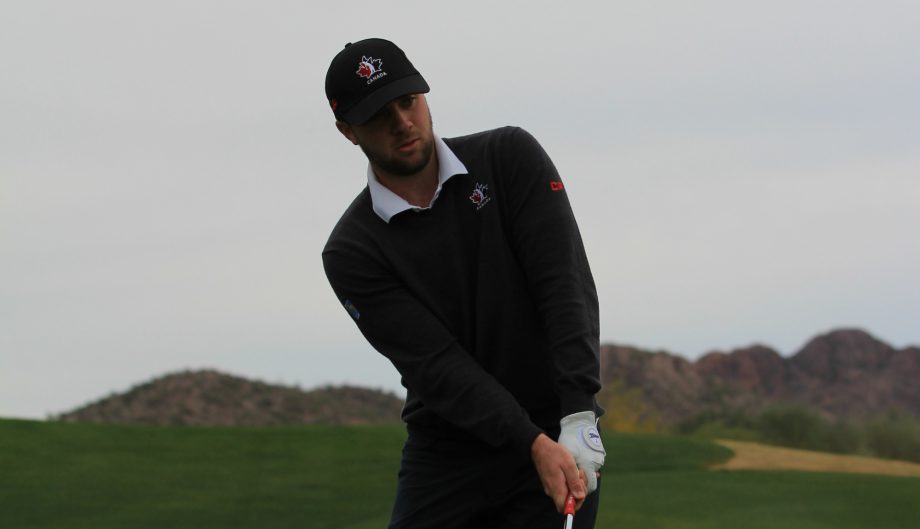 Having played numerous sports during his childhood years, Stuart Macdonald would eventually find his true passion in the game of golf.

“Growing up, I started out playing baseball, soccer, tennis, badminton, squash and basically all the racquet sports,” recalled the Vancouver native.

However, ever since his mother, Susan, introduced him to golf, he has not looked back.

“My mom was the one who got me started in golf as she was a member at the Point Grey Golf & Country Club. Golf was the last sport that I picked up; but it was the one that I stuck with,” pointed out Macdonald, a second-year member of Team Canada’s National Amateur Squad.

“I would’ve been around 12 years old when I stopped playing other sports and fully dedicated myself to golf. I just really enjoyed it and wanted to go to the golf course everyday to get better.”

Macdonald still remembers a defining victory as a teenager that opened his eyes to his potential in the sport.

“When I was 15 or 16, I won the Vancouver Open and having my name on that trophy along with names like Nick Taylor and Eugene Wong and Adam Svensson was really cool,” he recalled.

“That victory gave me the motivation to keep on playing; and it made me really strive to reach the same level as those guys.”

Macdonald says the quest for excellence on the golf course has required plenty of discipline along the way.

“You definitely had to sacrifice a part of your social life. When I was growing up – from the sixth grade until the twelfth grade – I would always turn down parties or hanging out with friends in order to work on my golf game.”

Another sacrifice made by Macdonald involved moving away from family and friends; and relocating to Florida in order to train in favourable climate conditions year round.

As he explains, the decision to relocate to Florida worked out for the best.

“I went to a school in Florida my last two years of high school and my coach there happened to know the coach at Purdue at the time; and I was able to get a walk on spot on the team. And eventually after about half a year, I earned a spot in the lineup,” he pointed out.

Macdonald—who graduated in December of 2016—recorded seven top ten finishes during his collegiate career, including a fourth place tie at the Boilermaker Invitational in his sophomore year.

Another notable highlight came in his junior year when he was named Big Ten Golfer of the Week after recording a 10th place finish at the Puerto Rico Classic.

Macdonald’s success as a Boilermaker would earn him spot on the Canadian National Amateur Squad in 2015.  Currently in his third year as part of the national team, Macdonald says he’s extremely grateful to be part of the program.

“Everyone from the coaches to the physiotherapist, sports psychologist and nutritionist that they have on staff does an unbelievable job. Being on the team has opened so many doors for me and has allowed me to play in a lot of tournaments that I wouldn’t have otherwise been able to play in,” he said.

“Those experiences have definitely been important for me to get to where I am today,” added Macdonald, who describes his game as “not long or flashy, but consistent in all aspects.”

According to national team head coach, Derek Ingram, the Vancouver golfer has made great strides.

“Stu has progressed really well.  His habits now are first class and he’s getting better and better.  He’s super coachable and a smart kid and a great teammate,” said Ingram.

Macdonald’s recent success is proving that he is a talented young golfer on the rise.

In March, the 22-year-old finished in a tie for ninth spot at the Mackenzie Tour-PGA TOUR Canada Qualifying School, and in the process, secured status for the upcoming season.

And just last month, his consistent all around game allowed him to capture the Peruvian International Amateur Championship.

“I would say that I haven’t had a lot of success at the amateur level. I’ve played well but I haven’t had many big wins and to win this event gives me a lot of confidence and obviously my family and friends were really happy for me,” said Macdonald about his recent triumph in Peru, where he won both the individual and team event.

Ingram commends Macdonald on his breakthrough victory in Peru; and predicts a bright future ahead for the young Vancouver golfer.

“Huge win for Stu; it’s his biggest so far. It’s great for his confidence and he’s starting to realize how good he is,” said Ingram.

“If he continues to play his game, he will have many more chances to win.”

Looking ahead, the ambitious 22-year-old has his sights set on competing and winning at the highest level.

“In five years, I see myself on the PGA TOUR. I know life of a pro golfer doesn’t always go as expected; but my goal in five years is to be one of the top Canadians out there and just living the dream,” he said. “I really believe I can play at that level.”

For now, the Mackenzie Tour-PGA TOUR Canada rookie is focused on his upcoming pro debut on June 1st.

And it’s only fitting that will take place where it all began more than a decade ago – at the Point Grey Golf & Country Club in Vancouver where he was first introduced to the sport by his mother.

“I’m really excited and looking forward to playing at my home course and getting my pro career started there,” said Macdonald.

“It’s where I first learned to play and where I grew my passion for the game – so it’s really sort of fitting to make my pro debut there in front of family and friends.”