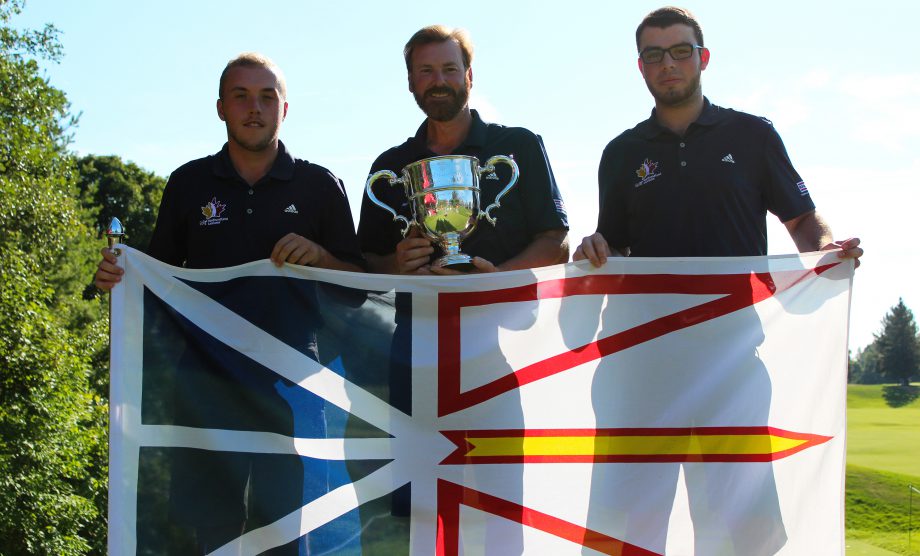 GATINEAU, Que. – The trio representing Newfoundland and Labrador made history in capturing the Willingdon Cup at the 112th playing of the Canadian Men’s Amateur Championship at The Royal Ottawa Golf Club in Gatineau, Que., and Eagle Creek Golf Club in Dunrobin, Ont. Blair Bursey maintained his standing atop the individual leaderboard and led his home province to its first national team title at any level.

“I’m really proud to be from where I’m from and to always represent my province,” said the Gander, N.L., product. “Being a little different and growing up in Newfoundland and trying to play college golf and high-level amateur golf out of Newfoundland has been difficult at times with the weather and the season, but the people back there are so good and so supportive.

“This will be a big deal back there. To win the Willingdon Cup and to do something that hasn’t been done before for Newfoundland is awesome and quite a pleasure for not only myself, but also Chuck, Nathan, our other teammates and everyone who has helped get us here.”

Nathan Peters of St. John’s, N.L., echoed his teammate’s sentiments when reflecting on the victory.

“It’s definitely something really cool. Growing up playing golf in Newfoundland, you only ever really expect to just play in nationals and winning anything is very far-fetched. The golf courses were extremely beautiful and winning the Willingdon Cup is pretty incredible.”

Alongside fellow St. John’s native Chuck Conley – who was forced to withdraw prior to the second round due to injury – the trio finished the competition a combined 3-under 281 to earn the province’s first Willingdon Cup in the team competition’s 89-year history. The victory also gives the Atlantic province its first team title at any amateur level on either the men’s or women’s sides. Bursey was quick to credit his teammates when asked about the historic feat.

“I know Nathan quite well, he’s a super talented kid. I don’t think he knows how talented he is. Chuck is as awesome as ever – a real nice guy and always fun to play with. So they’re really good guys and I’m really happy for them.”

“Hanging out with guys from home is always good,” the Utah Valley University Wolverine added. “I don’t get to be home very often with school and all that kind of stuff, so to be around people that give me that home-sort-of-feeling is always good. I love playing golf with them and it’s always a great time being around them.”

Team Ontario finished two strokes back of the champions, while Teams Alberta and Quebec claimed third at even-par 284.

Bursey continues to lead the individual competition following a 1-under 69 to reach 9-under in the competition. The 19-year-old collected three birdies on the day, including two back-to-back on Nos. 6 and 7. Despite already leading Newfoundland and Labrador to unprecedented success at this championship, he remains confident and focused on the task at hand.

“I’ve been a winner at other levels. Junior golf and college…amateur golf is the next step. I feel like I’m in a good place in my development where my game is starting to be at a place where it’s ready to win some bigger tournaments.

“That’s not to say I’m going to go ahead and win this week, but it’s all a learning experience. I’ve never made the cut at this tournament before, so it’s a new experience at a top-level amateur tournament. I’m not afraid of it at all. That’s why I practice and this is why I play the game. I love the feeling of being near the top and certainly being at the top. I’m definitely looking forward to the next couple of days.”

China’s Andy Zhang, a resident of Winter Garden, Fla., shot 2-under and trails the leader by two strokes. Team Canada National Amateur Squad member Hugo Bernard from Mont-Saint-Hilaire, Que., collected seven birdies, including four across a bogey-free back nine, en route to the day’s low round – a 6-under 64 showing. Bernard, who finished tied for runner-up honours in the 2015 edition of this championship, moved into a share of third at 5-under alongside Chris Crisologo of Richmond, B.C.

Three players sit T5 fifth at 3-under – National Team member Stuart MacDonald of Vancouver, Travis Smyth of Shellharbour, Australia, who is No. 62 on the World Amateur Golf Ranking and Elmira, Ont., native Garrett Rank who claimed a share of second last year.

A total of 77 players who finished 5-over 147-or-better have advanced to the final two rounds of the Canadian Men’s Amateur Championship to be contested at The Royal Ottawa Golf Club.

In addition to claiming the title of 2016 Canadian Men’s Amateur champion, the winner will earn exemptions into the 2016 U.S. Amateur at Oakland Hills Country Club in Bloomfield Hills, Mich., and the 2017 RBC Canadian Open at Glen Abbey Golf Club in Oakville, Ont. The champion will also be eligible to receive an exemption into the U.S. Junior Amateur, the U.S. Mid-Amateur or the U.S. Senior Amateur, if applicable.