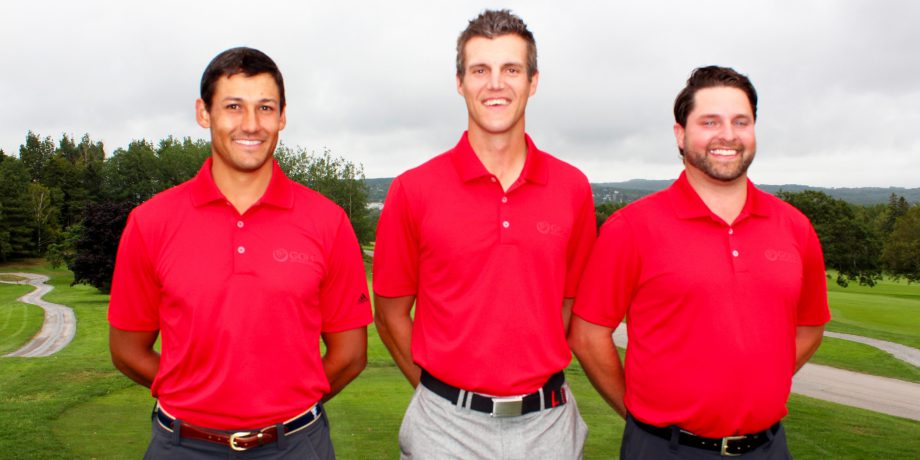 Team Ontario captured the R. Bruce Forbes Trophy as provincial team champions at the 2015 edition of the Canadian Men’s Mid-Amateur Championship. The three-man unit combined for a total of 5-over 285 at Abercrombie Country Club in New Glasgow, N.S.

“When you make the team, the goal is to come here and win,” said team member Garrett Rank. “It’s really nice for me and the guys to bring it back home to Ontario.”

Rank, the competition’s defending champion, reflected on his time together with teammates Kevin Fawcett of Toronto and Josh Hunke from New Hamburg, Ont., as a building block to their victory. “I played with them in the final round at the (Golf Association of Ontario’s Investors Group Men’s) Mid-Amateur so I knew them pretty well. I grew up with Josh’s brother, so I knew his family a little bit better, too. (Kevin and Josh) are nice guys and good players.”

For the past 23 years, provincial teams at the Canadian Men’s Mid-Amateur Championship have contested the R. Bruce Forbes Trophy – awarded to the provincial team with the combined two lowest daily scores through each of the first two rounds of competition.

Finishing in second was the team representing the host province, made up of Dartmouth native Stuart Lenehan, Biblehill product Paul Coulson and Glenn Robinson of Middle Sackville that tallied 8-over 288. In third place with a combined effort of 12-over 292 was another maritime province – Team New Brunswick, comprised of Brett Taylor (Grand Bay-Westfield), Michel Landry (Saint John) and Greg Jones (Berry Mills).

Despite gusty conditions, Rank carded a 3-over 73 to maintain his lead in the individual competition. The 27-year-old’s round was highlighted by three straight birdies on holes 11 to 13.

“It was harder out there today in the wind,” reflected the native of Elmira, Ont. “I made a few mistakes and they cost me a couple of double (bogeys), but I putted really well. It wasn’t a good day, but I managed well out there.”

When asked about his mindset heading into the third round, the former Waterloo Warrior said, “I need to stay patient and give myself more looks. I didn’t give myself too many opportunities today. It seemed like I was working for par a lot more than I was yesterday.”

Kevin Carrigan and Glenn Robinson are knotted for second following identical rounds of 72 and 69. Carrigan from Victoria, B.C., opened with two bogeys on his first nine holes, but recovered with three birdies across the remainder of his round.  Likewise, Robinson began the day with a 2-over 38 on the front nine before registering three birdies, including two back-to-back on holes 14 and 15, to complete the day.

With today’s 69, Robinson also took over top spot in the over-40 Mid-Master division. First-round leader Garth Collings of Matlock, Man., moved to second place following a round of 73 that including four birdies. Tied for third with two-day totals of 144 are Allan Stanley of Windsor, Ont., and fellow Ontarian Dave Bunker of Woodbridge.

In addition to claiming the President’s Cup, the winner of the 29th playing of the Canadian Men’s Mid-Amateur Championship will earn a coveted exemption into the 2016 RBC Canadian Open to be played at Glen Abbey Golf Club in Oakville, Ont.

Advancing to the third round are 78 players who shot 15-over 155 or better. Additional information regarding the tournament can be found here.