Teeing up the Summer Youth Olympics 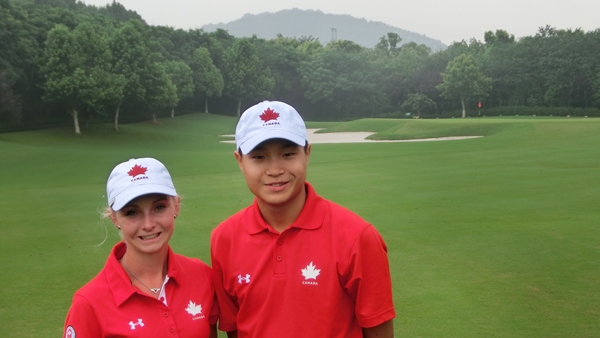 NANJING, China – Canada’s Tony Gil and Maddie Szeryk are set to tee off in Tuesday’s opening round of the Summer Youth Olympics at the Zhongshan International Golf Club.

The event marks the debut of golf at the Youth Olympics, coinciding with the sport being voted back into the 2016 Rio Olympic Games.

Both Szeryk and Gil were in attendance for remarkable the opening ceremonies, which saw over 4,000 performers light up the Nanjing Olympic Arena for a crowd of over 62,000. The stunning ceremony paid tribute to the great history of Nanjing, China, and its many icons and landmarks.

The practice round took place on Monday in the very hot, humid conditions at Zhongshan. The course is in great shape, especially noticeable in the undulation of the greens. With wide fairways, the long-hitting players will have a slight advantage.

Team Canada’s Lead Development Squad Coach, Robert Ratcliffe, is in attendance with the players to help prepare for the week and all the festivities.

“Preparation has been centered around keeping the ball below the hole on approach shots,” said Ratcliffe of the team strategy. “Both Tony and Maddie are striking the ball well and they look confident heading into tomorrow’s opening round.”

Gil, a first-year member of Team Canada’s Development Squad, is planning to maintain focus on a difficult course in difficult conditions.

“My key will be staying hydrated and avoiding any mental errors by focusing on my pre-shot routine,” said the Vaughan, Ont. native.

Meanwhile, Szeryk, a dual citizen of Canada and the U.S., is hoping to stay calm under the pressure of an event of such large magnitude.

“I need to focus on maintaining a calm approach to every shot by capitalizing on my breathing techniques,” said the 2013 Canadian Junior Girls Champion. “Hitting greens will be important, so my main focus will be putting the ball in the right place off the tee.”

The boys and girls divisions will each play in three stroke play rounds, ending on Thursday. The three days of team competition will follow starting on Sunday.