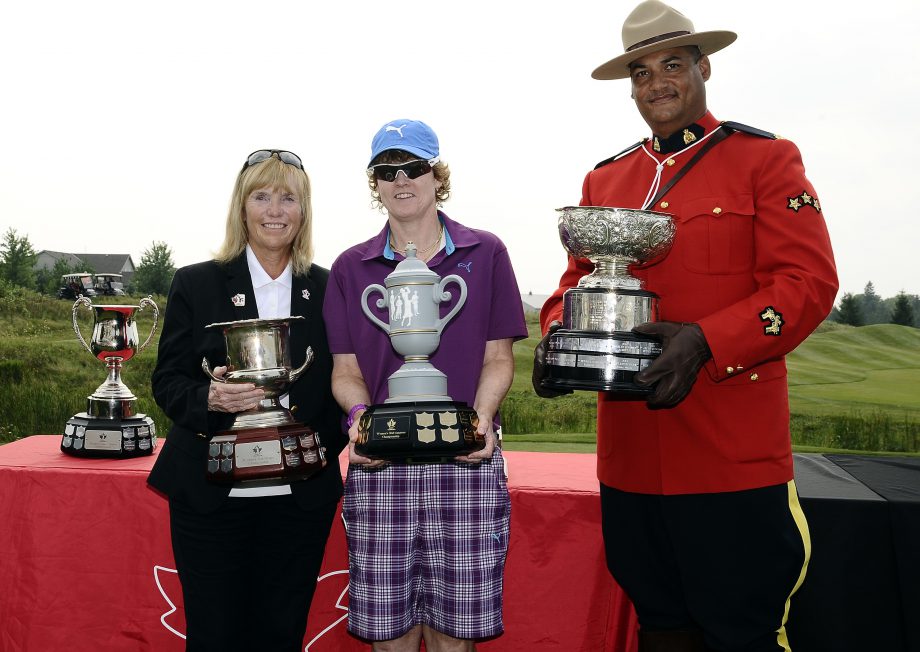 CAMLACHIE, Ont. – It came down to the wire at the 2015 Canadian Women’s Mid-Amateur and Senior Championship as Terrill Samuel of Etobicoke, Ont., captured a trio of titles at Sawmill Creek Golf Resort and Spa.

“It feels great. It was a wonderful tournament and I had a great time. It’s very exciting to win the Championship,” said Samuel, who also won the 2012 Canadian Senior Championship. “I think it really helps that you’ve done it before because you can believe in yourself. But it also relaxes you because you have won and you’re not trying to do your first.”

The Weston Golf and Country Club member entered the final round tied with Judith Kyrinis of Thornhill, Ont., and edged the competition with a 1-over par final round. Samuel opened the tournament with a 3-under 68 followed by a 70 on day two.

“I played with Judith Kyrinis for three days and she played absolutely flawlessly. She barely missed a shot and every time I would hit a bad shot, it seemed I had a horseshoe and had a good break,” said Samuel, who was in a draw with Kyrinis heading into the final hole. “I actually didn’t feel good at first because I thought she probably deserved to win the tournament as opposed to myself, but I guess it’s good to be lucky sometimes.”

Kyrinis shot a final round 74 to finish two strokes behind to finish runner-up. The 51-year-old matched Samuel round-for-round, but shot a double-bogey on the 18th hole to finish second in the Mid-Amateur, Mid-Master and Senior divisions.

Mary Ann Hayward of Aurora, Ont., rounded out the top three in all three divisions after posting 2-over par for the tournament. The Canadian Golf Hall of famer, who has three Canadian Women’s Senior titles, rebounded from a 4-over par front nine during the final round with an eagle-birdie-par to finish 1-over for the final round.

With the victory, Samuel gains entry into the 2015 U.S. Senior Women’s Amateur at Hillwood Country Club in Nashville, Tenn., from September 26 to October 1.

“That was the best part really, it was great to get that exemption,” said Samuel who was headed to a qualifier for the U.S.G.A event next week.

The Inter-Provincial Team and Super Senior divisions that were played concurrently with the first two rounds of play were awarded on Thursday and saw Team Ontario alongside Joey Bush emerge victorious.

The host provincial team finished the two-round championship at 3-under par and was comprised of Hayward, Uxbridge, Ont., native Gail Pimm and Debbie Court of Mississauga, Ont.

In the Super Senior division, Bush, 64, of Aurora, Ont., captured the over-60 Super Senior Championship title after finishing 11-over par through the opening 36 holes.

Additional information regarding the 2015 Canadian Women’s Mid-Amateur and Senior Championship is available here.