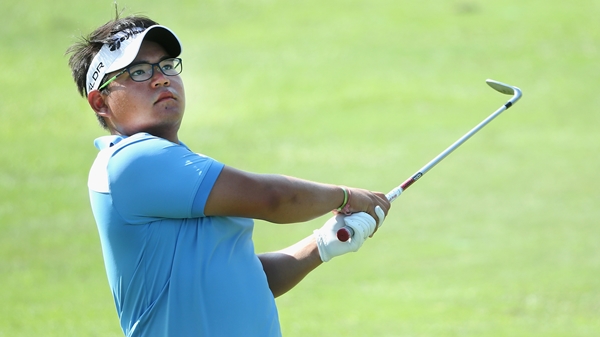 SINGAPORE – Panuphol Pittayarat of Thailand birdied two of his last three holes to maintain a one-stroke lead after the second round of The Championship at Laguna National on Friday.

Panuphol, the overnight leader, shot a 4-under 68 for a two-round total of 13-under 131, a stroke ahead of Scott Hend of Australia, David Lipsky of the United States, and Felipe Aguilar of Chile in a tie for second place.

The Thai, ranked 451st in the world, has never won on the European Tour and missed his last three cuts this year on the Asian Tour.

“The two birdies in my last three holes were nice to end off my round,” he said. “It’s nice to be putting myself in a good position heading into the last two rounds. I would rather stay up there than to be chasing the lead actually. I just want to grab my chance and not let it go.”

Hend had eight birdies and just one bogey to shoot a 7-under 65, the low round of the day.

The Australian, who’s also looking for his first European Tour title, said it was difficult to stay focused in the hot, humid conditions at Singapore’s Laguna National golf course.

“I am used to this kind of weather but it still comes to a point where your body just cannot take it and it makes you lose concentration,” he said. “I’m managing well so far. Two more rounds to go and we will see what happens.”

Aguilar, playing with a sore wrist after a recent mountain biking accident, birdied his last three holes to card a 67.

“(The wrist) doesn’t bother me much, but I still have pain. It will be there for the next four or five months,” he said. “Everything you do is dangerous so you have to be careful, but I’m playing good golf because I’m happy, and so the mountain biking helps.”

Anders Hansen is also returning from a wrist injury that required surgery and kept him off the tour for six months last year. He missed the cut at his first two events this year, but finished in a tie for fifth last week at the China Open.

The Danish golfer shot a 66 on Friday to move into a share of fifth place at 11 under, two strokes off the pace. He dropped a stroke on his final hole when he three-putted for bogey.

“It’s always hard coming back after an injury,” he said. “I’ve never had six months off before so I didn’t know what to expect. It was tough the first four rounds I played, the first two in Spain and Malaysia, but then last week something kicked in and it has carried on this week.”

Canada’s Richard T. Lee is sitting at 1-over par 144 thru two rounds.