Golf is a rivalry for the Bean family 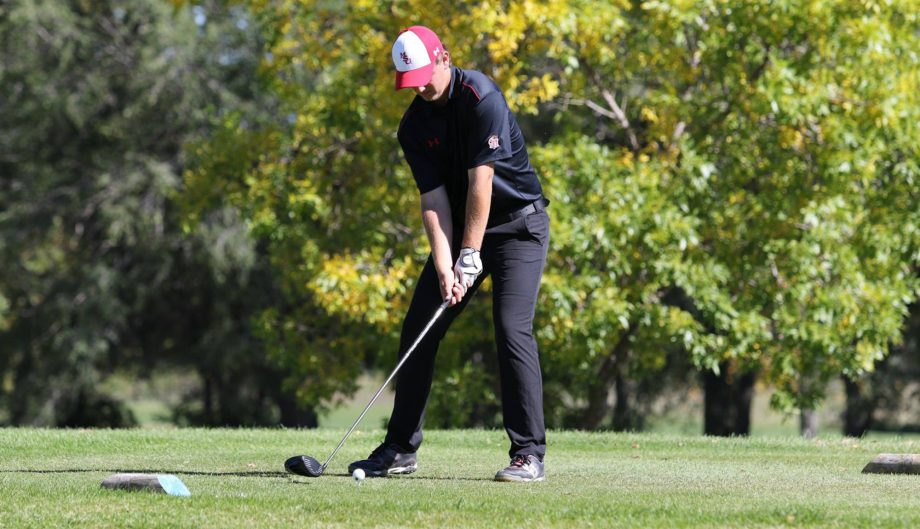 Sure, Jordan Bean would love to brag that he consistently bombs drives past his older brother, Matt.

He doesn’t though. Not many do.

“He likes to rip at the golf ball,” said 16-year-old Jordan of Matt, two years his senior. “Even now, I’m not as far as him and I probably won’t ever hit it as far as him. Growing up, he was outdriving everybody in his own age group.

“But it was good to be able to throw the chirps out if I ever did outdrive him.”

Golf is a gentleman’s game, but the occasional barb and wisecrack is, uh, par for the course in this case of sibling rivalry.

Matt and Jordan are regulars at Canmore Golf and Curling Club, a charming and community-minded hangout in the Canadian Rockies, just a few minutes from the entrance gates to Banff National Park.

But every course has its own set of Bean brothers (or sisters), siblings who never seem to tire of cranking shots on the range and stick together like the Velcro flap on a golf glove.

“If I’m going to practise, I’ll definitely ask him what he’s doing and sometimes I’ll even call him if he’s out and say, ‘Hey, I’m going to practise’ or ‘I’m going to play. Do you want to come?’” Matt said. “And he’ll always say, ‘Yeah, pick me up,’ basically wherever he is. It’s generally something that we do together.”

Puck was their early passion, but the Beans got hooked on birdie-hunting together, with both crediting Jason Schneider’s junior program at Wildwood Golf Course in Saskatoon for sparking an increased interest in tournament play.

In fact, when the family moved back to the mountain town of Canmore after five years on the prairies, Matt stuck with Schneider — still an assistant professional at Wildwood — as his coach.

The brothers improved together, too.

“They were extremely hard-working, extremely dedicated. They spent a lot of hours here,” Schneider recalled. “They always strived to be better, and they always wanted to have that belt at home.”
That’s a boxing analogy, and these matches have become slugfests.

Today, Matt’s handicap factor is +1.5. He just completed his freshman season with the men’s golf program at Minot State University in North Dakota.

Jordan, a lefty who will graduate from high school in 2018 and also hopes to tee it up at the post-secondary level, is a scratch, and he gets one or two strokes off big bro.

“We’ll go on family golf holidays, too, and that’s an opportunity for all four of us to get out and golf together,” said their proud father, Martin Bean. “Usually, (wife) Barb and I are in one golf cart and the boys in the other, because they’re playing from the same tees and we’re a little bit further forward.”

There are not many sports that can bring a family of four together in that fashion.

“We didn’t really get to play hockey together, and it was always one of us being at the rink at this time and the other being at the rink at another time,” Matt said. “So we definitely got a lot closer when we started playing 36 holes a day in the summer and you spend eight hours on the course together. It seemed like there was always something to talk about, because you get your breaks from talking when you’re hitting your shots. So it’s definitely helped bring us together.”

Echoed Jordan: “We strive off each other, to try to beat each other. And I think it’s made us way better golfers than we probably could have been alone.”

Let’s not forget though, these kids can play. Matt finished in a tie for second last summer at the Alberta Junior Boys Championship,

crafting a three-round tally of two-over 215 in crummy conditions at the weather-shortened showdown.

Jordan closed with a red number — a one-under 70 on what turned out to be the last day — and wasn’t many notches down the leaderboard, T16 at 11-over 224. He checked in fifth among juvenile-aged competitors that week.

If one Bean has signed his scorecard and the other is still on the course in a tournament lap, they’ll often loop back with buddies to offer encouragement. It’s telling that one of Jordan’s favourite golf memories is a match that he lost, and not to his big bro.

“We were playing in a match-play tournament in Waskesiu and were paired up together, but we weren’t playing each other,” Jordan said. “I was dormie on No. 18 and knew I wasn’t going to win after I hit my drive a million miles off to the side. Matt was trying to come back in his match. If he lost, I would have to play him the next day, so I was cheering for him to come back, I’ll tell you that much.

“He managed to win by winning the last four straight, and it was one of my favourite moments to watch him play. It was just fun to cheer him on and see him succeed in that tournament aspect. “That’s one that I remember the most.”

Without a doubt, there will be many more memories. Realizing the PGA Tour is “far-fetched,” Matt will major in elementary education, a background that will also come in handy if he pursues a career as a teaching pro.

Jordan has time to ponder his options, but he’s leaning toward business or engineering.

“And being an elementary school teacher,” Matt pointed out, “I’d have my summers off to play golf.”

As long as Jordan lives nearby, he’ll never have trouble finding a game.

“I guess the rounds have become a little bit more serious. We tend to be a bit more focused than we were when we were little,” Jordan said. “But even then, it’s very similar to when we were smaller. We play for a milkshake or something now. But honestly, it’s just us two kids going to the course and having fun and playing together.”