The price of fun 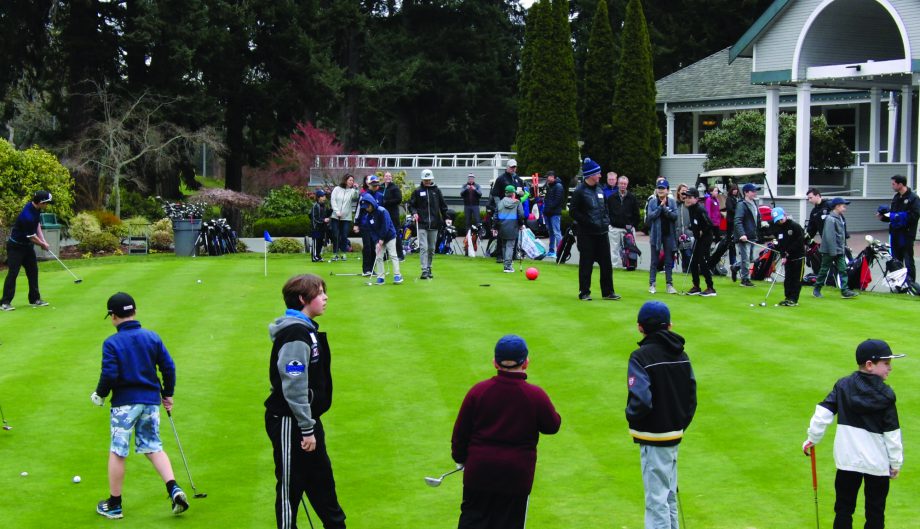 Registering your kids in athletic activities can be a costly endeavour. But for the hours of engagement offered, golf may provide more value than you think.

As a child, Carrigan would spend hours at Cedar Hill Golf Course in Saanich, B.C., on Vancouver Island before becoming a junior member at the prestigious Royal Colwood Golf Club in Victoria.

“In the summertime, mom and dad would drop us off on their way to work and they would have to peel us out of there when the golf course was closing and they wanted to go to bed,” chuckles Carrigan, a financial planner with Investors Group. “It’s such a social sport, especially when there’s a group of juniors growing up together.

“The bigger group you have the more you learn, it seems. There are very few places, at 12 years old, where you’re able to go with three other 12-year-olds with no group signing off on it, no chaperons, no anything.”

All the hours Carrigan devoted to practising paid off, earning him a university education at Midland College and then the University of Texas-Arlington, four top 10s in the Canadian Men’s Amateur Championship and two trips to the PGA Tour’s RBC Canadian Open as the Mid-Am winner. He feels compelled to now return the favour through his roles as Junior Chair at Royal Colwood and as co-chair with the British Columbia Golf’s Zone 5 Juniors.

“I received so many life values out of being at the golf course, starting with conducting yourself in a public environment, knowing that everyone is always watching you, and then learning an ability to adapt and relate to others who I had nothing in common with,” he reflects. “You’re 12 and they pair you with an 85-year-old for five hours. They’re not your grandparents, so they don’t have to love you. You have to get to know them and it’s been invaluable for my development as a person, beyond the golf course.”

All at a minimal cost, he might add. Sure, memberships have increased since the days when the 30-year-old used to tour around Cedar Hill and Royal Colwood in his youth, but the access and engagement children receive still compares well to other sports.

“This is something that I’m passionate about, the value of golf when we look at the cost of other sports,” says Jason Giesbrecht, director of golf at Royal Colwood. “I have three kids myself who have gone through soccer and lacrosse and other sports and when you look at the opportunity kids have at a facility like Royal Colwood, where we have 167 acres of open greenspace for kids to run around in and access to practice facilities, it’s invaluable.”

For less than $700 a year, juniors related to adult members can have the facility at their fingertips. That includes organized programming, lessons, tournaments and the ability to play anytime after 2 p.m. Consider a standard round lasts four hours and that can easily amount to 20 hours per week in the summer if that’s how eager the junior is, learning both athletic and life skills while parents are at work.

“For our junior members, in the summer months, this is their home away from home,” Giesbrecht adds of Royal Colwood, which held a Kids Day in March to introduce children from the Island to the sport. “We’ve had great stories of the success of juniors playing competitive golf, but the successes we don’t necessarily hear about are the kids who got to meet a bunch of great people, grow socially and are active.”

The certified PGA of Canada professional also emphasizes the physical activity and fitness golf offers, with no threat of concussions or broken bones either. That added safety in the activity makes his private club’s $57-per-month fee well worth it in his mind.

That cost is higher than most public facilities, which is where a high percentage of juniors are first introduced to the game right across the country.

The City of Edmonton, for example, sells full access junior memberships with unlimited play for $125 at Rundle Golf Course, an 18-hole par-3 track in the city’s east end. Or for $425 you can receive unlimited play at all three city-run venues — Victoria, Riverside and Rundle. There are no time restrictions at Rundle and rounds can be played at Victoria or Riverside anytime from Monday to Friday and after 3 p.m. on weekends and holidays, which still provides plenty of flexibility for other family activities.

Smaller commitments with the city begin at $75 for 90 holes at Rundle specifically, or $200 for 180 holes at any of the three facilities.

In comparison, to register kids for soccer in south Edmonton, parents can pay anywhere from $110 to $275 from the ages of under four to under 18 for one or two games a week, which would total no more than three hours of activity time.

South Jasper Place minor baseball, also in Edmonton, costs $110 for children four to five years of age and increases to $300 for midget-aged players at the house-league level, which usually entails just a few hours per week. It pales in comparison to the minimum four hours per round on the golf course. Meanwhile, rep baseball fees at South Jasper Place jump drastically from $650 to $1,050 for mosquito-AAA to midget-AAA levels, respectively, as travel and tournament costs kick in.

The junior program at Royal Colwood GC consistently delivers great instruction. It prides itself on being inclusive and engaging, no matter the age groups or weather forecast.

“There are so many things that kids can learn from the game of golf; that’s why we say it’s such a fantastic game for them to take up. There is a lot that they learn from it, especially because it’s them individually,” explains Adam Werbicki, an associate pro who directs one of 32 recognized National Golf Development Centres in the country at The Derrick Golf and Winter Club in southwest Edmonton.

“No one else is hitting the shot for them and the successes they achieve comes from them. It challenges structurally and they persevere at their own rate. Kids are like little sponges, so if they’re engaged in it, they’re having fun. It’s amazing how much they can learn and how fast they can learn it,” adds Werbicki, who is in his 11th season at The Derrick, while also highlighting the life skills such as
respect and patience that golf teaches.

On the other side of the country, a junior membership at Green Gables Golf Club in Cavendish, P.E.I., (which allows for playing privileges at the course along with sister spots, Andersons Creek and Forest Hills, nearby) is tabbed at $395 for the season and jumps to $525 for post-secondary students with a valid identification.

In contrast, it’s a bit pricier than soccer registration for the Sherwood-Parkdale Rangers in P.E.I., which begins at $105 for under five and jumps to $135 for under 17s, but that doesn’t account for actual time on field.

In Canada’s largest urban centre, Toronto, a season-long junior membership for $300 unlocks access to each of the city’s five public facilities. It’s targeted at kids between ages 10 and 18 and is tax included. Tee off times after 11 a.m. from Monday to Thursday and after noon from Friday to Sunday when accompanied by a paying adult are the only two restrictions that apply.

“It’s also a game where parents can play alongside their children for a lifetime,” states Giesbrecht, who has had the likes of Carrigan, National Amateur player Naomi Ko (who competed in three LPGA events last year) and Nolan Thoroughgood, a 15-year-old who became the youngest ever to win a B.C. Men’s Amateur Championship in 2016, work through the Royal Colwood junior program. “There are not many sports where you can say that and that is something that is valuable to golf as well.”

“Literally it’s the least expensive babysitting you could have,” laughs Carrigan, who vividly recalls his early days at Cedar Hill, which also produced touring professionals Jim Rutledge and Rick Gibson.

When he wasn’t playing with his parents, he admits hanging around other senior players and that soaking up some of their experience, as players and gentlemen, contributed immensely to his development.

“The golf course is all about telling stories,” Carrigan says. “It’s helped me mould myself into the type of person I wanted to become.”

And that’s exactly what Golf Canada hopes to instill with the Long-Term Player Development plan that comprehensively aligns junior programming coast to coast.

“We’re still in the early stages of being able to measure how effective some of Golf Canada’s junior initiatives are having on participation,” details Jeff Thompson, Golf Canada’s chief sport officer and interim CEO, referring to the Golf in Schools program developed in 2009 that exposes the sport to hundreds of thousands of youngsters at more than 3,100 institutions across the country.

“We want kids to go home and say, ‘Mom and dad, I played golf today. I really loved it, can we go try it?’ To have that start to translate into more kids participating in clinics and camps at facilities; having families become members and getting up the chain to kids participating in competitive programs is important.

“Other sports, like basketball or volleyball, all get introduced at schools and when parents start making decisions of where they register say Jimmy or Sally, it’s usually a sport where they’ve had some exposure. So we felt it was important to get golf into schools.”

The popular belief that golf can become more costly, depending on equipment selections, isn’t inaccurate. But it doesn’t approach where elite hockey has ventured. Some skaters, from 16 to 20 years of age, are now paying upwards of $3,000 to play Junior A, or even Junior B, in hopes of attracting college scholarships.

“There’s a perception that (golf) is expensive but if you’re looking for participation there are opportunities to get reasonably priced value, be it junior memberships or summer camps,” insists Thompson. “It’s very competitive with other sports.

“It’s a great social activity and they learn some great skills like honesty, calling the rules on yourself and the integrity of the game.”

How much that’s worth is for parents to decide.