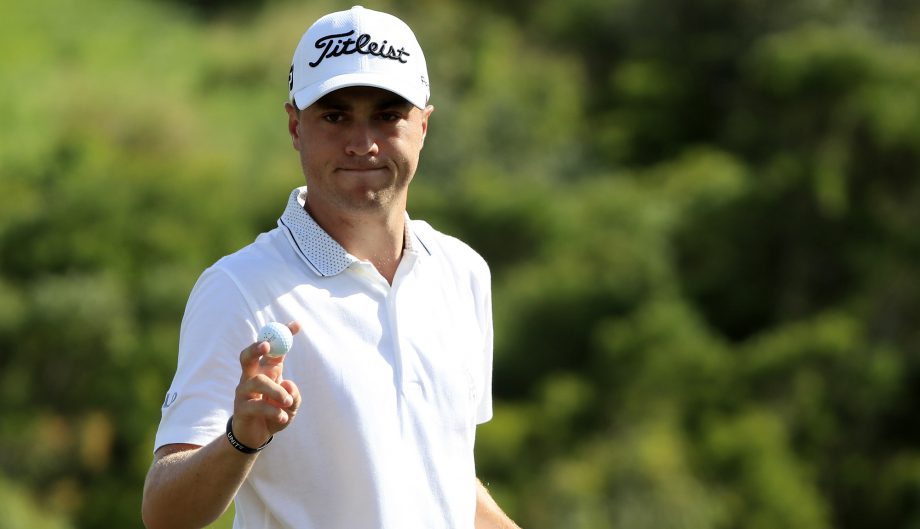 KAPALUA, Hawaii – With one powerful swing, Justin Thomas drove the 14th green and made eagle to take control Saturday in the SBS Tournament of Champions.

Thomas holed the 20-foot eagle putt and closed with a two-putt birdie from just short of the green on the par-5 18th for a third straight round of 6-under 67, giving him a two-shot lead over Hideki Matsuyama of Japan.

Matsuyama, who had eight birdies in his round of 66, has won four of his last five tournaments worldwide dating to Oct. 16 at the Japan Open. The only player to beat him during that amazing stretch was Thomas at the CIMB Classic at Malaysia.

This time, they will be in the final group at Kapalua.

Thomas was at 18-under 201, and while he was pleased with his score and the lead, he had a chance to build even more separation. Following his eagle on the 14th, he smashed another drive that caught the slope on the par-5 15th and rolled to the bottom of the hill, a 348-yard drive that left him only 180 yards to the elevated green. But his shot was a clunker coming out of the short rough, and while he hit a tough pitch to 6 feet, he read a fraction too much break in the putt and had to settle for par.

On the short 16th, he pounded another drive within 60 yards of the pin, but his wedge came up well short and he missed from 15 feet.

“I’m definitely not disappointed with today, but I left a lot out there,” Thomas said.

He did enough to shorten the number of challengers in the winners-only field that starts the new year at Kapalua. Only five players were within five shots of the lead going into the final round.

“Just doesn’t have any weaknesses at all in his game,” Matsuyama said. “He hits it long, has a marvelous short game, putts well, hits the ball well. We’ve got to go low tomorrow to be able to catch him.”

Memorial winner William McGirt, one of 11 players playing the Plantation course at Kapalua for the first time, played bogey-free for a 66 and was four shots behind, along with Ryan Moore (71) and Jimmy Walker (70).

Moore was tied for the lead until Thomas drove the 14th green for his eagle and Moore missed a 15-foot birdie putt. On the next hole, Moore’s tee shot plugged into the steep face of a bunker and he had no choice but to pitch out sideways, leading to another bogey.

Dustin Johnson had a 69 and was in the group seven shots back. Jason Day, playing for the first time since the Tour Championship, was eight back.

Playing alongside Jordan Spieth, Mackenzie Hughes posted an even-par 73 to sit at 1-under par overall in a three-way tie for 29th.

Spieth had another double bogey, this time on his second hole, and shot 70. He was 10 shots back.