Thomas wins Boston for 5th title of the season 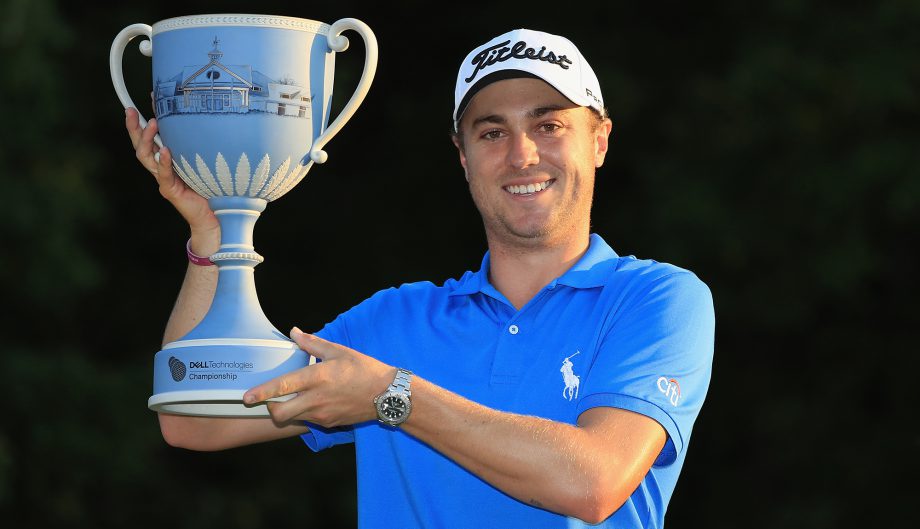 NORTON, Mass. – The victories keep piling up for Justin Thomas, and all that does is make him want more.

In a Labor Day finish that was harder than the final margin suggested, Thomas kept his patience when Jordan Spieth shot out to a brief lead and Marc Leishman built a two-shot lead at the turn. Keeping his mistakes to a minimum, Thomas outlasted them both by closing with a 5-under 66 for a three-shot victory in the Dell Technologies Championship.

He started the PGA Tour season at No. 34 in the world with all of one PGA Tour victory.

Thomas won for the fifth time Monday, including his first major three weeks ago at the PGA Championship. He is No. 4 in the world. And barring Spieth running the tables the rest of the FedEx Cup playoffs, the 24-year-old Thomas would seem to be a lock to be voted PGA Tour player of the year.

“I have two events left. I have two more opportunities to win,” Thomas said. “And I’d love to make it six or seven wins.”

Thomas made only two bogeys all week, the last one putting him in a three-way tie with seven holes to play. He won on the back nine at TPC Boston with a sand wedge he gouged out of the rough to 6 feet on No. 13, a gap wedge to 4 feet on No. 15 for another birdie, and a 6-foot par save that kept him two shots clear.

Spieth wasted a start that riled up the New England crowd – birdie-eagle-birdie-birdie – by missing the 14th green with a 5-iron for bogey. Needing an eagle to stay in the game on the par-5 18th, Spieth pushed a 4-iron into a tough lie in the bunker, blasted over the green and made bogey for a 67.

Spieth was runner-up for the second straight week in the FedEx Cup playoffs. He lost a three-shot lead to Dustin Johnson on Long Island. There wasn’t much he could have done to stop Thomas, his best friend in golf since they were teenagers.

“Came out firing, like I said we had to do,” Spieth said. “Eight through 14 is the meat of the golf course. You want to get through even. I got through over par and didn’t get any coming in when I hit some good putts.”

Spieth still moved to No. 1 in the FedEx Cup with one more event before the $10 million prize is decided at the Tour Championship.

Leishman shot 30 on the front to build a two-shot lead, only for it to vanish quickly. He had to save bogey on No. 10 after an errant drive. He three-putted from long range for bogey on the 11th. He found a bunker on the 12th for a third straight bogey. And then he closed with two bogeys that only cost him money. Leishman shot 70.

Johnson, the No. 1 player in the world coming off his fourth victory of the season last week, started the final round three shots behind and was one of the few players who was never in contention. He took two to get out of a fairway bunker and made bogey on the par-5 second hole, and he closed with a 73 to finish 10 behind.

Mackenzie Hughes of Dundas, Ont., and Adam Hadwin of Abbotsford, B.C., were the low Canadians at 8 under and tied for 13th. Hughes shot up the leaderboard after a 67 while Hadwin, who started the day two shots back of the lead, struggled to a 73. Nick Taylor (72), also of Abbotsford, finished 2 over and Graham DeLaet (70) of Weyburn, Sask., was 7 over.

Spieth was simply dynamic at the start. He didn’t need to make a putt longer than 12 feet to go 5 under for the opening four holes and briefly take the lead. Leishman, who won at Bay Hill in March, kept stride with six birdies on the front nine to match Spieth’s 30 and move in front.

Thomas did his part to stay in the game.

He could hear the crowd celebrating Spieth’s short birdie on the fourth hole, and then Thomas belted a low slider of a drive that barely cleared the deep bunker, hit into the shaggy collar and hopped onto the fringe. He holed that 30-footer for an eagle, and the race was on.

Phil Mickelson birdied three of his opening four holes. He couldn’t keep pace. Neither could Jon Rahm or Paul Casey.

The final round was so tight that Thomas, Spieth and Leishman were tied for the lead with seven holes to play. But then it all changed when Spieth missed the green at No. 14, did well to hit a flop shot to 15 feet and narrowly missed his par putt.

Thomas steadied himself after his lone bogey on the par-3 11th. Equipped with a one-shot lead because of Spieth’s bogey, Thomas hit a sand wedge to 4 feet on the 15th for a birdie and a two-shot lead. Equally important was his pitch out of deep rough to the right of the 16th to a green that ran away from him. He managed to hit it 6 feet and twice clutched his fist when it dropped for par.

Spieth grazed the edge of the cup with a 10-foot birdie attempt on the 17th, and then lost all hope with his approach into the bunker.

It was the first time Spieth has finished runner-up to Thomas, his best friend in golf since they were teenagers.

Kevin Chappell bogeyed his last hole and still managed to nudge Charley Hoffman by a fraction of a point to earn the 10th and final automatic spot on the U.S. team for the Presidents Cup.

Stewart Cink closed with a 68 to finish 12th, more than enough for him to advance to the third FedEx Cup playoff event outside Chicago for the first time in seven years. Emiliano Grillo and Rafa Cabrera Bello also moved into the top 70 to advance to the BMW Championship in two weeks.