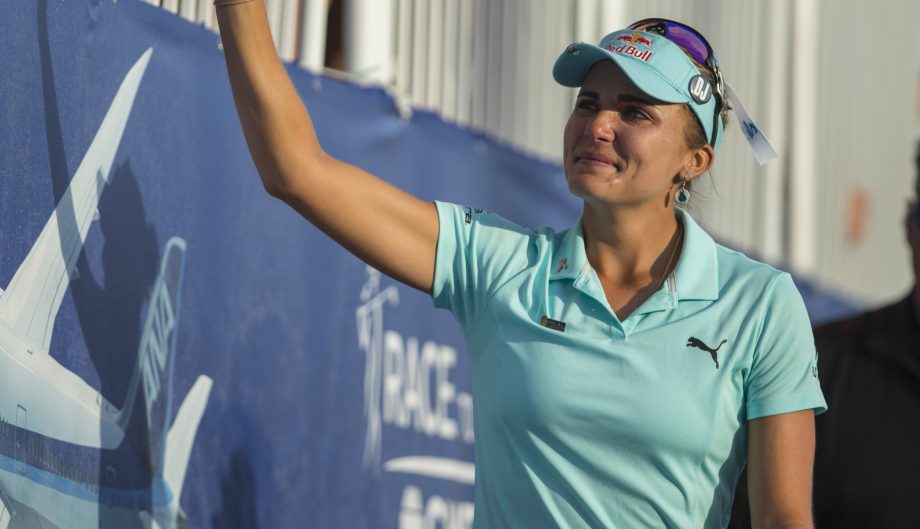 IRVING, Texas – Lexi Thompson paused, tears welling up in her eyes, when asked about how difficult things have been since a viewer-cited penalty cost her what appeared to be a sure victory in the LPGA Tour’s first major of the year.

Thompson stopped for more than 30 seconds after starting to answer the question Wednesday, a day before teeing off in Texas for her first tournament since the ANA Inspiration in California.

“That’s one of my favourite tournaments, and it’s always a dream of mine to just see myself jumping into Poppie’s Pond,” said the 22-year-old Thompson, who got to do that after winning at Mission Hills in 2014. “I played amazing that week. I don’t think I’ve ever played better, and just for that to happen it was just, it was kind of a nightmare.”

On the 13th hole in the final round April 2, Thompson had a three-stroke lead before being informed that she was being penalized four strokes for an infraction on the 17th hole the previous day that was pointed out by a television viewer by email.

Thompson, in her first media session since losing in a playoff at the ANA, said she didn’t intentionally put her ball back down in the wrong spot before making the 15-inch par-saving putt on the Dinah Shore Course with absolutely perfect greens.

“I have seen the video and I can see where they’re coming from with it. It might have been, I guess, me rotating the ball,” she said. “I have always played by the Rules of Golf. … I did not mean it at all.”

Golf’s ruling bodies just this week issued a new decision that limits the use of video evidence and could spare players from being penalized even if they violated a rule. The decision went into effect immediately on all tours around the world.

Players can avoid a penalty if the violation could not be noticed with the naked eye. Rules official also can eliminate penalties if they feel players made a “reasonable judgment” in taking a drop or replacing their golf balls on the putting green.

Thompson said she hadn’t read too much into the changes, but said, “any rule that’s made to make the game more simple, I think, is great for the game of golf.”

The U.S. Olympian also hadn’t spoken to any LPGA Tour rules officials about the new rule, and didn’t know if she would have been penalized had the new standards been in effect three weeks ago.

On the placement that got her penalized, Thompson said she was trying to take her time and make sure she made that putt after a birdie attempt that came up short on the 27th of 28 holes she had to play that Saturday at Mission Hills because she also had to finish her second round.

“I got up to it and thought about tapping it in, but I was pretty mad after my first putt because I put a terrible stroke on it,” she said. “My dad always told me I’ve missed a lot of putts by just going up and tapping them in. I’ve stubbed a few, done all that. I was just like ‘Lexi, just relax, mark the putt, it’s a major championship, you don’t need to go up and miss this little putt.”

So Thompson marked her ball, took a practice stroke, took a deep breath and made sure she made the putt.

Thompson, the fifth-ranked women’s player in the world, has three top-four finishes in her six starts on the LPGA Tour this season.

“I’m very excited. I’m happy to be here in Texas,” she said. “I’m really focused on this week to just get back playing again. My game is in a great spot. … I’ve been working hard the last three weeks, so I’m excited to tee it up and get this all behind me.”