Thongchai Jaidee of Thailand wins European Open by one shot 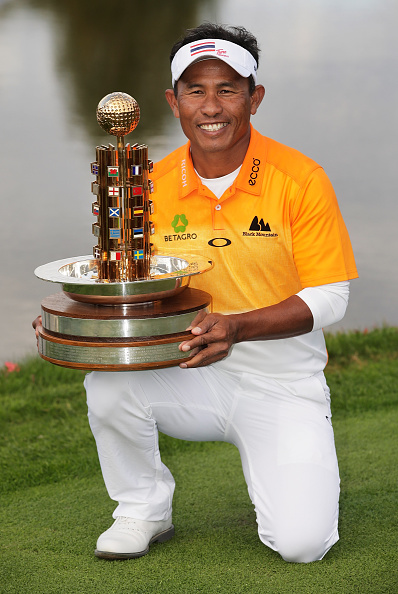 BAD GRIESBACH, Germany – Thongchai Jaidee of Thailand shot a bogey-free 67 to win the European Open by one shot on Sunday.

Jaidee, the overnight leader, had four birdies to add to his rounds of 68, 68 and 64 for a 17-under 267 on the Bad Griesbach course in southeastern Germany.

“It is the third time I have won outside of Asia, so I’m very excited about that,” Jaidee said after claiming his seventh European Tour title. “I didn’t make many mistakes this week – only one bogey all week. I played very nicely and 17 under is some score for me.”

The 45-year-old Jaidee became the oldest player to win the European Open since Colin Montgomerie in 2007 at age 44.

Graeme Storm of England had five birdies in his round of 67 to finish second with a 16-under score of 268.

Pelle Edberg of Sweden was third at 14 under after a mixed round of 69 with four bogeys and six birdies.

Veteran golfer Bernhard Langer carded a 69 to finish as the highest placed German at 8 under.

“I hit some of the best shots I have ever hit,” the 58-year-old Langer said. “I just couldn’t make the putts … Putting is a big part of the game, but my putter was ice cold this week.”

Toronto’s Albin Choi finished the competition 4-over 288 in 65th place.