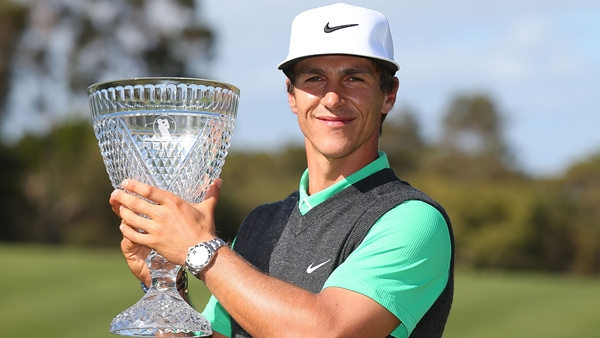 PERTH, Australia – Thorbjorn Olesen of Denmark made a series of spectacular saves in defense of a shrinking lead to shoot a 1-under 71 Sunday and win the Perth International golf tournament by three shots.

Olesen started the final round with a three-shot lead which dropped to one after 12 holes in the face of a concerted charge by Frenchman Victor Dubuisson, who matched the day’s best round of 66 to finish outright second.

Olesen made good his win with a vital birdie on the par-5 15th to claim his second European Tour title with a 17-under total of 271.

Dubuisson started in eighth place, six shots off the lead, moved up the leaderboard with two birdies on his outward nine, then a sequence of four birdies between the 11th and 15th holes. His card was unblemished, with six birdies in total, but he couldn’t close further on Olesen who kept his nerve in trying positions.

“I missed a few short putts in the middle of the round. I think the lead got down to one shot and I was just thinking about getting my round back to under par, keeping loose and seeing if I could make a few birdies coming in,” Olesen said.

“It was a tough day but it was worth it. That walk down 18 was beautiful.”

Dubuisson finished at 14-under and England’s Mark Foster was outright third at 13-under.

Olesen’s win was his seventh as a professional and his second on the European Tour after the 2012 Sicilian Open.

Former U.S. Masters champion Charl Schwartzel of South Africa shot a 72 to finish in a tie for 15th, while Jason Duffner, in his first tournament after almost three months off with a neck injury, finished at 6-under in a share of 23rd.

Olesen showed his scrambling ability as early as the par-5 seventh hole when he hooked his drive into trees but played out and got up and down for a birdie. He put his drive in a deep fairway bunker on the par-5 11th hole, was forced to lay up, but again made a birdie.

The Dane bogeyed the 10th hole, then faced the biggest crisis of his round when he hit his tee shot over the back of the green at the par-3 12th and made bogey. At the same time, Dubuisson birdied the 13th to move into outright second place, one shot behind.

Olesen steadied himself with a birdie on the 13th, restoring a 2-shot advantage. He ventured into trees again off the 14th, but saved par and then gave himself the confidence of a three-shot margin when he birdied the 15th.

“I actually made a great two putt on six for bogey, which was very important, then the birdie on seven,” he said. “My driving and a couple of three woods also were off line.

“It made it quite tricky for me but I holed some great putts coming in, really important putts and it was just a great feeling to see them rolling in the hole.”