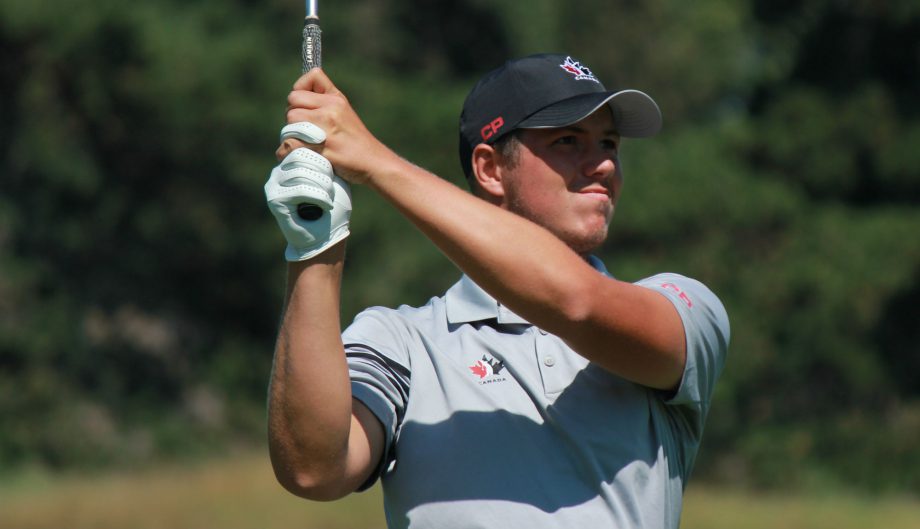 Hugo Bernard, Camilo Aguado and Stratton Nolen sit tied at 7 under par after the second round of the Canadian Men’s Amateur Championship taking place at The Toronto Golf Club and Islington Golf Club on Tuesday.

Bernard, the defending champion and member of Team Canada’s National Amateur Squad, shot a 3-under-par 67 one day after carding a 66 to co-lead the championship by one stroke. The 22-year-old recorded four birdies and a single bogey during a round that never felt quite right for the Mont-Saint-Hilaire, Que., native.

“It was a grind from No. 1 to No. 18,” he said, after his round at The Toronto Golf Club. “It wasn’t my best ball-striking, but my short game was there and my putting was there too which helped put together a good round.”

Through two rounds, Aguado has matched Bernard’s opening round scores. On Monday, the 23-year-old from Colombia, shot his first bogey-free round in competitive play and then followed it up with another bogey-free round on Tuesday.

“I made some changes with my coach over the last two weeks,” he said, at the 18th green of Islington Golf Club. “My swing has since felt easier and my misses more predictable. There’s just something that I like about these two Toronto courses.”

Vaulting up the leaderboard was Austin, Texas native Nolen. The 22-year-old carded a 6-under-par 64 to tie the competitive course record at Islington Golf Course – the second to do so in as many days alongside 18-hole leader A.J. Ewart.

Nolen got off to as hot a start as you can get after he carded a birdie on each of his first six holes.

“Well, I blacked out and I woke up on seven, and I guess I was six under,” he joked. “No, but really. I was just feeling good going in – I’ve been swinging good all year – and the putts were really going in early. That’s key out here. I had six one putts in the first six holes, and that’s all you can ask for.”

Eventually, as he expected, his hot streak stopped rather abruptly.

“I knew it was going to end when I hit the tree on seven.”

Nolen carded the only bogey of his round on No. 7 and made one more birdie to end his round tied at the top of the leaderboard.

Team Quebec captured the Willingdon Cup after they won the inter-provincial competition by 11 strokes. The team consisting of Bernard, Marc-Olivier Plasse (Mercier, Que.) and Étienne Papineau (St-Jean-sur-Richelieu, Que.) shot a combined 7 under par to capture their first team championship in 20 years (1997) and seventh victory all-time

Team Manitoba finished in second at 4 over par and Team Ontario stayed even par on Tuesday to slide into third place at 7 over par.

A total of 76 players who finished 4 over par or better have advanced to the final two rounds of the Canadian Men’s Amateur Championship to be contested at The Toronto Golf Club.