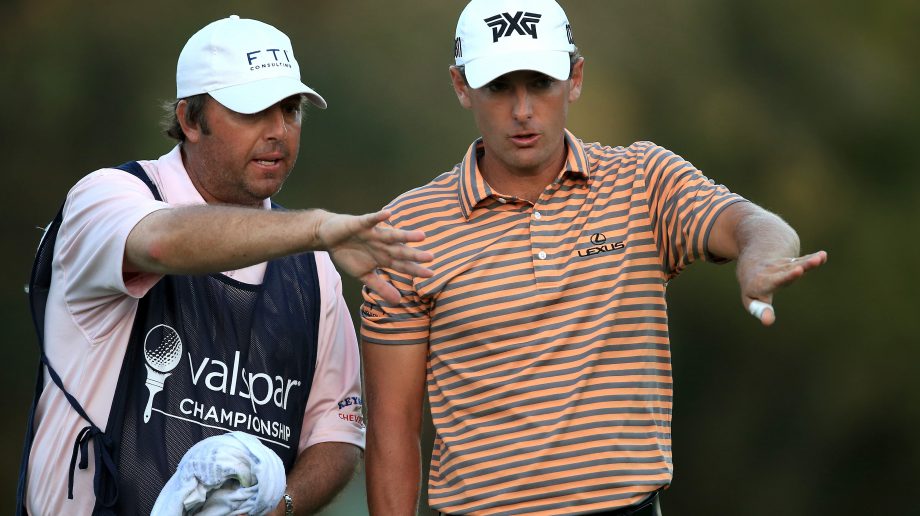 PALM HARBOR, Fla. – Charles Howell III saw a news blurb that the Masters is a month away, and the Augusta native played Thursday like he wants to be there.

In strong gusts that didn’t subside until the final few hours of daylight, Howell played bogey-free and picked up two big birdies on his way to a 4-under 67 and a share of the lead with Keegan Bradley and Ken Duke in the Valspar Championship.

“I was impressed I got away with no bogeys,” Howell said. “It was nice to get off to a good start here on a place like this. I’m not sure what the rest of the week will hold, but to actually play a nice round on a tough golf course is good for my confidence.”

Jordan Spieth wasn’t sure what to make of his day.

The defending champion had to get up-and-down to save bogey four times on his opening seven holes, and he never recovered. Spieth made only one birdie, played the final 11 holes with 10 pars and a bogey and wound up with a 76. He was nine shots behind and in danger of missing the cut for the second time in three tournaments.

“I got off to a poor start and I was behind the eight ball with gusty winds on a tough golf course,” Spieth said.

Duke also played bogey-free and made birdies on the two par 3s on the back nine that were into the wind and over the water. Bradley was the only player to reach 5 under on a day that featured 25 mph gusts, which seem stronger because the Copperhead course at Innisbrook is demanding in no wind at all.

Howell was in the penultimate group, and the wind laid down for most of the back nine. His play was solid throughout, however, particularly the 4-iron into a left pin that settled a foot from the cup on the par-3 eighth. He picked up another bonus birdie on the par-5 11th with a 45-foot putt.

Howell, perhaps more than any other player from the Augusta area, is linked to the Masters.

He hasn’t played the Masters since he tied for 19th in 2012, and Georgia is on his mind as the first major of the year gets closer.

“Always this time of the year, the Masters’ carrot looms,” Howell said. “When April comes around it has a different feel – at least for me – than the other majors. So when the Masters comes around and I’m not in it, then it’s a bit of a wake-up call or a kick in the rear to somehow make one last push to try to get in it.”

It’s not his desire alone, and Howell realizes that.

He was happy to see Augusta resident Vaughn Taylor qualify by winning at Pebble Beach, and Kevin Kisner (Aiken, South Carolina) qualify through a sensational 2015. He knows that the Masters means as much to Scott Brown (Aiken) as him.

“It’s not like it’s more special to me than anyone else. Everyone feels that way about it,” Howell said. “But yeah, it’s such a great event. It would be nice to somehow find a way to get there.”

Howell likely would have to win a tournament because he is No. 128 in the world, though he did consider one alternate route.

“I may send my application in for the Drive, Chip and Putt,” he said with a laugh. “Maybe I can find a spot in Tampa to try to qualify. Just to get on the grounds with golf clubs in my hands would be great.”

Bradley also needed a round like this. He has missed the cut in four of his five starts this year, and recently switched to a new swing coach. Bradley’s last victory was at Firestone in August 2012. He has fallen to No. 88 in the world.

“It’s been tough,” Bradley said. “It’s no fun playing poorly out here. I see all my buddies up there doing well and it feels not fun to feel like you’re on the outside looking in. So I’ve been working the hardest in my career.”

It was hard work at Innisbrook, especially in the morning when the wind was at its strongest and only four out of 72 players managed to break 70. Several players took advantage of calmer conditions late in the day.

Chesson Hadley was one shot behind with a 68.

Chez Reavie was bogey-free and joined Charley Hoffman and Greg Yates in the group at 69, while Martin Kaymer and Henrik Stenson were among those at 70.

“Just keep hanging on,” Howell said. “This golf course is so difficult and there’s trouble everywhere, and I don’t expect tomorrow to be a bogey-free day. Pars are good scores.”