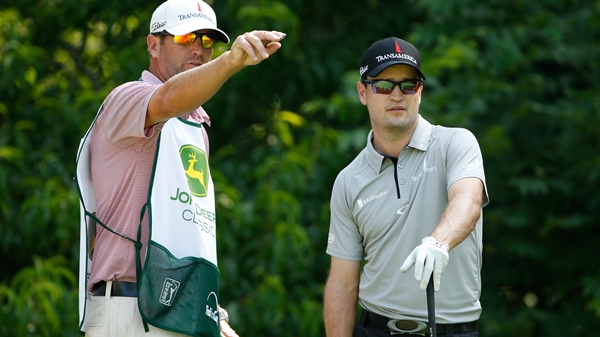 SILVIS, Ill. – Jordan Spieth felt great Thursday on the first tee of the John Deere Classic. He heard not only his name, but, for the first time, the phrase “defending champion.”

A par followed. Then another, and another after that. And then a bogey.

The playoff winner from 2013 was suddenly reeling.

“It was a struggle,” Spieth said of the round, an even-par 71 he salvaged with birdies on the 16th and 17th holes. “I need to go find something on the range because I just wasn’t comfortable over the ball today.”

Spieth was eight strokes behind Zach Johnson, Rory Sabbatini and Brian Harman, whose 8-under-par 63s shared the lead after the opening round.

Then again, Spieth was six strokes behind the leaders entering last year’s final round, and rallied to win, beating Johnson and David Hearn in a sudden-death playoff.

“It’s going to take some incredible golf,” said Spieth, sixth on the PGA Tour money list. “But I’m putting well, so when I find my swing, I can maybe take it deep.”

That’s where the leaders were.

Johnson and Sabbatini played bogey-free golf, while Harman had nine birdies and one bogey on the par-71 TPC Deere Run – even though his regular caddie had to drop out.

Harman, who bettered his best round of the year by two strokes, was 2 under through six holes when his caddie, Scott Tway, took ill. Jay Hatch of Davenport, Iowa, a high school basketball coach, volunteered from the gallery, and carried Harman’s bag the last 12 holes, which Harman played in 6 under.

Harman didn’t miss a beat when his caddie took ill.

“I called a medic over and Scottie said he was going to have to sit out at least a couple holes,” Harman said. “Jay was standing there and said, `I’ll do it. I’ll keep up.’ ”

Checking his own yardages, Harman birdied seven of his last 12 holes, and nine overall.

“If you go out and birdie half of the golf course, you feel you’ve done fairly well,” Harman said.

Johnson, who won the Deere in 2012, birdied four of his first five holes and was 6 under on his opening nine. He won the Tournament of Champions in January, but described his recent golf as “going through the motions too much.” He hasn’t finished in the top 10 since a tie for sixth in the Texas Open in March.

“I was a little spent,” Johnson explained. “I played too much and I was anxious for results. I got ahead of myself.”

“Very briefly,” Johnson said. “If you’re going to do it, you still have to hit it solid. Maybe I mis-clubbed on 6, but I could have birdied 8. I hit only one really bad shot, and that was the second shot at 9.”

Sabbatini scored his best round of the year, closing with birdies on three of the last four holes.

Birdies are a must at Deere Run. Through 18 holes, 80 players were under par and another 20, including amateur Jordan Niebrugge, at even-par 71.

Hamilton’s 64 came in his first round of the season on the PGA Tour. Playing on a sponsor’s exemption, the 48-year-old native of nearby Galesburg, Illinois, has been on the Web.com Tour in recent years.

Bowditch was 8 under after a birdie at the 17th, but bogeyed the 18th. McGirt birdied the first three holes on the back nine to jump into contention and parred the last four.

Sabbatini, whose best finish this season is a tie for eighth at the Wells Fargo Classic, closed strongly on the hilly Deere Run layout.

“I like this course and how it plays,” Sabbatini said. “It’s fun for spectators because there are a lot of fireworks, and fun for us players, too. This golf course requires the basics: hit the fairway, hit the green, make some putts.”

Four of Sabbatini’s eight birdies were from 17 feet or longer, the longest a 22-footer on No. 4. He ran in birdies on the second, third and fourth holes of his back nine, and another on his 16th, the par-3 seventh.

Hamilton, a decade removed from his British Open victory at Royal Troon, birdied his first two holes and was off on an improbable round of 64.

Two Canadians are in the field this week. Brad Fitsch opened with a 1-under 70, while David Hearn was a shot back at even-par.