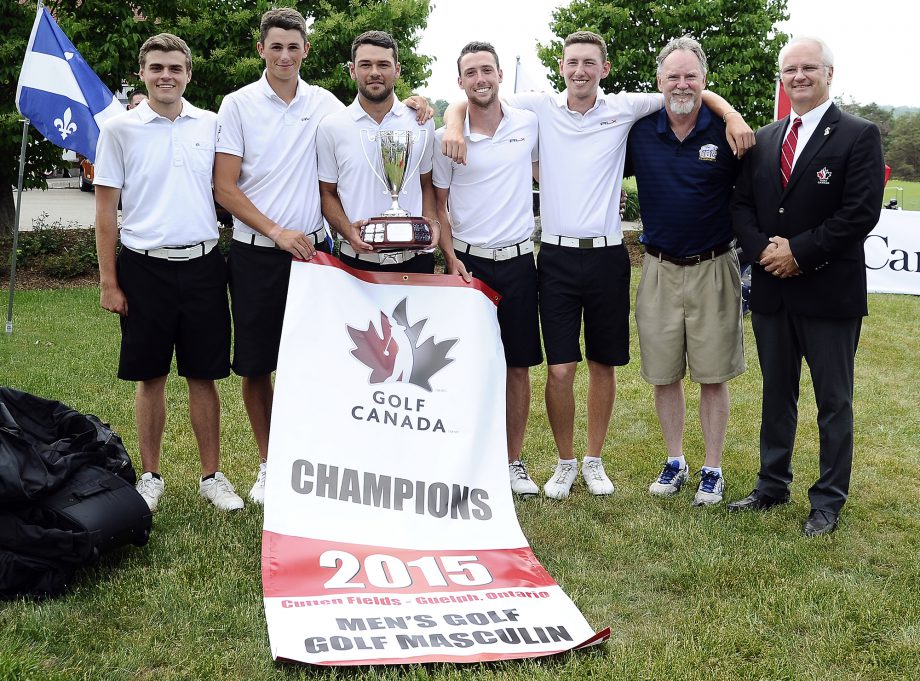 The University of ­­­British Columbia (UBC) Thunderbirds men’s team claimed a wire-to-wire victory Friday at the 2015 Canadian University/ College Championship at Cutten Fields in Guelph, Ont., while the Université de Montréal Carabins earned the national title in the women’s division.

“One of the most important things (for our team) was on day two – when we had the 50 to 60 km winds – that was very emotionally challenging. The ability for our players to refocus and come out and play really exceptional golf was very important to our team,” said UBC Thunderbirds acting men’s coach Peter Crocker when asked about a pivotal moment during the week.

UBC Thunderbird Evan Holmes posted a 1-under par final round 69 for a four day total of even-par 280 to be crowned the 2015 Canadian University/ College Men’s individual winner.

“My short game was pretty good all week and that carried on to today,” Holmes said of his victory-clinching round.  “I hit a lot of green-side shots well after some not so good shots.”

The Calgary, Alta., native’s solid short game was on full display when he stuck his approach shot on No. 18 to within a foot. “It was pretty nice just walking up to the green knowing that I kind of had it won.”

Queen’s University Gael Russell Bowie made a charge with four straight birdies from holes 12 to 15 to finish runner-up, two shots back at 2 over 282. Aaron Pauls of the University of the Fraser Valley Cascades finished third at 3 over 283.

The Université de Montréal Carabins women’s team entered the day with a one-shot lead over the University of Victoria Vikes; they managed to seal the win after a final round of 228 gave them a team-total 924. Team members Julie Brossoit, Caroline Ciot, Veronique Fortin-Latreille and Sarah-Andréa Landry captured the school’s second national collegiate championship.

“I’m really proud of my team, they worked hard all winter,” said Nicolas Quirion, the Université de Montréal Carabins women’s coach. “It’s like a family, they count on each other and it’s really fun to coach a team like that.”

The University of Victoria Vikes women’s team secured a second place finish just 3-shots back of the champions on the strength of a solid team effort. The Vikes shot their lowest team score of the tournament (227) to finish at 927. The defending UBC Thunderbirds carded a team total 12-over par 225 during the final round to finish 3rd at 928.

Fifth-year senior Brynn Tomie of the Victoria Vikes shot a 4-over par 75 to edge out Caroline Ciot of the Montréal Carabins for the win.

“It was a total grind today,” said Tomie who finished with a four-day total of 300. “Caroline played amazing. We were back-and-forth all day. It was so fun to play with her, and things just kind of fell for me.”

Standing on the 18th tee, the pair were knotted, but Tomie would go on to make par on the final hole to claim the championship. “We were both pretty aware of where we were and we both knew what the putt on the last hole meant,” smiled a beaming Brynn once the victory had sunk in.

Rounding out the top three was Alexandra Pelletier of the Université Laval Rouge et Or, who carded a round of 4-over 75 to finish at 304.

Conducted by Golf Canada, the Canadian University/ College Championship recognizes the exceptional talents of student-athletes from across the country. The 2016 edition of the event will be hosted by Morningstar Golf Club in Parksville, B.C.

Additional information regarding the 2015 Canadian University/ College Championship can be found here.