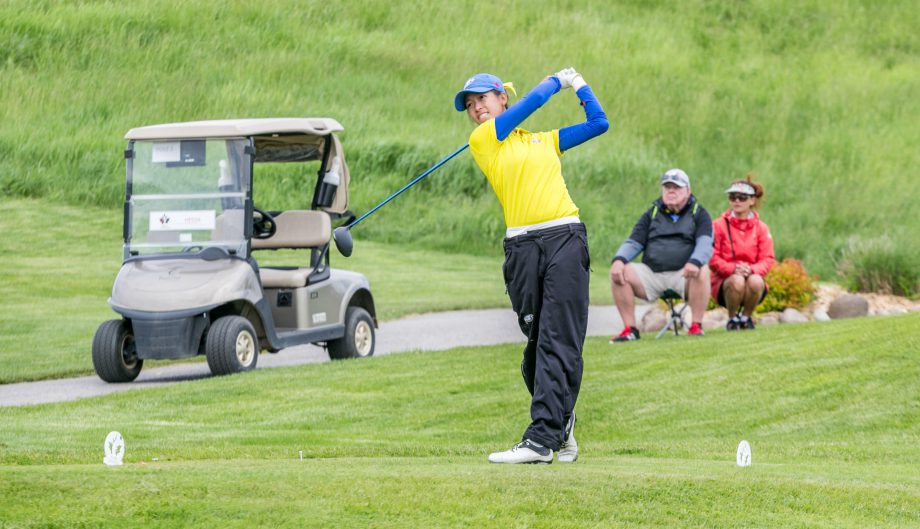 The dream of every athlete is to go out on top, to go out a winner.

But on Sunday at the 2017 Canadian University/College Championship Kat Kennedy did just that.

As she watched her final putt drop, Kennedy walked off the green and into the arms of her teammates after a dominating 15-stroke victory in the individual women’s division, leading her University of British Columbia Thunderbirds to its second consecutive title at the event.

And she did so at her final event at the end of her university golf career.

“It feels amazing to end my last tournament of my university career on a high note and with such a good team,” said Kennedy, after securing herself and her team at the top of the leaderboard. “It feels awesome right now.”

The 22-year-old science student from Okotoks, Alta., has hung up her Thunderbirds’ gear after successfully defending her 2016 title and plans to finish her undergrad degree next year.

Like most collegiate athletes, Kennedy’s commitment to the golf team has allowed her to pursue a higher education, but the time commitment to her sport means she must pick up a few more credits in her fifth year.

“I love golf,” she said. “I love the game. I just want to keep playing as long as I can. I still have one more year left, so I have some time to decide what I want to do next. Right now, I’m going to focus on school and keep playing and improve my game as best as I can.”

The weather was not kind to Kennedy and the other players during the championship, which was held from May 29 – June 1. Two thunder delays, constant rain and a windy, cold final round lashed out at the field. But there behind Kennedy for every shot sat her parents, Tai and Len, on tiny portable stools they carried with them as they followed her around.

The two are, of course, her biggest fans and have traveled to every Canadian tournament she has played in as well as many down south in the United States. They are so committed to their daughters play that they don’t even take a hole off – even during the six-degree, extremely windy final round on June 1.

“Never,” said Tai, when asked if she was going to warm up for a couple of holes in the clubhouse after Kennedy made the turn. “She always wants us to be there. With some kids they always want their parents to stay away, but for us she’s always like, ‘I’m glad you’re here.’”

For Tai, golf isn’t just a game that her daughter plays for a way to go to university. It’s a part of her that has contributed to her growth as a human being.

“It keeps her grounded,” she said. “I’m really happy that she’s on the golf team. She works very hard and strives for the best. That’s what she tries to do every day: become a better person.”

Follow Kennedy for a couple of holes and you can see what Tai means.

Whether she’s lining up for a shot, walking to her ball or retrieving it from the cup, there is a constant laser-like focus in the way she carries herself. Even when she was leading by over a dozen strokes heading down the final fairway, that focus never wavered.

Tai doesn’t know where that work ethic comes from. “That’s just her,” she says. But it’s a major part of the reason that she has never missed a tournament in her Thunderbirds’ career – a goal she set for herself when she first joined the team.

Like many student-athletes, Kennedy started to excel at golf at a very young age. It wasn’t long until she was carding better scores than her father, Len.

“She started to pass me on the course when she was about 14 or 15,” said Len, (not at eight like Tai teased). “It made me feel really proud. She taught me real early to keep my mouth shut when making a bet with her. Don’t say you’ll give her 50 bucks to make a long birdie putt because she’ll put it in.”

As for her next step, Kennedy is still unsure.

She is going to finish her science degree next year while training and working on golf by herself. When she completes her education she is going to decide if she is ready to go pro or not.

In a true testament to her character that the game of golf helped build, she was permitted to play for the team in her fifth year, but she turned down the offer because she felt that it would be unfair to take away that spot from someone else.

Now that she’s done, Tai and Len are ready to retire their trusty stools they always carry around when following her, and they can watch as their daughter takes the next step.

“Golf put her through university,” said Tai. “I’m happy she’s going to get her degree and an education. That’s the main thing. Now I guess I have put this stool on Kijiji.”