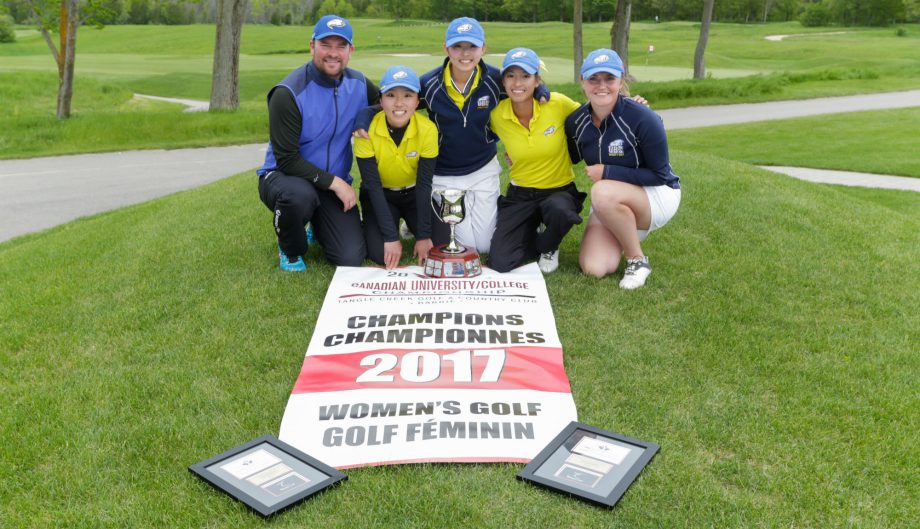 The Thunderbirds dominated the field through all four rounds of the tournament. Heading to the final day they sat 41 strokes ahead, and on Thursday they cruised through their final round and finished 70 over for the tournament to successfully defend their 2016 title.

Leading the way for the University of British Columbia was defending champion Kat Kennedy who led all four rounds to capture medallist honours. Her final-round 78 was the lowest of anyone in the women’s draw and helped her finish 14 over par for the tournament, 15 strokes ahead of field.

“It feels amazing to end my last tournament of my university career on a high note and with a great team,” she said, after she sank her final putt. “It was tough out there today. This was the most wind we’ve had all week, but we just tried to play calm and steady and play our game.”

The University of Toronto Varsity Blues and the University of Victoria Vikes were deadlocked heading into Thursday, but the Varsity Blues prevailed after their 41-over-par 257 locked them into second place, 53 strokes behind the Thunderbirds. The Vikes ended up third, 128 over par for the tournament.

Varsity Blues’ Laura Upenieks carded a final-round 84 to bring her total score to 29 over, while Sharon Park of the University of the Fraser Valley Cascades finished at 30 over to round out the top three.

The men’s division came right down to the wire as the Rouge et or, the Wilfried Laurier University Golden Hawks and the Thunderbirds were all jockeying for position during the final round.
Eric Flockhart of the Golden Hawks made it interesting on the 18th green when he tapped in a par putt after Mory made bogey, but it proved to be too late as the Rouge et Or walked away with a two-stroke victory at 75 over par for the tournament.

“It’s incredible,” Mory said, after he and his teammates erupted in cheers following the official announcement “I thought after I made a six on 18 that we were going to go to a playoff, but it managed to be enough. It was very difficult to make the right distance today because of all the wind, but I managed to hang in there for my team.”

The Thunderbirds finished five back of the Rouge et Or in third place on the strength of Evan Holmes who captured medallist honours with a 5-over-par effort. Mory finished five back in a share of second place with Varsity Blues’ Kevin Fawcett, who shot a tournament-low 2 over par in the final round.

Click here for information and here for final results.