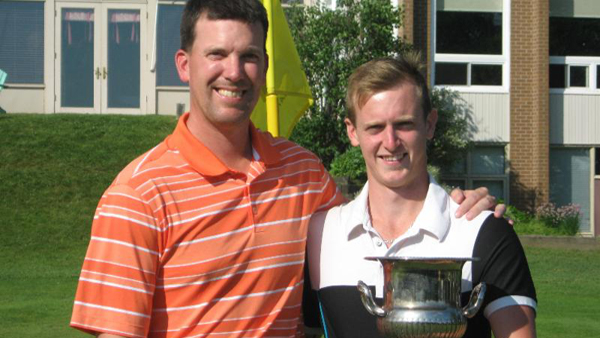 Tidcombe, an accomplished golfer, had never won a provincial championship as an individual until July 6th, where he claimed the MCT Insurance Men’s Amateur title.

Tidcombe edged out Grandview’s Andrew Reid by two strokes at the rain-shortened 54 hole event, with much of the final round being a back and forth competition between the two young talents.

“It feels great,” said Tidcombe. “I put a lot of work to get into contention. Obviously last year at Northumberland I was disappointed with my result after coming off a good season at school, but that happens in golf, and I managed to use that to fuel the fire and I got the job done here this year.”

In 2009, Tidcombe narrowly missed a chance to become the youngest golfer in NSGA history to win the provincial amateur, however he lost in a playoff to Ken-Wo’s Sam Holland. When asked how it feels to put some of those playoff loss demons to rest Tidcombe explained how that experience helped him.

“I learned a lot from that year,” he added. “It was the first time I had the lead at a big tournament like this, and it really taught me that staying in the present is key, and from that I was better off here today.”

Tidcombe (-1) was paired in the final group with Oakfield’s Brad Curren (-2), who was the leader heading into the final round, and Andrew Reid (-1) who led after the opening round.

Curren fell out of the running with +4 after the first 4 holes, leaving Tidcombe and Reid to battle it out.

“I had a very similar shot four years ago at the junior, on that one I lipped out,” he explained. “But, I said to myself this time you’re putting it in.”

He did, and eventually took a two shot lead over Reid to win.

Tidcombe, Reid and Steven Spicer will represent the province at the Canadian Men’s Amateur Championship at Elmhurst Golf and Country Club in Winnipeg from August 4-7th. Ashburn’s Trevor Chow will serve as an alternate.

For full results and information on the 2014 MCT Insurance Men’s Amateur, click here.