Tiger arrives, and the guessing game begins at Masters 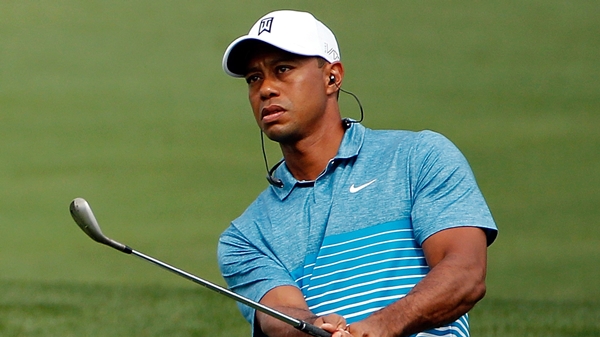 AUGUSTA, Ga. – Tiger Woods arrived later than usual Monday for a Masters that is different from all the others he has played.

No one was sure what to expect from him.

Woods offered a quick glimpse that it could be just about anything. He hooked his tee shot so far left that it nearly went into the ninth fairway. And then he hit a shot to about 6 feet and rolled in the putt for birdie.

More relevant than any of his shots – including his chipping, which looked fine – was the atmosphere.

The first official day of practice at Augusta National was filled with warmth and optimism for the first major of the year. Rory McIlroy, No. 1 in the world and going for a career Grand Slam, played 18 holes with British Amateur champion Bradley Neil. Steve Stricker is playing for the first time all year. Jason Day took four hours on the back nine alone, letting groups through so he could chip and putt, the key to winning a green jacket.

And then Woods arrived.

Fans ran to the side of the practice area when his cart pulled up, with one man holding a digital camera high above his head for a picture. Fittingly, Woods headed straight for the chipping area and went through two bags of balls before heading to the first tee with Mark O’Meara.

Woods is playing for the first time since Feb. 5. He was off nearly five months when he returned at the Masters in 2010 following the scandal in his personal life, but he was No. 1 in the world back then. His last competition was a victory in the Australian Masters.

Now he is No. 111. In his last tournament this year, he walked off the course at Torrey Pines after 11 holes. Before that, he shot 82 and missed the cut in the Phoenix Open. In both events, he played 47 holes and hit chips that either didn’t reach the green from 5 yards away or went some 25 yards over the green.

That’s when he stepped away, saying his game was not acceptable and he would not return until it was.

The real test comes Thursday, when the shots count. What he showed Monday certainly looked acceptable, and it was a treat for the fans who normally would be headed home after a long day at Augusta. The first hole was packed when Woods and O’Meara teed off at 4:20 p.m., and more than 2,000 kept following him. Dozens of fans raced over from the second fairway to the fourth tee to get a good spot.

“I hope he’s happy. I hope he’s fine,” U.S. Open champion Martin Kaymer said. “I hope he will play well this week. But what would bother me a lot is all the speculation. You don’t have a choice. You will read about it somewhere. You will hear about it because you socialize with people. So mentally, it must be quite exhausting, and we know how important the mental part is in golf.”

“So it’s difficult, and some things I don’t find very fair,” he said. “You should just let him be. Let him play golf, what he likes to do.”

The last image of Woods was the best player of his generation at his worst, especially with the chipping. That led to rampant speculation – some coaches, including former swing coach Hank Haney, said he had the yips. He was said to be practicing hard at home in Florida. When he showed up at Augusta National last week to practice, one report said he shot 74. Another said he was playing better than ever at home.

The fans who stuck around the Masters got to see for themselves, at least in practice. The real show starts Thursday, and everyone is curious.

“We’re all waiting with baited breath what Tiger is bringing,” three-time champion Nick Faldo said. “He’s got to believe he’s got a bit more game than that. This is not the place. These are the toughest chipping areas, but off perfect lies, anywhere in the world. … It’s all nerve. That’s what the Masters is. It’s nerve. It’s the most nerve-wracking golf course.”

Most of the cheers late in the afternoon came from the par-3 16th, where players were skipping shots across the water and onto the green. The other cheers followed Woods, especially that shot over the pine trees and at the flag for his birdie. Woods then tossed a few balls short of the green to chip.

“Fore!” one fan jokingly said from behind the green.

He hit two at a time to where caddie Joe LaCava was standing. Woods moved around various sides of the green and chipped to different pin positions. Most of them were reasonable. Some were good.

Woods reached the par-5 second hole with ease on his second shot. He smashed a drive down the short par-4 third and hit a flip wedge that trickled a few inches by the hole.

“Golf internationally needs Tiger Woods. He does make a difference,” three-time Masters champion Gary Player said. “People say – I hear this all the time – `Well, they won’t miss Tiger Woods. There’s so many young guys that will take his place.’ There is nobody in the world today that can play like Tiger Woods at his best. Nobody yet. I’m not saying in time to come, a Rory, Jordan Spieth, Jason Day.

“As of today, there’s nobody playing like Tiger at his best.”