Tiger, Rory and Phil: A new year in golf 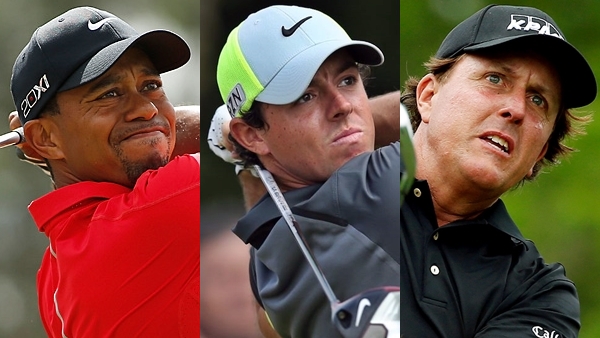 KAPALUA, Hawaii – Predictions are a dangerous business, especially in golf.

How many could have guessed that Tiger Woods, No. 1 in the world and coming off a five-win season, would play in only nine tournaments, finish only four of them and plunge to No. 32 in the world because of injuries?

Or that Bubba Watson, who had gone 38 events without winning, would finish 2014 as highest-ranked American?

Or that Nick Taylor would become the first Canadian to win a PGA Tour event in five years.

Instead, the start of a new year at Kapalua allows a look into the future – not what will happen, but at five highly anticipated events.

Already the highlight of any year, this will be the first time since 1991 that a player showed up at Augusta National with a chance to complete the career Grand Slam. That was Lee Trevino. And it wasn’t much of a chance. Trevino was 51, and he never seriously contended at Masters.

Not only has Boy Wonder captured the last two majors, he probably should have had a green jacket by now. He had a four-shot lead going into the final round in 2011 before he imploded into a series of blunders on his way to an 80.

The only potential distraction is his day in court over a lawsuit involving his former management company. The trial is scheduled for February.

If history is any indication, don’t read too much into his form during the road to the Masters. The last time one player faced so much scrutiny at the Masters was Woods in 2001 when he was going for an unprecedented sweep. Woods heard whispers that he was in a slump because he went six straight tournaments without winning at the start of the year. Woods then ran off three straight victories, culminating with another green jacket and his place in history.

There are more compelling elements at the U.S. Open than the Masters. But the U.S. Open doesn’t whet the public’s appetite in the cold of winter with the Masters commercial that made you wish April could get here tomorrow.

This year delivers back-to-back majors where someone can join the most elite group in golf with a career Grand Slam – McIlroy at the Masters, Phil Mickelson at the U.S. Open. Mickelson already had one crack at it last year at Pinehurst No. 2 and he never broke par. Lefty is in great shape physically – the public will get its first look at him in two weeks – and even at 44, he believes he will have multiple chances.

His next one will be a course no one knows. The U.S. Open goes to Chambers Bay outside Seattle, an expansive, links-looking course that hosted the 2010 U.S. Amateur but nothing of significance at the professional level.

And something else brand new for the U.S. Open – Joe Buck and Greg Norman will be calling the shots. This marks the debut of Fox Sports in major championship golf.

Woods hasn’t confirmed where he will start his 2015 campaign, but if there is one tournament to gauge his progress, mark down the Cadillac Championship at Doral.

Torrey Pines is always a good measure too – Woods, an eight-time champion at Torrey, missed the 54-hole cut last year in a sign of what was to come. But the international stars – McIlroy, Adam Scott, Henrik Stenson, Justin Rose – are not likely to be anywhere on the West Coast. For the first time, a true test for Woods is more than the golf course. It’s the field.

The first big gathering will be the Honda Classic, and while Woods was runner-up three years ago, he has never won at PGA National.

That’s what makes Doral such an interesting tournament as it relates to Woods. All the stars will be in Miami, and while Doral has undergone significant changes ever since Donald Trump bought it, Woods is a five-time winner on the Blue Monster.

America usually has a new Ryder Cup captain by now. Now it has a task force.

The next meeting of this illustrious group is not until the first week in February, and it’s anyone’s guess when it will select the 2016 captain for Hazeltine. Tom Watson didn’t work out in a loss last September in Scotland that was ugly on many levels. Fred Couples is popular with the players and 3-0 as captain in the Presidents Cup. Then again, it’s a little easier to beat an International team playing under a manufactured flag than a European team playing for its tour.

The pendulum was swinging toward the Americans before the fiasco at Gleneagles. The best thing the task force can do is not overthink this.

It’s always a special year when golf’s oldest championship returns to St. Andrews, especially when it’s time to say goodbye. This year that honour belongs to Tom Watson, playing in his final British Open, the only man to claim the claret jug on five courses (but never St. Andrews).

And it’s a chance for Watson to be remembered for what he can do with a club in his hand on a links course, instead of driving a cart at Gleneagles.