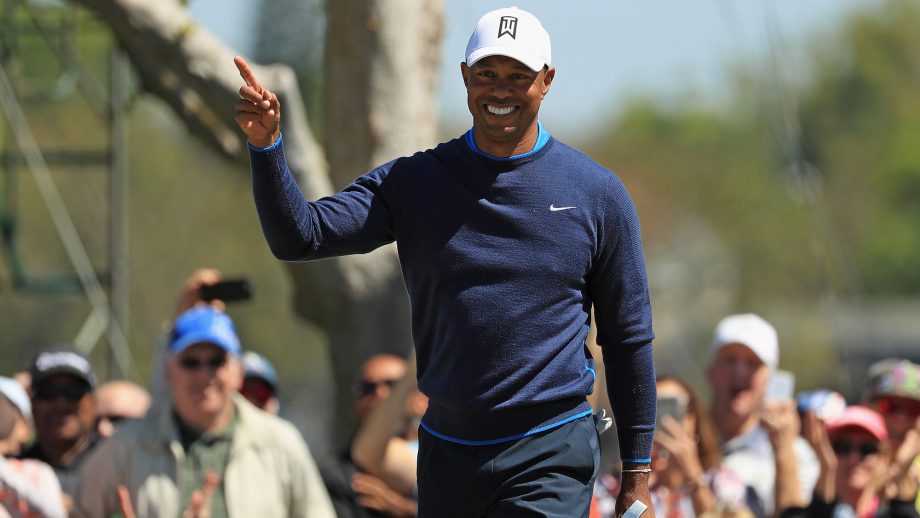 ORLANDO, Fla. – Henrik Stenson had a hot putter, a much quieter crowd and a one-shot lead in the Arnold Palmer Invitational.

One week after Stenson returned from his winter break and spent two days with Tiger Woods and his raucous crowds, he made birdie on half of the holes at Bay Hill for an 8-under 64, his lowest round ever on the course the King built.

PGA Tour rookies Aaron Wise and Talor Gooch each had 65. Wise missed a 6-foot birdie putt on the final hole.

Woods again brought out big crowds in the unseasonable chill Thursday morning and gave them quite a show. He hit a tee shot that was out-of-bounds by inches. He atoned for that with a 70-foot birdie putt. And he wound up with a 68, his best opening round since he returned this year from a fourth back surgery.

“I feel like I’m not really thinking as much around the golf course,” Woods said. “I can just see and feel it and go.”

Each week is a little better for Woods, and Stenson saw the progress last week. The 41-year-old Swede typically takes a month off between the Middle East swing and the Florida swing, and he returned last week to a grouping of Woods and Jordan Spieth. That didn’t bother him as much as his poor putting.

Bay Hill provided a change in both areas.

“It’s great to see him back competing, but it was a little loud out there last week,” Stenson said. “But that comes with the excitement of having him back and seeing him play well, so I thought it was great. … I guess it’s nice to get a little bit of a breather at times, though.”

It really helps to be putting well, especially on pure greens at Bay Hill that already had a yellow hue to them. He spent the weekend at home in Orlando working with Phil Kenyon, his putting coach, and it seemed to help. Stenson took only 20 putts, tying his personal best for fewest putts in a round on the PGA Tour.

He ran off five straight birdies around the turn, and he followed his lone bogey at the par-3 14th with two birdies and a 10-foot par save.

Woods had no complaints, and about the only thing that went wrong – except for the tee shot on No. 3 that went OB – was his prediction before he left Bay Hill. He was happy with anything in the 60s and said, “There won’t be a lot of rounds out there that will be in the 60s. The golf course is playing difficult.”

There were 13 more rounds in the 60s in the afternoon, including Ernie Els and Rory McIlroy at 69.

Only one of them was pleased with it. Els, who has gone more than a year since his last finish in the top 30, dropped only one shot, on the opening hole. McIlroy had five birdies through 10 holes and then hit out-of-bounds on the 18th hole for a double bogey.

Coming off a runner-up finish at the Valspar Championship that raised expectations of a victory being closer than ever, Woods started and finished strong, with one mishap in the middle.

His drive on No. 3, his 12th hole of the round, sailed to the right and went off a cart path and toward the houses. Only when he reached the ball did Woods find it had rolled into the bottom of a mesh fence. It looked like it was in play, except the poles on the waist-high fence were the boundaries, and his ball was inches outside of them.

He went back to the tee, sprayed the next tee shot under a tree and made double bogey.

And then came the big finish – two birdies on the par 5s, including a bold flop shot from a tight lie over a bunker at No. 6, and the 70-foot putt he was hoping would be close. Woods immediately pressed his hand down, asking for the ball to slow down, and then watched it drop for a most unlikely birdie.

“I was trying to lag it down there and just make my par and get out of here,” he said. “It had to crash at the hole – which I’m not complaining – and it went in.”

He closed with a 12-foot putt to save par from the bunker.

Walker was on the other side of the golf course finishing up at the same time as Woods. He holed a wedge from 132 yards on the 18th for an eagle, matching his best score at Bay Hill. It was especially gratifying because he wasn’t even planning to play this week.

He had a trip to Augusta National planned with some friends and club members and thought it was this weekend. Instead, it was meant to be Monday and Tuesday. Walker’s wife, Erin, has a horse-jumping show in West Palm Beach. The kids are with their grandparents skiing in Utah.

“I figured I might as well play,” Walker said.

He had two days at Augusta National, didn’t have a practice round at Bay Hill and felt right at home.

“It’s just golf,” he shrugged. “Just hit the shots. I’ve done so many Monday qualifiers earlier in my career where you never see the golf course. Sometimes it helps because you’re not overdoing it.”