Tiger Woods humbled, but not in panic, over his 85 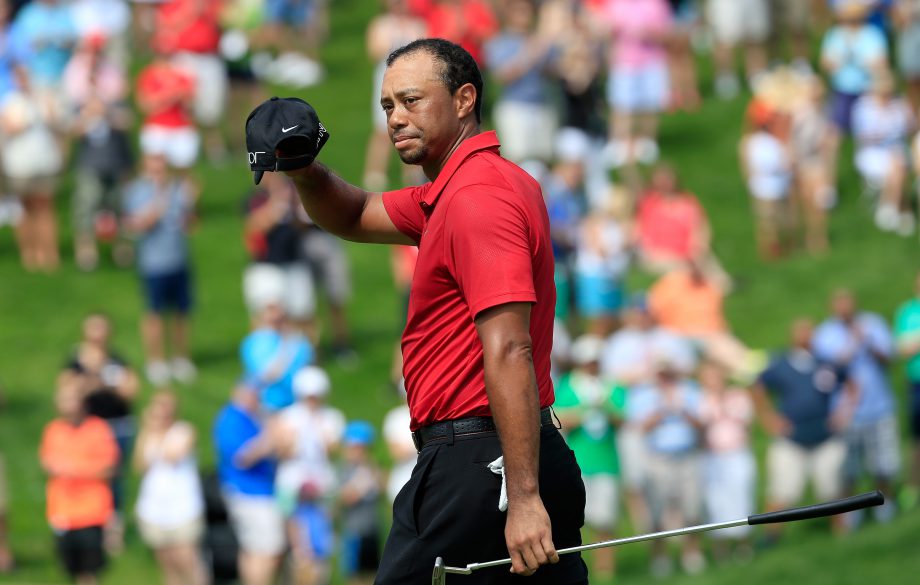 DUBLIN, Ohio – One day after the worst score of his career, Tiger Woods played the final round of the Memorial just like it was any other Sunday.

He wore his red shirt. He played at the same pace. He tossed blades of grass in the air to judge the wind and crouched to read important putts. The only difference was he played as a single. He even removed a flagstick by himself when his caddie was busy raking a bunker.

“Just because I’m in last place doesn’t change how I play golf,” he said. “Whether it’s the first day or last day, doesn’t matter. Play all out.”

All out didn’t get him much.

Woods followed his 85 with a rough finish – two double bogeys over the last four holes – for a 2-over 74. He finished in last place of those who made the cut at Muirfield Village, a course where he has won five times, and posted the highest 72-hole score of his career at 302.

He conceded that it was humbling to shoot an 85 before thousands of fans, with nowhere to hide. But he didn’t sound as though he was about to panic about his future. Woods chalked the score up to working on a new swing, and one of those days where he couldn’t make up his mind which swing he had.

“This is a lonely sport,” Woods said. “The manager is not going to come in and bring the righty or bring the lefty. You’ve just got to play through it. And that’s one of the hardest things about the game of golf, and it’s also one of the best things about the game of golf. When you’re on, no one is going to slow you down. When you’re off, no one is going to pick you up, either. It’s one of those sports that’s tough. Deal with it.

“For us, unfortunately, you have those days and they’re five hours long,” he said.

Sunday was just under three hours as a single.

He made the turn in 34 with three birdies, two of them on the par 5s. He hit five straight fairways at one point – four of them with the driver.

It was the finish that did him in. Woods hit one poor chip, and it cost him. After his wedge spun off the front of the green at the par-5 15th, he bladed a pitch about 30 feet above the hole and three-putted for double bogey.

On the 18th, he got too much air under a 3-wood and had to play a big hook around the tree. It found a back bunker, and he had no chance to stay on the green. Woods laughed when he saw the lie he had in the rough.

He chopped it out some 6 feet and two-putted for a double bogey.

“I was expecting to grind,” he said. “That to me is the fun part, going out there and just grinding and fighting for everything I possibly can out there – after shooting whatever I shot yesterday, to be able to go back out there and get to 3-under par and keep fighting.”

Woods talks a lot about being stuck between patterns of his old swing and the new one he is trying to develop with Chris Como. That’s part of the process, and one he knows well. This is the fifth time he has changed his swing since his rookie year in 1996.

Even so, he never had a score anywhere near 85 whether he was going from Butch Harmon to Hank Haney, or from Haney to Sean Foley. Woods has as many rounds in the 80s as in the 60s this year – two each.

Asked if his score Saturday felt like an 85, Woods replied, “It felt higher.”

But he played Sunday as though the third round never happened. And progress often includes a few – or 85 – steps back.

“I had to go through those painful moments, just like I did at Torrey Pines and Phoenix, to be able to make the leap I did at Augusta,” he said.

The reference was to his 82 in the Phoenix Open and pulling out after 11 holes at Torrey Pines, leading to a two-month hiatus from competition until he could play the game to his standards. He returned at Augusta National with hardly a trace of his short-game woes and tied for 17th.

“Yesterday was the same thing,” Woods said. “It was just unfortunately on a golf course like this where you can’t get away with much. It kicked my butt pretty hard.”

Woods developed a blister on the forefinger of his left hand this week. He said he probably would only putt for the next few days to let it heal, and then start working on his game for the U.S. Open. The one positive was that his 85 happened on Saturday, and not Sunday.

Imagine going into Chambers Bay with the most recent score his highest ever.

“That would have been a lot more disconcerting, if I had shot yesterday’s round today,” he said. “We would have had to probably do a little bit more work than what I’m going to have to do now. We know that it’s close.”