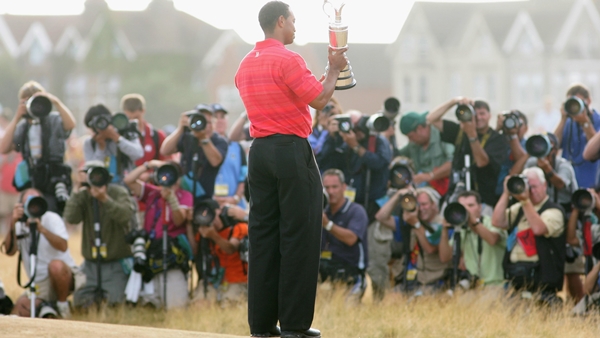 HOYLAKE, England – Tiger Woods returned to Royal Liverpool on Saturday for the first time since he won his third British Open title in 2006.

The links course looked the same – except for the color of the grass.

Woods eight years ago played on a links that was baked out and brown from weeks of sunshine. The course was so firm and fast that he famously hit driver only once in 72 holes on his way to a two-shot victory over Chris DiMarco.

The 14-time major champion arrived at the course Saturday morning on the northwest coast of England for his first major of the year.

Woods had back surgery March 31 to relieve a nerve impingement, which caused him to miss the Masters for the first time and then the U.S. Open. He returned earlier than he expected three weeks ago in the Quicken Loans National at Congressional, where he missed the cut by four shots.

There was a light rain during his practice round, the first time it has rained this week. The forecast for next week is mostly cloudy and mild temperatures, with rain possible on the weekend of the British Open.

Defending champion Phil Mickelson, Rory McIlroy, Rickie Fowler and Justin Rose were among those at Royal Aberdeen for the Scottish Open. Woods did not have Hoylake to himself. According to photos posted on Twitter by Royal Liverpool, top-ranked Adam Scott and Jason Day also were practicing.

Woods has gone nearly a year without winning. His last victory was the Bridgestone Invitational the first week in August, where he rolled to a seven-shot victory. He ended last year without a major for the fifth straight year, and got off to a slow start this year with recurring back pain that eventually led to surgery.

He has had a chance to win on Sunday in the last two British Opens. He tied for third at Royal Lytham & St. Annes in 2012, though he took himself out of contention early in the final round. And he was among several players with a chance on the back nine at Muirfield last year until Mickelson pulled away.

Woods is playing only the final two majors this year, both on courses where he previously won – Hoylake in 2006 and Valhalla for the PGA Championship in 2000.