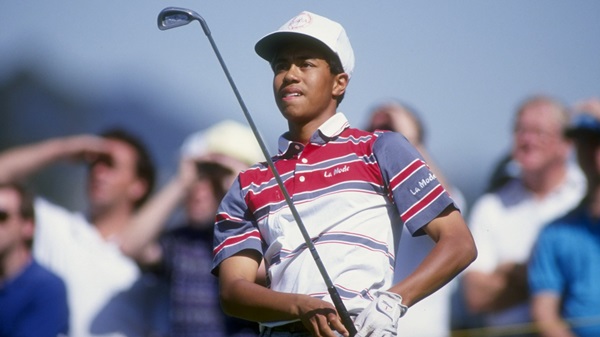 THOUSAND OAKS, Calif. – Of all the memories from Tiger Woods’ roots in Southern California, it’s easy to overlook the time he made an appearance in the Tournament of Roses parade.

Ok, so he wasn’t the grand marshal. And he had just turned 18.

Woods, coming off his first U.S. Amateur title, rode on the Chiropractic Centennial Foundation float that required seven tons of flowers to build. He wasn’t the only celebrity on the float on Jan. 2, 1995. Also riding were singer Lee Greenwood, Hall of Fame baseball player Joe Morgan and Olympic champion speedskater Cathy Turner.

The majestic float was toward the end of the order, trailed only by the Icelandic Horse Adventure Society and the International House of Pancakes.

For sure, there were far greater moments with a golf club in his hand.

Woods was only a toddler when he first went head-to-head with Sam Snead. It was only two holes, and Woods made bogey on both of them. Now, he is only four victories from breaking Snead’s record for career PGA Tour victories.

Woods made his PGA Tour debut at Riviera in the 1992 Nissan Open when he was a 16-year-old junior in high school. He might have made the cut if not for a growth spurt during the week that made the shaft in his driver too short. More on that later.

He never won what he often referred to as his “hometown event” at Riviera. He made up for it by winning five times at Sherwood Country Club, and that doesn’t include his win over David Duval at the illustrious “Showdown at Sherwood” in what amounted to Monday Night Golf.

Woods returns to Sherwood this week, in effect closing a chapter on golf in the area he always called home.

The Tiger Woods Learning Center, a superb complex that recently received a Golden Bell Award for excellence in education, remains his tie to Southern California. And the Tiger Woods Foundation headquarters will stay in Irvine.

But he stopped playing Riviera in 2006 after he narrowly made the cut. The only regular event in California that Woods still plays is in Torrey Pines, a two-hour drive from his hometown of Cypress in Orange County. The only time Los Angeles area golf fans could see him play was the World Challenge, a holiday event that attracts an 18-man field of players from the top 50 in the world.

This is the last year at Sherwood. Woods is moving the event to Isleworth, his old home in central Florida. Then, it could be headed to the Bahamas.

When he won the Canadian Open in 2000 with that 6-iron out of a bunker and over the water, his late father, Earl, said that day, “In every tournament, he’ll hit shots that people will be talking about for 30 years.”

One thing is certain _ Woods leaves a trail of stories behind. Here are five from his time in Southern California.

Woods was just starting kindergarten when he was invited to join Snead at Calabasas Country Club just north of LA. They played two holes, starting with a par 3. Woods hit into a creek fronting the green, and Snead suggested he just pick it up and drop it.

“That kind of ticked me off, so I decided to play it out of the water,” Woods once recalled. “I knocked it on the green and two-putted for my 4.”

Woods missed his first seven cuts on the PGA Tour, starting with the 1992 Nissan Open in his debut at age 16. He opened with a 72 and was in reasonable shape to make the cut until what his father said was a growth spurt. Woods shot 75 the next day and headed back to high school.

“I was hitting the ball good the first few days of the week, but then I suddenly outgrew my club shaft,” Woods said a year later.

His father said they didn’t figure out what happened until the tournament was over.

“He was in a growth cycle, and those teenage muscles just grew overnight,” Earl Woods said.

THE END OF RIVIERA

A beautiful afternoon off Sunset Boulevard turned nasty without warning, and Woods was on his back nine at Riviera without rain gear in 2006. He bogeyed two of his last three holes for a 74 to presumably miss the cut – until three more players dropped shots coming in and Woods made the cut on the number.

He was to be paired Saturday with J.B. Holmes, a big-hitting rookie who had just smashed his way to victory in Phoenix. The next morning, Woods was a no-show. He withdrew because of the flu, and he has not been back to Riviera since.

It was baking hot in August for the “Showdown at Sherwood” in 1999, a nationally televised exhibition against David Duval, who had returned to No. 1 in the world. Because it was not an official PGA Tour event, the caddies wore shorts.

A PGA Tour rules official ordered them to change into pants. Duval’s caddie complied. Woods’ caddie, Steve Williams, did not. The rules officials made it clear to Williams that if he did not change into trousers, it would be the last time he caddied on the PGA Tour.

Woods, listening to this conversation, interrupted by saying, “Guess I’ll be playing in Europe next year.”

Williams wore shorts. Woods won the match. And it wasn’t long before shorts were approved for caddies on the PGA Tour.

Of the five wins at his World Challenge, none was more meaningful than in 2011. One shot behind with two to play, Woods birdied his last two holes to beat Zach Johnson. It was his first win since his personal life came crashing down, a span of 26 official tournaments over 749 days.

“If he steadily progresses, keeps getting confidence and moving forward,” Jim Furyk said that day, “he’s going to return and be one of the best players in the game again.”

Woods won three times the following year, five times this year. For his swan song at Sherwood, he is No. 1 in the world.