Tim Madigan has two shot lead at The Players Cup 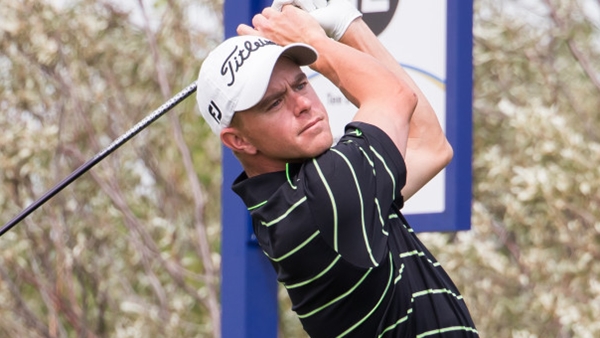 Winnipeg – Thanks to two birdies over his final four holes, Las Cruces, New Mexico’s Tim Madigan carded a 3-under 68 at Pine Ridge Golf Club on Saturday to take a two stroke lead thru 54 holes at The Players Cup.

Madigan, a 25-year old PGA Tour Canada rookie, is looking to put the exclamation point on what has been a stellar season so far that includes two top-three finishes. The New Mexico State graduate led by two shots over Fargo, North Dakota’s Josh Persons, who clipped Madigan by a shot to win the Bayview Place Island Savings Open presented by Times Colonist last month.

“There are plenty of great players behind me and anyone can play well on this course, so I’m definitely not out of the woods yet,” said Madigan, refusing to get ahead of himself with one round to go. “I just hope the lead gets bigger and bigger.”

Madigan, who earned exempt status on PGA Tour Canada this spring at the British Columbia Qualifying Tournament, has earned a wealth of experience this season, narrowly missing out on a playoff in Victoria and playing in the final group on Sunday at the Syncrude Boreal Open presented by AECON, where he finished third. Madigan said the experience has helped him to play into contention once again this week.

“Every time you’re near the lead, it definitely gives you an idea of what you need to do the next time,” Madigan said. “I’ve had enough experience with amateur golf, college golf and professional golf that I feel like I can handle it no problem. I still have to play very well because I’ve got a lot of great players behind me.”

Currently sitting fourth on the Order of Merit, Madigan has been knocking on the door for a win for some time now, both on PGA Tour Canada and elsewhere.

“I hate to put it this way, but I feel like I’m due,” Madigan said. “I’ve been close on the eGolf West Tour and a couple of times on PGA Tour Canada, so just I feel like it may be my time. I just have to not worry about it. Just get plenty of rest, and just have fun and see where all the chips land.”

Madigan and Persons will play together in the day’s final group, setting up a duel with no shortage of storylines. Persons, currently third on the Order of Merit, will be trying to chase down Madigan to secure a spot in the top three through next week’s Staal Foundation Open presented by Tbaytel.

“I really wanted to play in the last group,” said Persons, who birdied the 18th hole to sit solo second through 54 holes. “It’s where you want to be, and obviously we’re going head-to-head here, so it’ll be fun. I’m going to do the best I can, and if that’s good enough it’s good enough. If it’s not, I’ll shake his hand at the end of the day.”

One shot back of Persons was Edmonds, Washington’s Ricky McDonald, who carded a 1-under 71 to sit 6-under through three rounds.